Announcing the Palmegiano Prize in the History of Journalism

The American Historical Association is pleased to announce a new book prize to honor excellence in historical scholarship. The Eugenia M. Palmegiano Prize in the History of Journalism, to be inaugurated in 2017, will be awarded annually to the author of the most outstanding book published in English on any aspect of the history of journalism, concerning any area of the world, and any period. This prize recognizes the vital contributions that journalism history has made to our understanding of the past.

For those unfamiliar with the contribution of journalism history, Erika Pribanic-Smith, past president of the American Journalism Historians Association, shares how these scholars are creating understanding beyond the “first rough draft of history.”

Philip Graham, longtime proprietor of the Washington Post, famously told Newsweek foreign correspondents in a 1963 London speech: “So let us today drudge on about our inescapably impossible task of providing every week a first rough draft of history that will never really be completed about a world we can never really understand.” 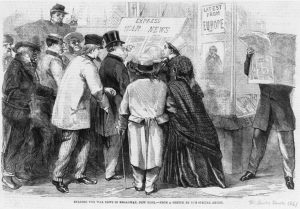 This 1861 Illustrated London News engraving of New Yorkers scrambling for information about the Civil War demonstrates the powerful intersections between media and society that journalism historians highlight in their research. Library of Congress

Journalism historians attempt to complete that draft by situating the press in context. In doing so, they add another dimension to the milieu of the time, one that recognizes journalism as an important civic institution rather than a marginal resource for other research. Since the early 19th century, journalism history books have appeared frequently, and journalism history has flourished.

In 1991, Wm. David Sloan, one of the founders of the American Journalism Historians Association (AJHA), published Perspectives on Mass Communication History. In it he outlined various frameworks that journalism historians use to interpret the past. As in other areas of history, some have adopted a “great (wo)man” approach, highlighting the contributions of specific journalists to the field. Others, most notably Pulitzer Prize-winner Frank Luther Mott, have focused more broadly on the industry, emphasizing advancements in journalism as a profession or news as a business.

A majority of journalism historians recognize that journalism never has existed in a vacuum. Whether they have studied the partisan nature of the 19th-century British press or newspapers’ role in informing Americans about racial issues during the civil rights era, journalism historians have explored the relationship between journalism and society. They have sought to establish what social, economic, political, cultural, and technological factors influenced the press and how. They have also discussed journalism’s impact on the public, including its effect on opinions and tastes as well as its participation in ideological movements. Journalism historians thus generate new ideas not only about journalism but also about the world in which journalists have operated.

In addition, journalism historians often fill gaps in the historical record. Approaching historical events with an emphasis on journalism not only provides a different perspective, but focusing heavily on journalistic sources can bring information to light that other historians may have missed. For example, a few years ago, two scholars from Ohio University uncovered in a newspaper’s archives the key to unanswered questions about the government’s attempts to prosecute American journalists under the Espionage Act during World War II. My own research showed that a gap in the archives of the Mount Vernon Ladies Association could be filled by minutes and reports published in a popular literary magazine.

In short, journalism historians have demonstrated that their field is not akin to woefully incomplete first drafts of history. The work of historians who study the press generally offers new understanding of past eras and specifically provides pieces of the historical puzzle not available elsewhere. Journalism historians will discuss their myriad interests—among them gender, race, commerce, religion, crime, free speech, politics, and war—at the AJHA’s 35th convention (St. Petersburg, Florida, October 6–9, 2016).