Advocacy in Action: AHA Sends Letter to the Texas Board of Education Regarding Proposed Mexican American Studies Textbook 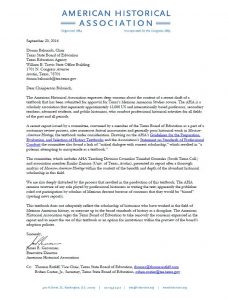 The AHA received a response almost immediately from members of the Texas State Board of Education, which emphasizes the transparency of its textbook approval process. Vice Chair Thomas Ratliff remarked on the value of the AHA’s intervention and the resources that provided a foundation for the scholarly critique of the textbook. Thanking the AHA for its contribution to the work of the board, Ratliff noted that “peer review and critical analysis help the state board, students, and the entire process.”

Grossman also conversed with the chair of the board, Donna Bahorich. In her statement at the Texas Board of Education’s public hearing regarding the textbook on September 13, Bahorich had assured “Mexican American colleagues, friends, and neighbors” that “your story is part of the American story” and “everyone deserves to have their story told in a fair an accurate manner.” With October 21 as the deadline for Mexican American Heritage’s publisher, Momentum Instruction, to respond to the Board of Education, Bahorich told Grossman, “The amount of corrections and work required will be a daunting task to accomplish, even if the publisher has a sizable team of researchers helping with the work.”

AHA members have been central to the scholarly and pedagogical critique of Mexican American Heritage since the announcement of the textbook’s submission. In testifying before the State Board of Education, AHA Teaching Division member Trinidad Gonzales recounted the numerous factual errors and racial stereotyping that render the textbook unsuitable for approval. Gonzales was part of a committee of scholars who drew on the AHA’s Guidelines for the Preparation, Evaluation, and Selection of History Textbooks and the Association’s Statement on Standards of Professional Conduct to evaluate the textbook.

As a community of historians, the AHA was especially disturbed by the process by which this flawed and polemical text was produced. According to news reports, Momentum Instruction declined to involve scholars of Mexican American descent in the creation of the textbook because it considered them biased. The AHA’s letter advised the members of the board that the “textbook does not adequately reflect the scholarship of historians who have worked in the field of Mexican American history, or measure up to the broad standards of history as a discipline.” AHA member Emilio Zamora made this point in his testimony, saying that the publishers “either do not know the literature, or they purposefully choose not to include it. Either way, it discredits the book.”

Although the fate of the textbook will not be official until November, Ratliff referred to it as “an abomination” and told the AHA “there is little, if any, support on the board to approve this in November.” We will continue to monitor this issue.

Advocacy like this is especially effective when AHA members and the Association’s Council members and staff work in tandem to create standards, apply them when the situation arises, and speak out against bias and ahistorical thinking. When the next textbook challenge arises, the AHA is ready to serve again. Our Committee on State Standards serves as a clearinghouse to connect state education representatives with knowledgeable historians who can provide feedback on K–16 standards and formal assessments.