The October issue of the AHR features four research articles, an AHR Exchange on writing the history of childhood, a roundtable review of a new book on the promise and perils of digital research, and an essay on sex and food.

The issue opens with “Sleeping in Church: Preaching, Boredom, and the Struggle for Attention in Medieval and Early Modern Europe,” by Daniel Jütte (New York Univ.). As Jütte points out, the word “boredom” was not used in English before the 18th century. Yet pre-18th-century people did experience what we think of as this modern condition. Across the confessional spectrum in premodern Europe, Jütte shows, religious somnolence was depicted as a common and grave problem. Probing medieval and early modern controversies about sleepiness and boredom, Jütte’s article invites a reconsideration of premodern culture and mentalities, revealing a struggle for attention that we would not expect to find in a world in which disenchantment did not yet prevail. 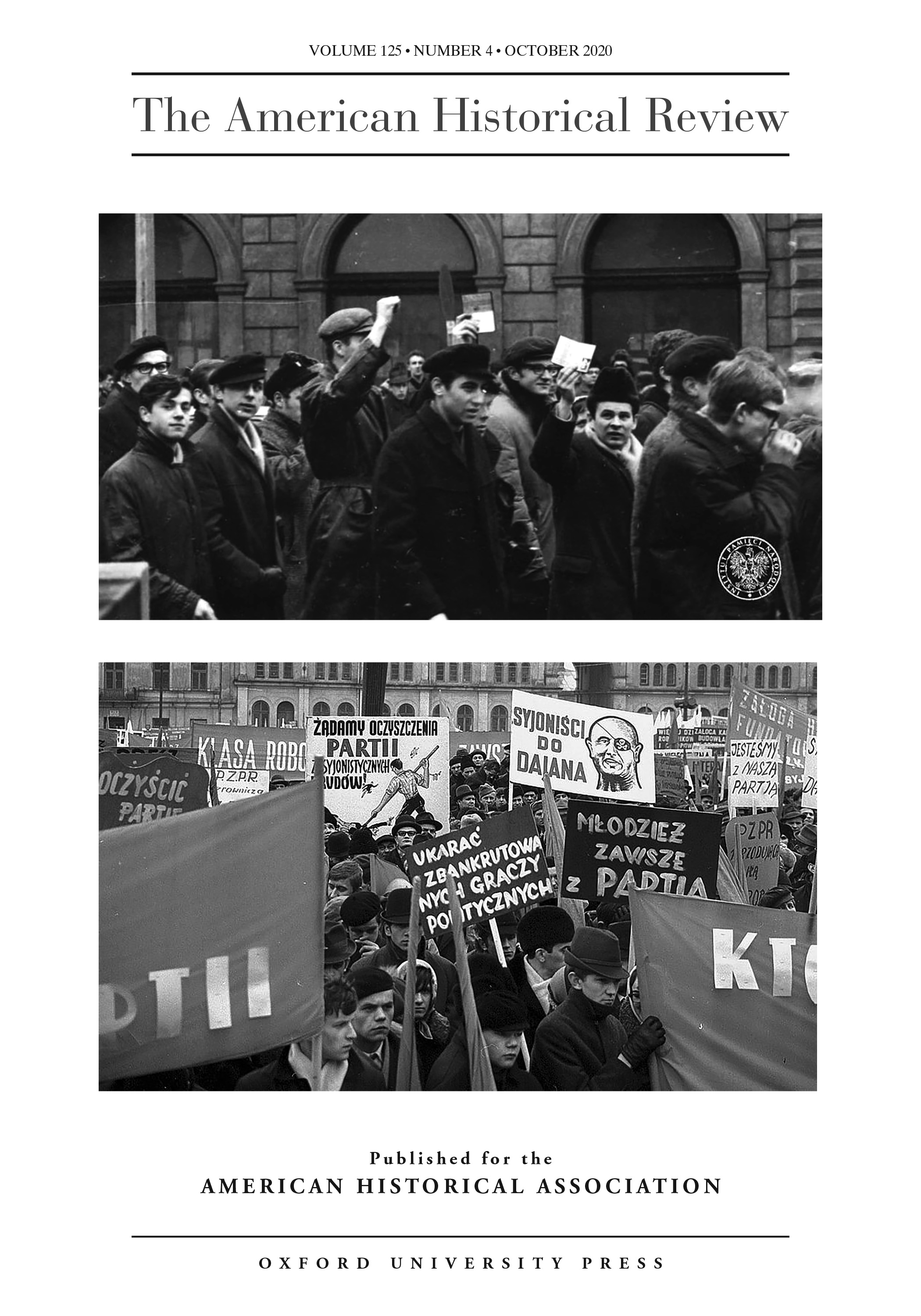 In March 1968, student and youth demonstrations erupted in Poland in support of democratic freedoms. They were met with a violent reaction and an anti-Semitic campaign from the ruling communist regime, which vilified protesters as “imperialist agents,” “Marxist revisionists,” and “Zionists.” As Malgorzata Fidelis argues in her article “Tensions of Transnationalism: Youth Rebellion, State Backlash, and 1968 in Poland,” both sides employed a “transnational imagination” related to the global Cold War, but in different ways and for divergent goals. The cover photos represent two faces of 1968 in Poland. The top image depicts students and some faculty, who are marching through the streets of Warsaw. The photograph was taken by the security apparatus and is currently the property of the Institute of National Remembrance in Warsaw. The bottom photograph depicts one of the state-organized counterdemonstrations. The image represents the official state propaganda deployed against protesters and their sympathizers. It is currently part of the collection of the Polish Press Agency (photo by Włodzimierz Wawrzynkiewicz).

The remaining full-length articles in the issue consider diverse aspects of 20th-century history. In “The Kibbutz and the Ashram: Sarvodaya Agriculture, Israeli Aid, and the Global Imaginaries of Indian Development,” Benjamin Siegel (Boston Univ.) examines the partnership between advocates of communal agricultural settlements in the new nations of Israel and postcolonial India. In the first two ­decades of Indian independence, India’s popular, nonstate program for rural social uplift partnered with Israel’s developmental apparatus to build a communal agricultural settlement at Gandhi’s former ashram. Working in the face of large-scale development, Cold War politics, and uneasy diplomatic relations between the two countries, Indian advocates of small-scale rural development saw possibilities in Israeli collective agriculture. For their part, Israelis saw their work with Indian civil society as a means of securing formal diplomatic sanction from a powerful nonaligned nation. Both projects’ initial promise of small-scale rural development eventually succumbed to the growing hegemony of the developmental state.

Ari Joskowicz (Vanderbilt Univ.) looks at the post–World War II settlement from a very different angle. In “The Age of the Witness and the Age of Surveillance: Romani Holocaust Testimony and the Perils of Digital Scholarship,” Joskowicz questions the common practice of relying on witness testimony to document atrocities. Of course, efforts to preserve the accounts of marginalized people have broadened the range of voices available to historians. Yet, Joskowicz argues, we have paid insufficient attention to the potentially disturbing consequences of the creation and distribution of such testimonies, especially in the digital age. Focusing on the experiences of Romani Holocaust survivors, he suggests that new practices of surveillance and victim-witnessing developed in tandem. Beginning in the 1960s, German prosecutors asked Romani survivors to testify about the crimes committed against them under Nazism—even as state authorities continued to criminalize and surveil Romanies across Europe. Romani witnesses, Joskowicz observes, have often had to balance the desire to have their stories heard against the fear of being listened in on. Despite its potential to empower, victim-witnessing can create new vulnerabilities, potentially exacerbated by digital technology, he concludes.

The ethical dilemmas highlighted by Joskowicz’s article can be considered alongside a “review roundtable” conducted as a conversation among digital scholars. In “History’s Future in the Age of the Internet,” Daniel Story (Univ. of California, Santa Cruz), Jo Guldi (Southern Methodist Univ.), Tim Hitchcock (Univ. of Sussex), and Michelle Moravec (Rosemont Coll.) discuss Ian Milligan’s (Univ. of Waterloo) recent book History in the Age of Abundance? How the Web Is Transforming Historical Research. Collectively, they ask how historians, librarians, archivists, and students might adapt their practices of source analysis and the organization of information to analyze the vast and often unstructured archives of internet data. Milligan responds to their interventions.

The final research article, “Tensions of Transnationalism: Youth Rebellion, State Backlash, and 1968 in Poland,” by Malgorzata Fidelis (Univ. of Illinois at Chicago), considers an unexpected element in postwar Europe: the surprisingly transnational aspect of student protest in eastern Europe. Fidelis’s article looks at Polish students who challenged the communist state’s hegemony with their own alternative interpretation of socialism during the 1960s, culminating in mass demonstrations in March 1968. In contrast to dominant narratives that depict 1968 in Poland and eastern Europe as shaped by domestic politics, Fidelis regards Polish students as active participants in a global search for a new kind of leftism. The communist regime itself, however, deployed a transnational frame against the protesters by stigmatizing them as Zionists and foreign agents alien to the Polish national community.

The October issue of features four research articles, an AHR Exchange, a roundtable review, and an essay on sex and food.

Naturally, scholars attempting to produce a social and more subjective history of children take exception to Maza’s critique. While recognizing the need for further refinement in the field’s approach to children and childhood, respondents Robin Chapdelaine (Duquesne Univ.), Steven Mintz (Univ. of Texas), Nara Milanich (Barnard Coll.), Ishita Pande (Queen’s Univ., Canada), and Bengt Sandin (Linköping Univ.) all insist that children’s voices and agency can and should remain an animating aspect of investigating the history of childhood. Readers will come away with a remarkable summary of trends in this important area of study, as well as a set of thoughtful remarks on the importance of agency in writing the history of subordinated people more generally.

Finally, the October issue includes an essay in our History Unclassified series. In “Vocabula Amatoria: A Glossary of French Culinary Sex Terms,” Rachel Hope Cleves (Univ. of Victoria) takes readers on a tour of 19th-century French-English erotic glossaries. These texts, sources of popular sexual discourse, reveal the French habit of speaking of sex in idioms drawn from the pantry and the kitchen. As such, Cleves maintains, they can serve as a valuable resource for understanding the differences between French and ­English popular attitudes toward food and sex in the late 19th century. Her essay includes many delicious selections from the glossaries; I think it safe to say that nothing like this has ever before appeared in the pages of the AHR.