Pondering the Impact of the US Presidential Election in Latin America

The outcome of the 2020 presidential election in the United States will shape the future of democracy around the world. At present, US power and influence in Latin America have seriously deteriorated. US foreign policy over the next decade could promote a constructive multilateral approach to the region’s conflicts or could further unilateralism and the decline of US influence. 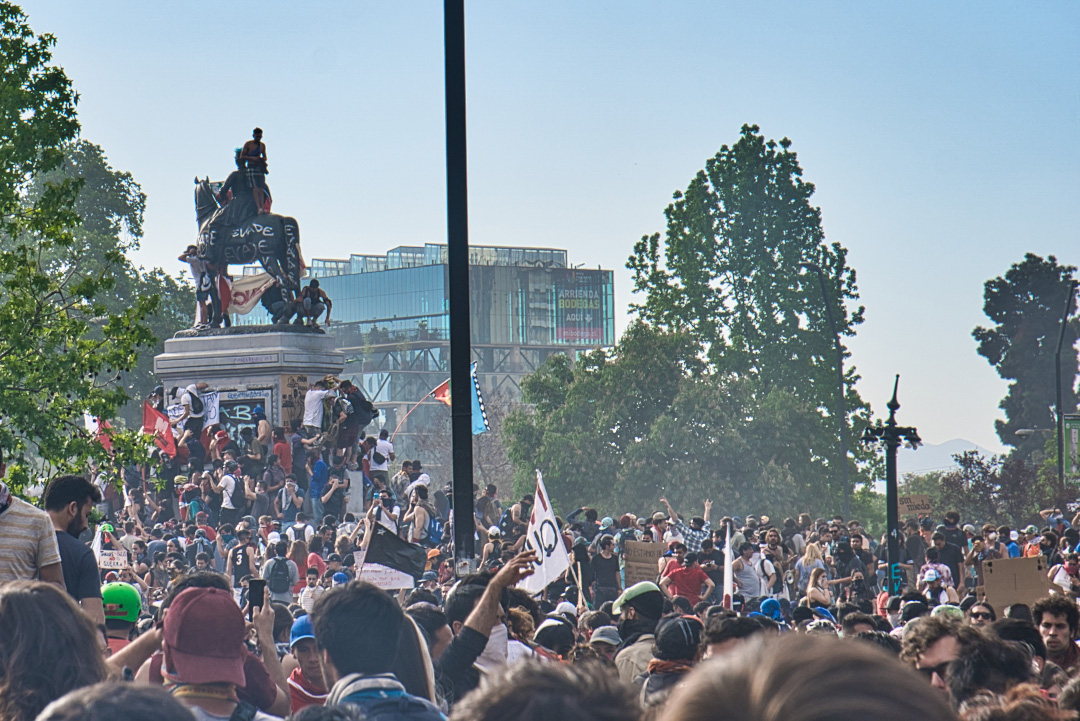 Protests broke out in Santiago and other Chilean cities in late 2019, mobilizing against the lasting effects of neoliberalism. Flickr/Felipe y Jairo Castilla/CC BY 2.0

What impact will the US presidential election have in Latin America? To what extent do President Donald Trump and Democratic nominee Joe Biden hold substantially different views on Latin America? The two candidates are closer on certain issues than many in Latin America may hope, but there is a sharp contrast between Trump’s unilateralism and Biden’s multilateralism, their foreign policy expertise, and their concern with the rapid erosion of US power in Latin America.

Trump has focused on particular issues that reflect his administration’s unilateralism—most notably, failed attempts to overthrow Venezuelan president Nicolás Maduro and the reversal of President Barack Obama’s normalization of relations between the US and Cuba. Trump’s border wall between Mexico and the US epitomizes this approach. Trump ordered the construction of a physical barrier to reduce the exodus of Central Americans to the US caused by environmental and humanitarian crises, separating the Americas. In response, Biden has faulted the Trump administration for having “wantonly abdicated” US leadership in Latin America.

But it is unclear if a Biden administration would offer more innovative policy. Historically, Biden has endorsed initiatives that prioritized support for repressive military and security forces that infringed human rights in Latin America. However, he also played a role in the normalization of US relations with Cuba. His main concerns appear to be restoring US power, in response to the growing influence of China and Russia in Latin America.

Current US foreign policy is out of touch with the region’s most critical problems, particularly the implosion of neoliberalism in Chile and the ongoing political crisis in Venezuela. In Latin American contexts, neoliberalism is both a political economy and a societal model that privileges commerce and finances over social and labor rights. Venezuela and Chile represent opposing societal models and visions of regional integration that have transformed US–Latin American relations in the past two decades. Venezuelan President Hugo Chávez (in office 1999–2013) and his successor, Maduro, became the nemeses of neoliberalism and US influence, while Chile, a US ally, championed them. Contests over neoliberalism will be at the center of US foreign policy challenges in the region for many years.

US foreign policy is out of touch with the region's most critical problems.

Neoliberalism in Latin America must be understood within the contexts of 20th-century Latin American history. Neoliberalism promoted individualism, consumerism, and intense economic competition. It involved the privatization of the health care, education, and pension systems, the sale of public lands and other state-owned resources, low wages, and the elimination of workers’ rights. These policies were embraced in response to the deep economic crisis that prevailed in Latin America in the 1980s, dubbed “the lost decade” due to massive public debts, currency devaluations, and dramatic increases in poverty across several countries. “The lost decade” epitomized the failure of nationalist economic policies that had been popular in the region since the 1950s. Latin American economists who trained abroad and financial institutions like the International Monetary Fund and the World Bank became the main promoters of neoliberalism in Latin America, and US-backed authoritarian regimes ushered in these policies during the Cold War.

The 1973 military coup in Chile that deposed President Salvador Allende, a democratically elected socialist leader, and established the Pinochet dictatorship (1973–90) illustrates this point. Pinochet’s state terror, inflicted on thousands of Chileans, matched the rise of neoliberalism, and Chile under Pinochet became a testing ground for neoliberal orthodoxy. These policies generated economic growth at great social cost in Chile as public investment in housing, education, and health care diminished substantially and the wealth gap increased exponentially in the past two decades. The result? Chile today is one of the world’s most unequal societies.

The nation is now experiencing an unprecedented mobilization against neoliberalism. Protests in Santiago and other Chilean cities shook the government of billionaire President Sebastián Piñera in late 2019. Chileans who mobilized against Piñera rejected the privatization of social and economic life, the deep social inequalities, and the 1980 constitution sanctioned under the Pinochet dictatorship, which remains the foundational governing document. In turn, Piñera ordered a crackdown against protestors. The Carabineros, a militarized police force that perpetrated systematic human rights violations during the Pinochet dictatorship, brutally repressed peaceful protests in Santiago and elsewhere.

Trump backed Piñera’s repression in Chile, appealing for the restoration of “national order” and claiming that the protests were driven by unnamed “foreign efforts.” Yet these platitudes missed the point. The implosion of neoliberalism in Chile is not the product of a foreign conspiracy, nor it can be resolved through repression. It shows the widespread public rejection of neoliberalism as a societal model and the legacies of the Pinochet dictatorship in that country.

The election of Hugo Chávez, a military officer turned socialist leader, as president of Venezuela in 1998 was another watershed in continental politics. Chávez's Bolivarian Revolution openly rejected US influence and neoliberalism in Latin America. Chávez advocated continental unity among Latin American countries, echoing the legacies of Simón Bolívar, the 19th-century leader of South American independence movements. Chávez announced his intention to build "the socialism of the 21st century" in Venezuela, forming alliances with Cuba and leftist parties and movements within Latin America. Chávez promoted the formation of the Community of Latin American and Caribbean States (CELAC), a continental organization that excludes the United States and Canada. CELAC's efforts to create an inter-American system, replacing the Organization of American States (OAS) and including Cuba, constituted a major blow to the OAS's standing and US foreign policy in the region. The OAS was founded at the outset of the Cold War under US auspices. It expelled Cuba from the inter-American system in 1962 at the height of the Cold War in Latin America.

The only feasible and desirable solution to the crisis is a domestic political negotiation with broad international support that leads to free and fair elections.

The death of Chávez and the election of Maduro as president in 2013 marked a new cycle of tensions between the United States and Venezuela that now endangers regional peace. In 2015, President Obama signed an executive order stating that the Venezuelan government posed an “unusual and extraordinary threat to the national security and foreign policy of the United States.”

Since 2019, the Trump administration has contested the legitimacy of Maduro as the constitutional president. The self-proclamation of right-wing politician Juan Guaidó as president in January 2019 and the subsequent recognition of Guaidó by the United States and nearly 50 other countries made clear the competing centers of powers in the nation. But Maduro appears to be firmly in control. Venezuela’s official armed forces and other state institutions consider Maduro the legitimate president. Civilians who benefited from Chávez’s massive social reforms support Maduro. Maduro also relies on international allies like Russia, China, Iran, and Cuba to remain in power, while also retaining significant support from other Latin American countries. The Trump administration’s efforts to topple Maduro and impose Guaidó as president of Venezuela have proved counterproductive. After more than a year, Guaidó and his supporters have lost momentum, and the institutional crisis in Venezuela has only deepened with the existence of two competing legislative bodies.

Trump ran out of political options in Venezuela. His bellicose rhetoric against Maduro sounds hollow, given Maduro’s continuing power. Risking a US conflict or a proxy war with Venezuela, a country with roughly 29 million people and a powerful army, is a dangerous option. Arguably, the only feasible and desirable solution to the crisis is a domestic political negotiation with broad international support that leads to free and fair elections. The outcome of the US presidential election may determine how likely this last alternative is.

Though Biden holds similar views on the Venezuelan crisis, Trump’s impasse in Venezuela might motivate Biden to support a political solution to the crisis. Overall, Biden advocates a multilateral approach that focuses on democratization, regional security, anticorruption, and immigration. Still, Biden shares with Trump a hostility toward Cuban socialism and Maduro’s government and support for Chilean neoliberalism. Biden could revive a Pan American rhetoric to counter the influence of China in the region and deal with the devastation generated by the COVID-19 pandemic. At the least, there is a contrast between Trump’s piecemeal approach to the region’s problems and Biden’s declared intention to implement a coherent foreign policy to restore US leadership in Latin America.

The current challenges of US foreign policy in Latin America are unprecedented. Above and beyond the growing influence of China and Russia in the region, the COVID-19 pandemic is deepening the social crisis generated by neoliberalism across the region. In this context, US policy in Latin America can facilitate political settlements to ongoing conflicts, while strengthening democracy and human rights, or it can promote further polarization and authoritarianism—with potentially devastating results.

Joaquín M. Chávez is associate professor of history at the University of Illinois at Chicago.