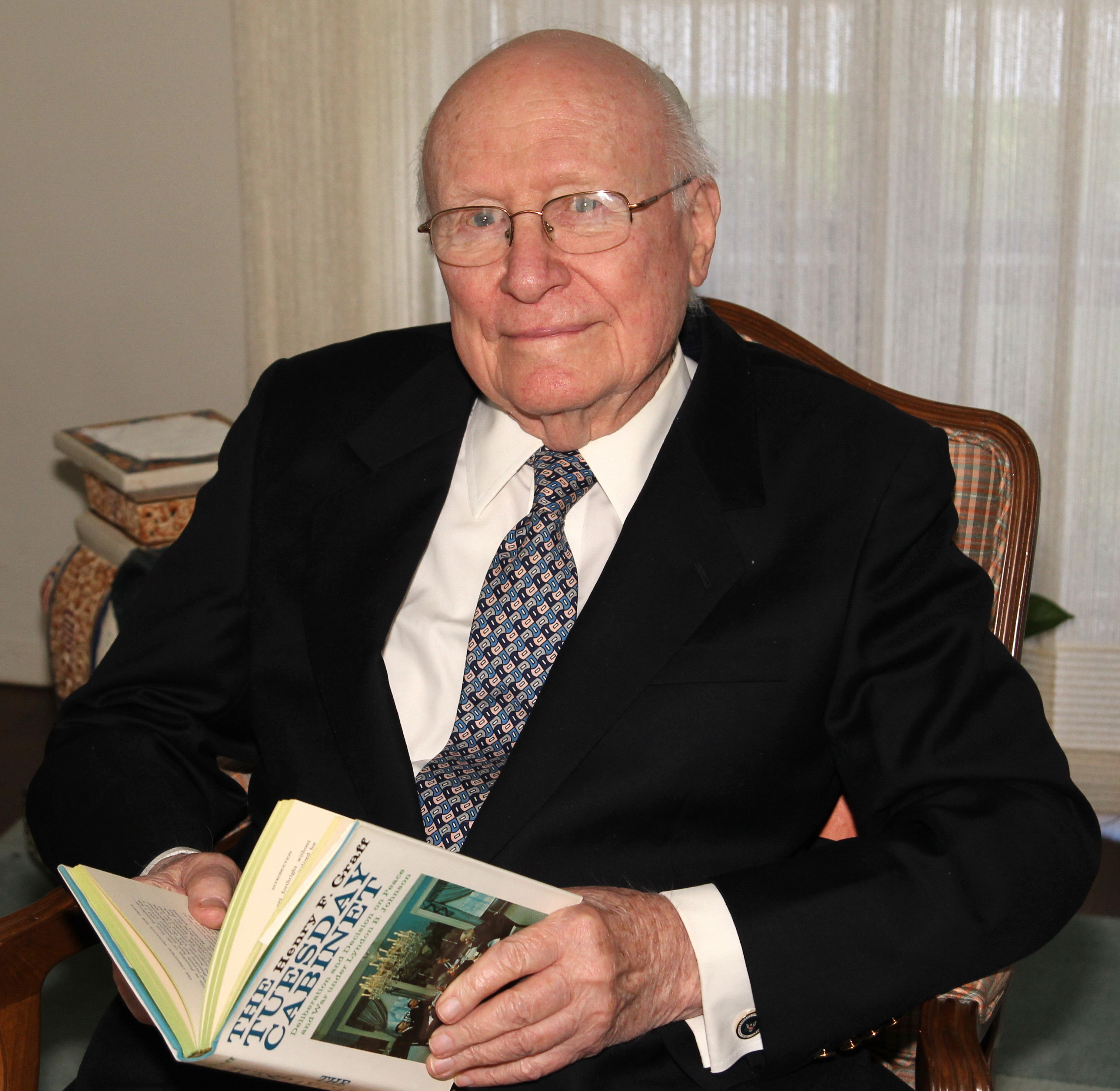 Henry F. Graff, who was associated with the Columbia University Department of History for more than 75 years, died of COVID-19 on April 7, 2020, at the age of 98. Probably no other historian in the United States knew more presidents or wrote more about them.

He was born on August 11, 1921, in New York City, the son of Florence (Morris) Graff and Samuel Graff, a garment district salesman. He had a twin sister, Myra Balber, who predeceased him. Because his family lacked the money for diversions during the Depression, Henry said, he read every history book in the nearby branch of the public library.

Henry entered graduate school at Columbia in 1941, but he remained only one year before enlisting in the US Army. He rose from private to first lieutenant in the Signal Corps, serving as a Japanese language officer and cryptanalyst in the Signal Intelligence Service. Graff’s wartime task of reading foreign codes and ciphers, particularly the now famous Purple Code, proved to be extraordinary. In November 1943, he translated part of a message from the Japanese ambassador in Germany to the Tokyo foreign office that described German plans to counter the expected Allied invasion of France. As recounted in the BBC documentary Hiroshima, he also translated a 1945 communiqué from the Japanese to the Swiss, asking for help to get them out of the war—making Graff the first American to learn of Tokyo’s imminent surrender.

Upon his honorable discharge, Graff returned to Columbia, where he earned his PhD in 1949. He married Edith Krantz in 1946. The love of his life, she died in 2019 after almost 73 years of marriage. They had two daughters, Iris Graff Morse and Ellen Graff; with his sons-in-law, Andrew Morse and Martin Fox, they blessed him with five grandchildren and five great-grandchildren.

From 1949 to 1991, Graff was a professor at Columbia, where he specialized in the history of foreign relations and the US presidency. In 1959, Harry Truman sat in on his seminar on the presidency; Gerald Ford did the same in 1989. In 1965, Lyndon Johnson appointed him to the National Historical Publications Commission, and in 1993, Bill Clinton named him to the President John F. Kennedy Assassination Records Review Board. Graff was a regular network television commentator on presidential elections and inaugurations.

A marvelous storyteller and lecturer, Henry loved to regale listeners with anecdotes about history and people he knew. Whenever you entered his office or passed him in the hall, he would practically shout your name, as if there were no one with whom he would rather visit. An avid golfer, he loved chocolate and baseball, and he treated everyone—whether janitors, waiters, or corporate executives—with the same respect and affection. Always generous, he funded the Columbia history department faculty lounge in Fayerweather Hall in 2010.

Graff was the author or editor of more than a dozen books. His first monograph was Bluejackets with Perry in Japan (New York Public Library, 1952). He co-authored, with Jacques Barzun, The Modern Researcher (Harcourt, Brace, 1957), which went through a half-dozen editions into the 21st century. His best-known general book was The Tuesday Cabinet: Deliberation and Decision on Peace and War under Lyndon B. Johnson (Prentice-Hall, 1970), which was based on his attendance at meetings of the president and his senior advisers during the Vietnam War. He also wrote a half-dozen high school and middle school textbooks, which were educational and commercial successes.

Over a long and distinguished career, Graff garnered many honors. He twice chaired the Pulitzer Prize jury in history, and he was an elected member of the Council on Foreign Relations, the Century Association, and the Society of American Historians. He won Columbia’s Great Teacher Award and the Mark Van Doren Award, awarded annually by students for humanity and distinguished teaching. And most unusually, in 2005 he received an honorary doctor of letters degree from Columbia. As one of his friends wrote, “It’s hard to be too lavish in praise of Henry Graff.” Quite simply, he lit up and enlightened every room he entered.