Fifty Years after the University of Wisconsin’s TAA Strike

This year has witnessed a remarkable number of graduate students across the US voice grievances that, while emphasizing bread-and-butter anxieties, intersect with issues amplified by the current health crisis and efforts to upend racial injustice. As 2020 also marks 50 years since the first strike by members of a graduate student workers union, the endeavors of activist graduate students prompt reflection on a longer history of organizing. Fifty years on, the University of Wisconsin–Madison’s Teaching Assistant Association (TAA) strike of 1970 stands to offer lessons in combining bread-and-butter concerns of graduate students with efforts to upend inveterate injustices through collective bargaining and university curriculum. 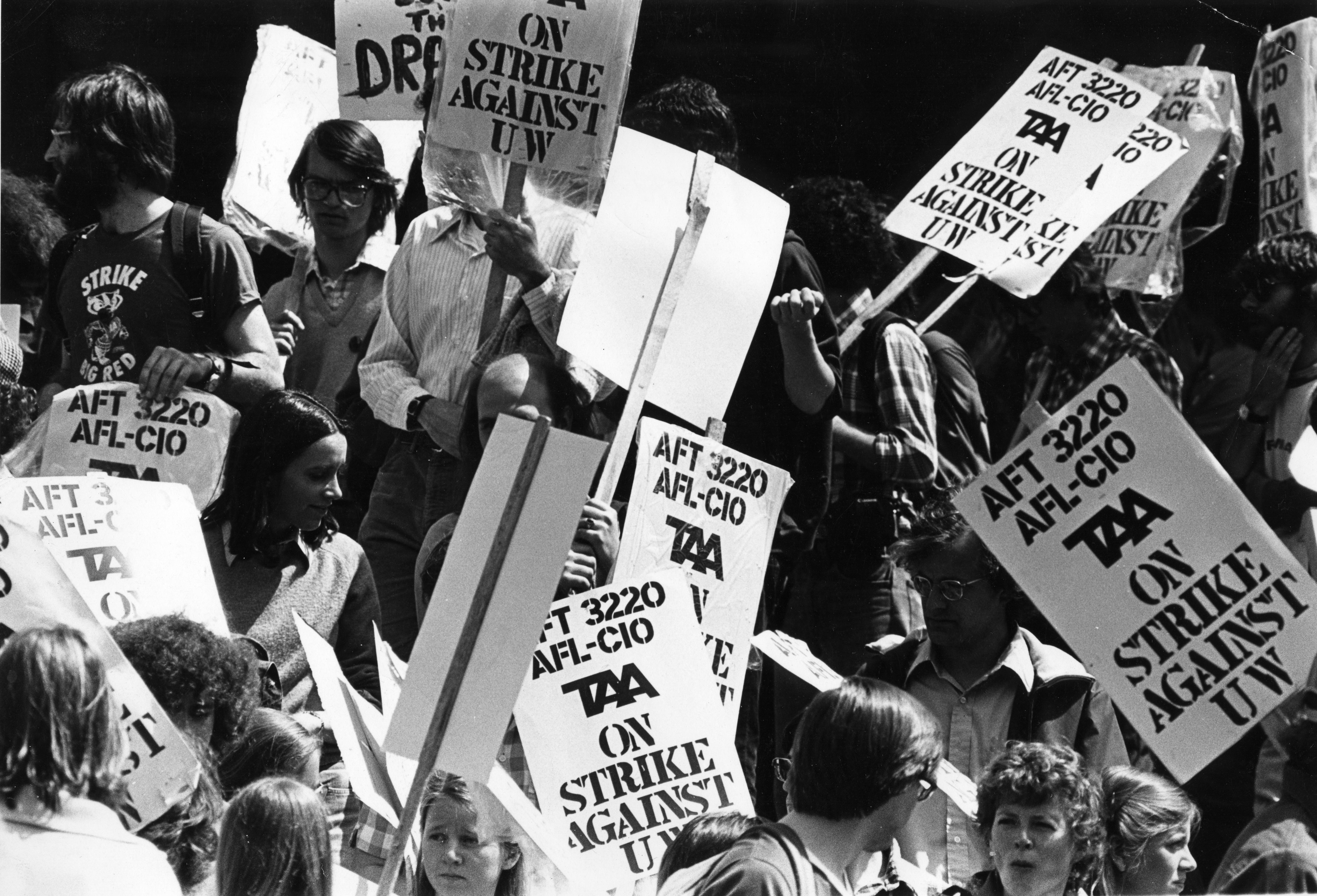 The University of Wisconsin–Madison’s Teaching Assistant Association (TAA) went on strike in 1970, the first strike by members of a graduate student workers’ union. Jon Kim / The Daily Cardinal, 1970. Used with permission.

From its start in 1966, the TAA sought graduate student representation in decision-making processes pertaining to course offerings, instruction, and curriculum. To many TAA members, reimagining education at UW coincided with tackling issues prevalent in American society. According to an October 1969 TAA newsletter, “we do right by opposing through our contract demands, union education and direct action the racism and imperialism which drain our national resources as they divide our working class.” Attitudes among many TAA members mirrored those expressed by Students for a Democratic Society’s Port Huron Statement, which declared, “experience in the universities [fail to offer] moral enlightenment. Our professors and administrators sacrifice controversy to public relations; their curriculums change more slowly than the living events of the world.”

However grand their vision, economic anxieties drove the TAA to take steps toward becoming the university’s sole collective bargaining agent for TAs. The Wisconsin state legislature’s proposal to cut out-of-state graduate students’ tuition remission in half galvanized TAA members. In response, 1,350 of 1,500 members voted to strike, but a strike would have threatened their ability to reach a collective bargaining agreement with the university. Although strikes earlier in the decade by students at the University of California, Berkeley; the University of Michigan; and Columbia University strengthened the voices and concerns of students, many TAA members believed that official recognition as a sole bargaining body offered more promise for the TAA to achieve its aims.

Wisconsin, which became the first state to grant public employees the right to collective bargaining a decade earlier, seemed ripe for the effort. On March 20, the TAA managed to collect union authorization cards from a majority of the university’s 1,850 TAs, and secured support from representatives from the local American Federation of State, County, and Municipal Employees, American Federation of Teachers, and Teamsters. The TAA confronted Chancellor H. Edwin Young and demanded recognition. To buy time, the chancellor offered alternatives aimed at limiting the terms of collective bargaining, but the TAA, seeking assurance of a stronger role in department and curriculum decision-making processes, rejected Young’s proposals.

By the end of March, Young acquiesced, and the parties agreed on a structure agreement for bargaining. Young’s decision, however, signified more than an embrace of students’ right to unionize. In a 1977 interview, he acknowledged, “I wasn’t concerned with the TAs. I was concerned with our continued relationship with the rest of the labor movement. . . . I always had to act very carefully that I didn’t appear to be anti-labor.” Young also believed that the TAA leaders’ interest in collective bargaining stood as a façade for more radical interests. As Young saw it, he was “dealing with a radical group using the guise of collective bargaining.”

As Young strategized to appear friendly to unions while ceding little, the TAA made its aims clear, resulting in deadlock. After Young recognized the TAA as the TAs’ sole bargaining agent, the university administration remained unwilling to meet the demands of TAs who called for a contract that ensured TAs played a larger role in determining curriculum, putting the bargaining efforts at an impasse. Administrative, as well as faculty, unwillingness to negotiate on this issue appears to have disregarded the fact that the existing structure agreement ensured “mechanisms in each department [that gave TAs] an opportunity to participate in a meaningful way in educational planning” and acknowledged TAs’ role in “educational planning” a “proper subject for collective bargaining.” Consequently, in early March 1970, 69 percent of the union’s members voted to strike. At 3:00 a.m. on March 16, TAs formed 31 picket lines across the campus in Madison.

The TAA won some important bread-and-butter concessions but fell short of reaching its more political aims.

Though Young decried the illegality of the strike, citing the structure agreement’s no-strike clause, the TAA found fervent undergraduate support. The chancellor continued to see the moment as a struggle for power between radical students and the university. In a special edition of the University of Wisconsin–Madison Campus Report, Young declared, “the purpose [of the strike] is to force the University to bow to power, not to reason. I assure you we will not be intimidated.” As Young boasted strong support among faculty who opposed ceding decision-making to students, undergraduates who supported the TAA confirmed that 75 percent of the university’s undergraduates participated in the strike on its first day. As they reported in the March 1970 Undergraduate Strike Bulletin, the TAA’s success promised undergraduates as well as TAs “real decision-making power [therefore] participation on the [picket] lines means participation in the classes.” TAA support among undergraduates and off-campus unions and leftist groups drove the administration into mediation within 48 hours of the start of the strike.

By April, as the TAA and university negotiated, the end of the strike seemed near. Support waned as strikers received reduced pay at the start of the month and undergraduates began returning to class. As rank-and-file TAA members increasingly felt satisfied with the latest proposal by the university, a vote on April 9 ended the strike. The TAA won some important bread-and-butter concessions, such as three to four years of guaranteed funding for TAs, a health plan, and codified grievance procedures, but fell short of reaching its more political aims relating to educational reform. Nevertheless, the TAA established a precedent for graduate worker organizing that remains vibrant 50 years on.

Alan Parkes is a PhD student at the University of Delaware. He Tweets @apark_s.