Are You Better Off than You Were Four Years Ago?

The Economy in Presidential Politics

“The economy, stupid.” “Are you better off than you were four years ago?” “A chicken for every pot.” The 2020 presidential election does not yet have a catchphrase, but the economy—hobbled by a pandemic that caused the most staggering level of job losses and business closures since the Great Depression—is front and center in former Vice President Joe Biden’s bid to deny President Donald Trump a second term. 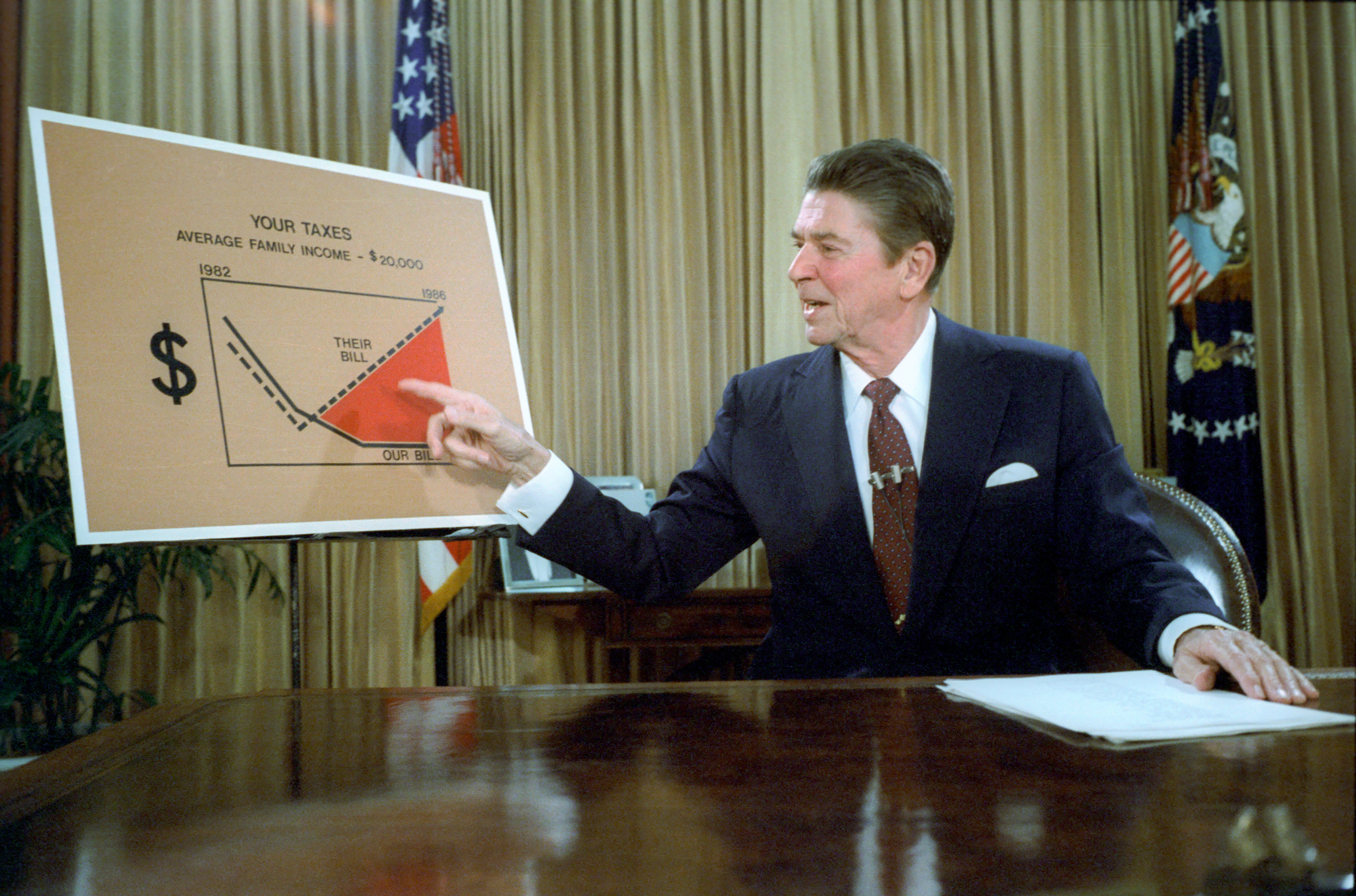 Tax cuts were a big part of the Reagan administration’s economic policy, as reflected in this image from a 1981 national address. National Archives and Records Administration/White House Photographic Office, 12008442

The two rivals have starkly different economic visions. Trump has emphasized that all we need is a return to business as usual, pushing to reopen the economy and hailing each uptick in the stock market as proof of a comeback. Biden has proposed a detailed—and expensive—agenda of job creation, infrastructure investment, and health and environmental equity.

If history is any guide, Biden has room to be bold, and Trump has good reason to want business to rebound as quickly as possible. Sunny election-year economic news helped make Dwight Eisenhower, Ronald Reagan, and Bill Clinton two-term presidents. Slumps precipitated the only presidential reelection losses in the 20th century: Herbert Hoover, Jimmy Carter, and George H. W. Bush.

But what, exactly, is “the economy”? How do voters and candidates measure it, and why do they care so much about it? The concept has been politically alluring because of its universality: nearly every American, regardless of identity or political affiliation, participates in and can be affected by its condition. At their essence, campaign-season arguments about the economy are about how much the federal government can and should do. Yet how they play out, and the metrics by which “the economy” is measured, are revealing windows into the political priorities and imperatives of the historical moment, which are particularly vivid when elections occur amid economic crises.

The 1896 battle between Republican William McKinley and Democrat William Jennings Bryan, the election historians consider the first modern campaign, was waged in the aftermath of a ruinous economic downturn, the Panic of 1893. Prosperity, according to McKinley, would be achieved by boosting business through protective tariffs and the gold standard, and “economy” (i.e., thrift) in government spending. For Bryan, economic health depended upon market interventions of a different sort, including adopting the silver standard to increase and democratize the flow of capital.

The campaigns reflected the stark regional and class divisions in America. Massive industrial strikes were met with equally massive corporate retaliation, sometimes with federal military assistance. New industries like railroads and steel surged to immense size and influence, while small farmers found themselves ensnared in a new web of global finance, where railroad barons and distant bankers set the prices they would pay and the money they would earn.

The economic debate of 1896 also reflected the small size of government. In that moment, when the modern federal financial and regulatory bureaucracy was still in its infancy, a key policy fix for “the economy” was something the US government actually controlled: the money supply.

How do voters and candidates measure the economy, and why do they care so much about it?

Bryan did not win the day, but the populist energy he harnessed contributed to a significant expansion of government power and market regulation in the decades ahead. McKinley’s brand of fiscal conservatism soon was on the wane, replaced by the progressivism of his vice president and successor, Theodore Roosevelt, and by another Democrat, Woodrow Wilson.

But the American economic system remained fragile and inequitable, leading to its greatest collapse. In the first weeks after the October 1929 stock market crash, President Hoover “determined that the Federal government should use all of its powers” to shore up the economy. But Hoover was reluctant to expand those limited powers. He believed that the government handing out cash to individuals would undermine the mutualistic spirit of what he termed “American individualism.” By the time Franklin D. Roosevelt challenged Hoover in 1932, the Democrat was running on an economic agenda far bolder, and more interventionist, than anything mainstream American politics had seen before.

For Roosevelt and the Democrats in 1932, “the economy” was measured by misery: unemployment figures, breadlines, farm foreclosures, sickness. Echoing his cousin Theodore, who in 1912 trumpeted the need for government to champion workers crushed by a punishing industrial system, FDR spoke of “the Forgotten Man.” Roosevelt envisioned a different kind of economic compact, rallying supporters to imagine an America where a federal government took a stronger role in shaping the economy—and, in turn, their individual economic futures—than it had in the past.

The Great Depression and Roosevelt’s resulting New Deal redefined the realm of the politically possible. McKinley-esque tut-tutting about deficits gave way to government spending and economic stimulus informed by the theories of British economist John Maynard Keynes, who famously declared in 1933, “Look after the unemployment, and the Budget will look after itself.” Not all of the New Deal’s interventions endured beyond Roosevelt’s first term, but those that did fundamentally changed the economic relationship between individual and government. They also cemented the president’s role as the person voters understood to be chiefly responsible for the health of the American economy.

This intensified in the wartime years of the 1940s and the quarter-century that followed. Federal policies from the GI Bill to housing policy to interstate highways helped remake American economic geography. While measures of economic inequality were at their lowest, prosperity was not evenly shared. Racial discrimination in employment and housing, and de jure and de facto educational segregation, shut out Black Americans and other racial minorities from much of the wealth that this affluent society enjoyed.

Carter’s Republican challenger, former California Governor Ronald Reagan, promised a set of economic changes as fundamentally different from the status quo as Roosevelt’s New Deal a half century before. This time, however, Reagan made the case that government should do far less, and that its size and regulatory apparatus were, in fact, chief causes of the nation’s economic suffering. “The nine most terrifying words in the English language,” Reagan later quipped, “are: I’m from the government, and I’m here to help.”

Reagan’s resounding 1980 victory helped accelerate an rightward shift in American politics. “The economy” began to be measured by the upward crawl of stock-market tickers, corporate earnings statements, and performance against overseas competitors. Market-based economic models informed not only Republican lawmakers but, increasingly, Democrats as well, especially presidential contenders like Senator Gary Hart (who ran in 1984 and 1988) and Governors Michael Dukakis (the 1988 nominee) and Bill Clinton (the 1992 victor).

The economy was again front and center in the 1992 race between Clinton, incumbent President George H. W. Bush, and independent electronics billionaire H. Ross Perot. The go-go 1980s had deflated after the end of the Cold War and other global economic realignments, and Bush further angered his Republican base by going back on an earlier promise not to raise taxes.

Clinton placed bread-and-butter issues squarely at the center of his economic agenda, promising health-care reform, job retraining and education, and other familiar features of previous Democratic campaigns. But he also added measures that left liberal constituencies anxious and charmed swing voters, including welfare reform and support of the North American Free Trade Agreement (NAFTA). At Clinton’s first State of the Union address in 1993, Apple CEO John Sculley and Federal Reserve chairman Alan Greenspan’s presence signaled the rising power of two domains—Silicon Valley and Wall Street—that would come to define the 1990s and beyond.

The growth of tech and finance also drove a growing dissonance between how “the economy” was defined politically, and the lived experience of most Americans. Starting in the late 1970s, average Americans saw their purchasing power decrease and their jobs become more precarious, while a privileged “1%” at the top became staggeringly wealthy. The inequities became even sharper in the aftermath of the market meltdown of 2008 and the subsequent Great Recession.

As they had in the tumultuous and deeply inequitable 1880s and 1930s, economic populism surged on both right and left in the 2010s, disrupting the two major parties and once again altering the realm of political possibility. Deep dissatisfaction with the political and economic status quo helped elect Donald Trump in 2016 and has propelled a surge of protest and activism throughout his presidency.

As November 2020 nears, Americans are extraordinarily, worryingly polarized about who should lead the country and what its government can and should do. But they still share a common hope: for an economy that will treat them fairly, and a president who will deliver better days ahead.

Meg Jacobs, Panic at the Pump: The Energy Crisis and the Transformation of American Politics in the 1970s (Hill and Wang, 2016)

Margaret O’Mara is Howard and Frances Keller Endowed Professor of History at the University of Washington. She tweets @margaretomara.