Who Are Those Guys? S. Paul O’Hara’s Inventing the Pinkertons 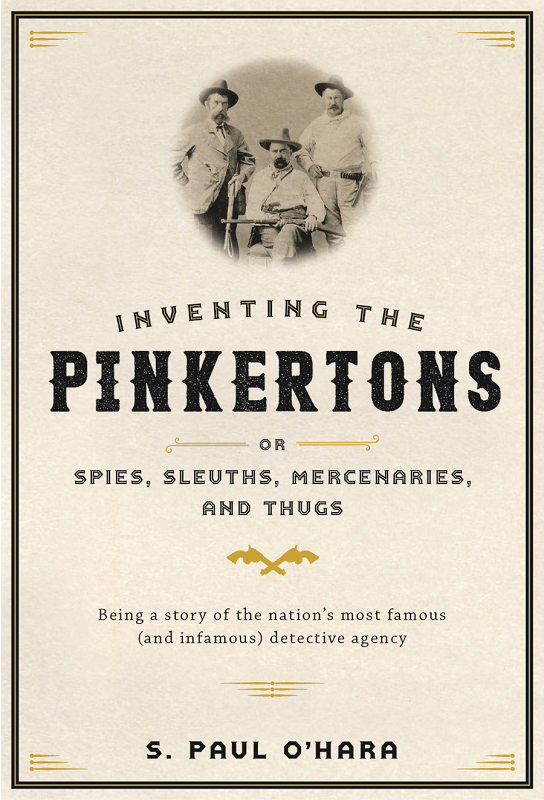 In the 1969 film Butch Cassidy and the Sundance Kid, the titular characters are pursued incessantly by a shadowy, faceless posse. Over and over, the hero bandits ask themselves, "Who are those guys?" History tells us that "those guys" were hired agents from the famed Pinkerton's National Detective Agency, but for S. Paul O'Hara, Butch and Sundance's question runs much deeper. The historian's latest book casts the Pinkertons as shape-shifters who influenced the expansion of industrialization during the Gilded Age and whose exploits left a powerful imprint on Victorian popular culture.

Inventing the Pinkertons; or, Spies, Sleuths, Mercenaries, and Thugs: Being a Story of the Nation's Most Famous (and Infamous) Detective Agency (now available from John Hopkins Univ. Press) wades through the mythology that surrounds the 150-year-old company whose agents tracked the real Butch Cassidy and his gang in the final years of the American Old West. Allan Pinkerton, an immigrant from Glasgow, established the organization in the 1850s in response to railroad companies' desire for a private detective system to fend off thievery and employee fraud. The agency gained worldwide recognition and praise for its novel investigative tactics, professionalism, and toughness, and eventually expanded the scope of its services beyond just protecting railroad shipments. Pinkerton's men conducted espionage for the Union during the Civil War and supposedly foiled an assassination plot on Abraham Lincoln. Other high-profile cases followed, including a search for infamous outlaws Frank and Jesse James. But when Gilded Age conglomerates began to hire Pinkerton agents as muscle against worker dissent, popular support foundered.

O'Hara, an associate professor of history at Xavier University, found inspiration for his work while teaching a US survey course. He noticed that the Pinkertons served as a useful framing device for teaching his students about the post–Civil War narrative. The Pinkertons' pursuit of former Confederate Jesse James tied into Reconstruction politics, as southern Democrats praised the outlaw for "redeeming the South" and frustrating northern interests. Butch Cassidy and the Sundance Kid, who fled to South America in 1901, symbolized the closing of the western frontier. Finally, the themes of industrialization and immigration were related to the Pinkertons' brutal work to quell labor unrest—undercover Pinkerton agents were routinely assigned to infiltrate ethnic neighborhoods, unions, and secret societies to root out anarchists and other militants, heightening existing cultural tensions.

During the research process, O'Hara joked to his colleagues that the Pinkertons were like a 19th-century Forrest Gump—always present, as if by accident, in the background of pivotal moments in American history. The Pinkerton story has been told before, but previous accounts have ignored this omnipresence and focused only on certain aspects of the agency. One of the most influential books about the Pinkertons, Frank Morn's "The Eye That Never Sleeps": A History of the Pinkerton National Detective Agency (1982), for example, is a business history that examines the changing nature of the police industry. Scholars have also written about the Pinkertons in the context of labor, the West, and the Civil War, but Inventing the Pinkertons captures a broader scope, connecting the agency's cultural reputation to 19th-century struggles for power and order. Also, as reflected in the book's deliberately protracted title, O'Hara's writing borrows elements of sensationalist Victorian detective novels, one of his main sources of research on the Pinkerton image.

Diverting from his original plan to write a more straightforward history, O'Hara chose to "embrace the melodrama" that characterized all contemporary accounts of the agency, including overwrought newspaper reports, dime novels, and even self-affirming tales written by Allan Pinkerton himself. Folklore followed the Pinkertons wherever they went and allowed both supporters and critics to sensationalize the agency's controversies to almost absurd degrees. Gilded Age readers craved cheap, melodramatic literature filled with acts of gallantry and frontier justice—"fact" was a malleable concept, and contradictions were the norm. Pinkerton detectives were frequent characters in these stories. Some tales romanticized the agents and their deeds; others romanticized the criminals and bandits. O'Hara argues that the public accepted this contradictory folklore because it seemed to mirror the disorienting rise of industrialism, in which labor and capital competed for leverage in the late 19th century.

In fact, O'Hara argues, the evolution of the Pinkertons from gentlemen crime-stoppers into armed mercenaries was vital to the formation of American monopoly capitalism. By way of the Pinkertons, O'Hara asserts, "American capitalists implemented and enforced new structures of order on industrial frontiers." In the postbellum period, as industrialization expanded to new areas throughout the country, capitalists became increasingly concerned with preventing crime and disorder among their work-forces. These barons distrusted state and local police forces, choosing instead to rely on privately hired guards like the Pinkertons to break strikes or arrest alleged conspirators. The Pinkertons thus became "capital's private army," procuring roles of power that previously belonged to the state and legitimizing the use of force to keep order.

The Pinkertons were like a 19th-century Forrest Gump—always present, as if by accident, in the background of pivotal moments in American history.

These new roles resulted in the agency's involvement in divisive events that damaged its reputation as a trusted brand of enforcement and order. In 1892, Pinkerton guards hired by Carnegie Steel battled with striking steelworkers in Homestead, Pennsylvania. Three Pinkerton agents and seven strikers were killed. This and other instances of industrial violence caused the media to label the Pinkertons as "thugs" working in the service of a corrupt, plutocratic elite. Harper's Weekly, for example, called the Homestead Strike "one of the most serious and disastrous riots that has ever occurred in America," placing blame on the Pinkertons and their employers for provoking the fighting.

After PR disasters like the Homestead Strike and the passage of prohibitive legislation limiting the federal government's ability to hire private investigators, state entities such as the National Guard began to take back authority that states had once allowed the Pinkertons to wield force freely. Today, Pinkerton's National Detective Agency is known simply as Pinkerton. The company is exceedingly proud of its roots, calling itself "the industry's leading provider of risk management services and solutions for organizations throughout the world." While its range of services has adapted to modern consumer demands, the word "detective" is still a part of its identity: the iconic "eye that never sleeps" remains the Pinkerton logo. The company's website also features a historical timeline detailing many of its famous assignments; the Homestead Strike is absent. It is only natural that Pinkerton would craft a laudatory image of itself, but all too obvious that many of the juicier parts of the story have been scrubbed.

Ironically, 21st-century private security firms bear more resemblance to the Gilded Age detective agency than the present-day form of Pinkerton itself. One of these private companies, Blackwater, received widespread publicity and condemnation for its role in 2007's Nisour Square massacre during the Iraq War. Comparisons between Blackwater and the 19th-century agency have only served to complicate and grow the Pinkerton mythos even more. According to O'Hara, Blackwater and similar organizations "reconfirm the lessons learned about the Gilded Age Pinkertons: it is problematic for the state to privatize the authority to kill."

Since its inception, personnel within the Pinkerton detective agency have worked meticulously to buoy the company's reputation against a society that has cast them alternately as heroes and villains. In embracing these contradictions, O'Hara rightly keeps "Who are those guys?" an open question.