The Liberal Dilemma: Can the New President Achieve Both Guns and Butter?

“Wake up every one of you to the two fronts on which our defense must be built!”

As of this writing, according to the latest polls, Hillary Clinton is poised to become the next president of the United States. Amid the onslaught of news coverage given to Donald Trump’s presidential campaign, however, too little attention has been paid to the demands sure to face “a progressive who likes to get things done” (Clinton’s words) once she steps through the doors of the Oval Office in January. 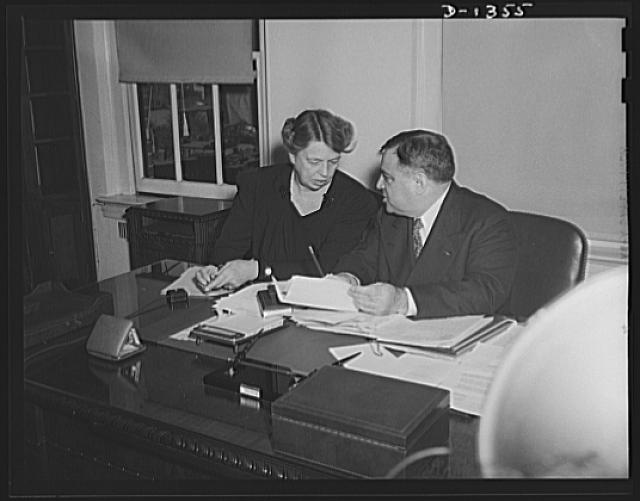 Eleanor Roosevelt and Fiorello La Guardia in the Office of Civil Defense. Library of Congress

What much of the coverage has obscured is that Hillary Clinton has campaigned assiduously on planks to intensify the war against ISIS and simultaneously to close the decades-in-the-making divide pitting the richest Americans who have seen their wealth soar against the vast majority of middle- and lower-income earners who have seen their incomes stagnate. More so than in 2008 or 2012, racial injustice in the criminal justice system and systemic racism have also become flashpoints, and Clinton has promised to tackle both head on.

Thus, her campaign—staked on pledges to step up the war against ISIS while attacking discrimination and inequality at home—has invited a fair question about her agenda: how will she achieve both “guns” and “butter” simultaneously? Can she accelerate the military campaign against ISIS, strengthen homeland defense, and launch a fresh assault against economic and social inequities?

The historical record reveals some of the challenges that lay ahead for her. In September, I had the opportunity to talk about some of these challenges, featured in my new book Defenseless Under the Night: The Roosevelt Years and the Origins of Homeland Security (2016), at the Washington History Seminar. Part of what I argued is that in the face of the fascist threat emanating from Europe, some New Deal liberals such as Fiorello H. La Guardia, New York mayor and Office of Civilian Defense director, prioritized the militarization of the home front, while other liberals including Eleanor Roosevelt prioritized enactment of a wartime New Deal.

Now, with the United States in its second decade of the war on terrorism, and with a somewhat hawkish, reform-minded progressive possibly about to become president, it’s important to recall how Roosevelt, who served as assistant director of the Office of Civilian Defense while she was first lady, and La Guardia exemplified the rift among liberals: a desire to realize social progress at home against the urge to militarize domestic society.

The Roosevelt-La Guardia battle offers a cautionary tale for a potential Clinton administration. Although Roosevelt’s vision of enshrining a wartime New Deal—childcare, nutrition advice, consumer protection, job training, defense housing—in World War II America was never totally abandoned, it was subordinated to the La Guardia-style demands of home-front militarization. Roosevelt’s notion that social uplift must be a pillar of national defense took a backseat to La Guardia’s campaign to recruit civilians to serve as air raid wardens, fire fighters, and perform other quasi-military roles. Franklin Roosevelt’s 1940 budget cut social spending; in 1943, the Civilian Conservation Corps, National Youth Administration, and Works Progress Administration, all emblems of the New Deal, died. Approximately seven million of the ten million plus civil defense volunteers opted for military rather than social justice roles. Roosevelt’s experience in the Office of Civilian Defense—she was ousted amid a national scandal in February 1942—highlights the limits of social liberalism during wartime.

The Cold War also should give Clinton pause about any president’s ability to accelerate military action abroad and domestic reforms at home, without at least paying a steep political price and at considerable cost to her social agenda. Though some like to say that presidents need to be able to “walk and chew gum” at the same time, in practice, it’s hard for them to pull off such a feat. Americans tend to be suspicious of “big government.” Thus, presidents (and Congress) have a tough time mobilizing the public to support wars on multiple fronts; often, fights against income inequality, poverty, and racism become more challenging to sustain when the nation is embroiled in a military conflict. And a president’s political capital is ultimately finite. When that capital is expended on fighting war, there is less of it left over to push through a progressive reform agenda. Finally, achieving guns and butter simultaneously runs up against the fact that limited federal resources tend to force Washington to make hard choices between social spending and military investments.

For example, Harry Truman’s decision to enter the Korean War undercut his Fair Deal and helped drop his approval rating to 23 percent by the end of 1951. His replacement—Dwight Eisenhower—preserved but refused to expand upon Roosevelt’s and Truman’s social domestic programs. Similarly, the Vietnam debacle sapped Lyndon Johnson’s credibility and helped stall his ambitious efforts to remake the role of government through his Great Society.

War did not kill reform per se, but, as liberals repeatedly learned in the mid-20th century, “guns” was hardly compatible with furnishing “butter” to the American people. To the extent that mismanaged wars have sapped the public’s trust in government, Americans have tended to sour on government activism as a whole, be it for foreign military intervention or domestic reforms. The twin pursuit of war and social progress between 1940 and 1970 has not been nearly as reconcilable as some liberals at the time had assumed.

There are no lessons here, only cautions. The biggest one is that Clinton probably will be able to step up the war on ISIS and intervene militarily in Syria only if she is willing to sacrifice some elements of her ambitious domestic agenda. Time and again, progressives who claimed that they could have both “guns and butter” butted up against the hard truth that America’s political system tends to have room for one or the other, but rarely for both. 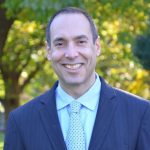 Matthew Dallek, associate professor at George Washington’s Graduate School of Political Management, is author of Defenseless Under the Night: The Roosevelt Years and the Origins of Homeland Security (Oxford Univ. Press)

Established by the AHA in 2002, the National History Center brings historians into conversations with policymakers and other leaders to stress the importance of historical perspectives in public decision-making. Today’s author, Matthew Dallek, recently presented in the NHC’s Washington History Seminar program on “Defenseless Under Night: The Roosevelt Years and the Origins of Homeland Security.”