One of the most impressive archives on the web, Voyages: The Transatlantic Slave Trade Database is the product of a massive undertaking from a network of scholars, technology experts, and government organizations from around the world who have invested thousands of hours into building a database of nearly 36,000 slaving voyages. Users can search the database using a variety of variables including a ship’s name, year of arrival, number of captives transported, outcome of voyage, embarkation and disembarkation locations, and the ship’s flag. In addition to the database, Voyages contains a wealth of maps, essays, images, animations, charts, and lesson plans that illustrate the scope and horror of what W. E. B. Du Bois called “(t)he most magnificent drama in the last thousand years of human history.” 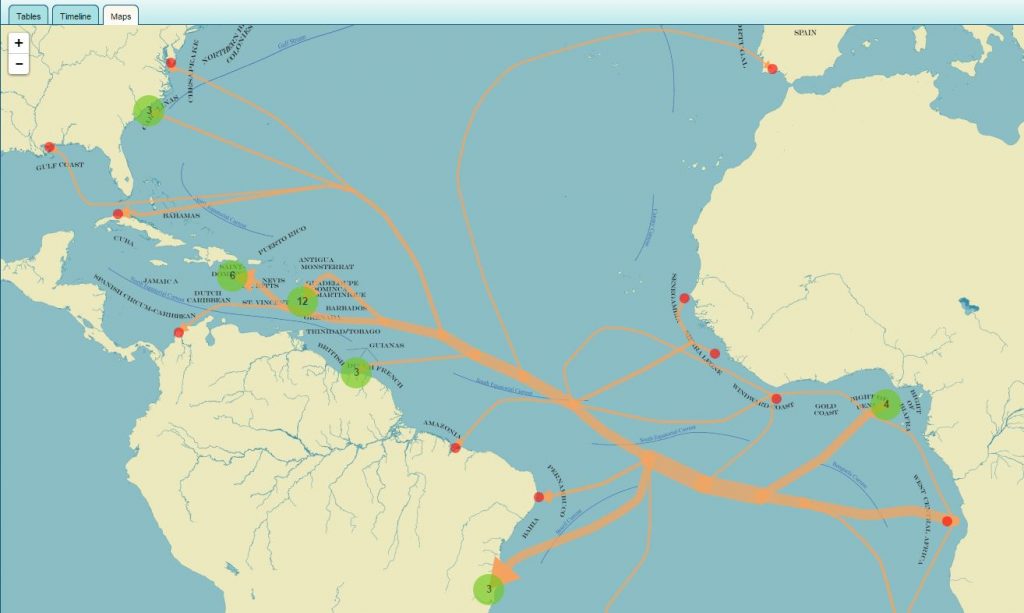 On Voyages, a map shows estimates of enslaved Africans transported across the Atlantic between 1501 and 1866.

In my 10 years as an educator, I have routinely found the days spent grappling with the slave trade to be among the most emotionally and intellectually taxing of the year. The unspeakable horrors and the mindboggling scope of the trade call for enormous sensitivity, tremendous care, and rigorous preparation from the instructor. Yet, there are few topics more important in a US, Latin American, or world history course. It is vital for students to gain a greater understanding of one of the most influential events of the past 500 years, and a detailed examination of the trade using Voyages yields enormously productive discussions on power, memory, sourcing, data literacy, and empathy.

Through its curated primary sources, easy-to-use maps, and database, Voyages is an invaluable teaching tool for examining the trade at any grade level. I begin most units on the transatlantic slave trade with an overview, using Voyage’s map detailing the overall flows of the trade from 1500–1900. I then use a targeted selection of images and maps from Voyage’s library to go over each stage of the trade, starting from capture in Africa to “seasoning” in the Americas. After hearing a few examples of the horrors of the Middle Passage drawn from Marcus Rediker’s work, the class discusses the famous image of the slave ship Brookes, analyzing the ways that propaganda, memory, and context shape our understanding of the past. Together the class and I compare the image with the 1822 drawing of the slave ship Vigilante to discuss the continuities and changes in efforts to end the trade. 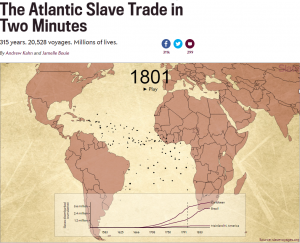 An animated interactive on Slate demonstrates the scale of the transatlantic slave trade. Designed and built by Andrew Kahn using information from Voyages.

Next, I play a 2015 Slate visualization of the Voyages data quietly without comment, waiting for students to grasp the magnitude of the trade. The haunting visualization depicts each trip along the Middle Passage as a black dot traveling from its origin in Africa to its destination in the western hemisphere. The exponential growth of voyages over the 18th century elicits gasps from my students every time I show it. (A more customizable, though less aesthetically pleasing, option with the ability to control inputs can be found as part of the Voyages database.) After asking the students about what they’ve seen, I show the visualization again and hover over a few dots, discussing what it means for more than 12.5 million people to embark and 10.7 million to disembark. While providing context is a crucial part of teaching the transatlantic slave trade, Voyages and other projects derived from it provide the resources to show, rather than tell, its tremendous cost.

Unlike other digital projects, I rarely push students to engage with the website directly in class as I have found that students tend to get lost in the database. Usually I mediate their experience with Voyages by projecting preselected searches of the database on the board. We look at the variables page and discuss which numbers are fixed by hard data and which are subject to estimation. This type of examination pushes students to become critical consumers of data, and to look at the ways that power and priorities shape historical records and memory. The discussion continues with the use of digitized shipping ledgers from Voyages and the National Archives that demonstrate the priorities of slave traders. Here I push my students to grapple with the issue of historical erasure and the ways that quantitative data can give voice to those who have been muted.

While I have found that using Voyages leads to a better understanding of the details of the trade and that it helps hone students’ historical thinking skills, I believe that one of the most valuable functions it serves is facilitating the teaching of empathy. As a historian and instructor I strive to work empathy, both in its historical and traditional sense, into my praxis. Exploring Voyages equips my students with a better understanding of the horrors of the trade and to participate in discussions of how we, who have never lived through the slave trade, can understand the motivations of both the slavers and the enslaved. I push them to explain why an understanding of the trade is important for both our historical knowledge and how it resonates with experiences today. This discussion takes time to build, but I usually find that with patience it results in one of the richest conversations of the year.

An important part of any history course is discussing how history is researched and written, and examining Voyages demonstrates the collaborative nature of “history making.” Voyages builds on decades of research on the transatlantic slave trade by historians of slavery. Voyages began in the 1990s when a group of scholars began a concerted effort to unify previously gathered records of slaving voyages from Great Britain, the Netherlands, and Portugal into a single dataset. The project expanded its search to Spain, Africa, and the Western Hemisphere. Similar to ORBIS, Voyages contains an extensive guide to the database that meticulously lays out the various ways it can be used and the methods used to gather and display its data. Currently the project estimates to have documented approximately 80 percent of all those transported and is looking to expand its connection to African Origins, a project that contains personal information such as the name, ethnicity, and language of more than 90,000 African prisoners of the slave trade. Still in its initial phases, the African Origins project adds crucial human context to the numbers.

Over the past 10 years a growing number of digital projects have examined the transatlantic slave trade, many of them relying on the Voyages database. Adam Rothman and Matt Burdumy have created three different heat maps that depict the frequency of slave voyages from the ports where slaving voyages originated, purchased their human cargo, and finished their sale. Other digital projects on the history of the slave trade include a documentary and cartographic narrative of the 1761–63 voyage of the slave ship The Unity, and rich collections of primary sources via the New York Public Library and the Digital Public Library of America. In addition, a wide range of projects examine the history of slavery in the Americas. These include projects on slave sales along the “Second Middle Passage” during the 19th century, the legal history of slavery, and a forthcoming project on slave resistance through flight.

Many of these digital projects contain lesson plans, and Voyages is not an exception. Its website contains a variety of lesson plans and assignments aimed at students in grades 6–12 that are matched with national standards for history, geography, and social studies. Below I have included two more assignments than can be adapted for students in both secondary and undergraduate classrooms. The first pushes students to use the data available through the Voyages database to create their own visualization and rationalize their choices in a written user guide. The second provides the foundation for developing historical thinking skills of causation and periodization, by asking each student to track a specific ship’s voyage and participate in a group discussion.

Have you created other assignments that use Voyages data, or have improvements for those already listed? Let me know in comments, Twitter (@johnrosinbum) or email (john.rosinbum@gmail.com)!