Teaching the History of Sexuality: Introducing the October Issue of Perspectives on History

Sporting a T-shirt reading “I Was a Lesbian Child,” a young woman grasping a handful of helium balloons gazes out from the cover of the new issue of Perspectives on History. Taken in New York City in 1992, Donna Binder’s photograph of an action by an activist group known as the Lesbian Avengers reminds us that efforts to make curricula inclusive have a history. 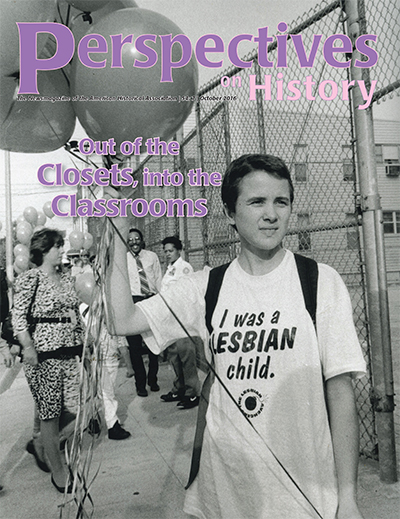 The action was inspired by the refusal of a local Queens school board to adopt the city’s ambitious “Rainbow Curriculum,” which included lessons and activities promoting multicultural awareness from kindergarten through high school. At the center of the controversy were two books (Heather Has Two Mommies and Daddy’s Roommate) listed as suggested reading for first graders, which opponents thought promoted homosexuality. With the cheeky tagline “We Recruit,” the Avengers’ drumline paraded through the district’s streets, handing out the balloons to onlookers, including children.

As the activist’s T-shirt reminds us, there was a time when the idea that lesbians, gay men, bisexuals, and transgender people had childhoods—childhoods in which many of them knew they were queer—hadn’t occurred to a number of educators and parents.

Times have changed. This past summer, California’s state board of education approved a new framework that recognizes the place of LGBT people throughout history. Joining a coalition that included teachers and activists, academic historians helped shape the new curriculum. In our cover story, Don Romesburg (Sonoma State Univ.), who was at the center of the two-year process, recounts the give-and-take necessary to widen activists’ initial desire for LGBT role models and to work with (and learn from) teachers about curriculum development. The broader lesson historians can take from Romesburg and his colleagues on the Committee on Lesbian, Gay, Bisexual, and Transgender History (an AHA affiliate) is that we can influence history curriculum at the K–12 level, and furthermore, we should.

Two additional features offer perspectives from the university classroom. Dan Royles (Florida International Univ.) and Laura L. Lovett (Univ. of Massachusetts Amherst) each argue that sexuality-related topics should be incorporated into history surveys. Providing a wealth of sources and teaching ideas, Royles shares the ways he’s incorporated the history of HIV/AIDS into the US survey. Today’s students generally have little idea about the activism it took to overcome homophobic and apathetic responses to the disease when it emerged, so lessons about it allow them to deepen their knowledge of subjects US surveys often cover: social movements, public health, and the post-1960s culture wars.

Lovett describes co-creating and teaching one of the country’s first surveys on the global history of sex since the Spanish conquest of the Americas (to accompany other departmental surveys geared to first-year students and non-majors). Students’ willingness to create and abide by respectful ground rules encouraged them to take chances in venturing comments during discussions. Yet teaching the new course included challenges, from the lack of a real textbook to dealing with Massachusetts’s 19th-century obscenity laws. Both Royles and Lovett show that historians’ efforts to evaluate the way we teach the survey—and what we teach in the first place—have led to creativity in the classroom.

October’s issue boasts a remarkable News section. Kritika Agarwal and AHA intern Sang June Oh present a complex story of a treasure trove of archival sources, the ultimate disposition of which has divided members of the Korean American community in Los Angeles. Stephanie Kingsley distills the field of book history to its essence in a Perspectives Quick Study, another entry in our occasional series that summarizes a single subject’s lineage and recent breakthroughs. Elizabeth Elliott reports on a new book about perceptions of the infamous Pinkerton Detective Agency, best known for its brutal role in the 1892 Homestead Strike. Finally, the October Perspectives launches a space for readers to keep up with the AHA’s advocacy efforts.

With registration underway for the 2017 annual meeting, the AHA staff is catching Denver fever. Perspectives offers all the need-to-know information you’ve come to expect, but we’re also pleased to feature renowned digital historian Chad Gaffield (Univ. of Ottawa) reflecting on how historians who use maps in a digital context are currently working with the annual meeting’s theme (“historical scale”). And Emily Swafford and Philippa Levine highlight the many career development resources available at the annual meeting, which run the gamut from our yearly Career Fair to a new session with academic journal editors. If you haven’t registered and booked all your travel and accommodations yet, now’s the time. We all hope to see you in the Mile High City this January. (Don’t worry about the weather.)

There’s more in this issue, and I hope you’ll dive right in. As always, you can send feedback to perspectives@historians.org and submit pitches or complete stories through our portal. We hope to hear from you.