Seoul Custody: A Discovery in LA’s Old Koreatown Sets Off a Dispute

In 2003, Los Angeles contractors renovating a modest, one-story white building—the former headquarters of the Korean National Association of North America (KNA)—made a remarkable discovery. Hidden in the attic were flags, banners, framed panoramic photographs of Seoul, early editions of the KNA's official newspaper (the New Korea), and thousands of documents detailing the group's activities in the early 20th century. These materials are unique: they portray the political and social lives of Korean Americans before the better-documented wave of transnational adoptions in the 1950s. They thus have the potential to change Asian American history by writing Korean Americans into a chapter of the historical record from which they have been largely excluded.

But where should the materials be kept? Tensions over this question led Korean American community groups to file a legal challenge in 2015 to the Korean National Association Memorial Foundation (which administers the building) and the Korean United Presbyterian Church of Los Angeles (which owns it). The parties submitted to binding arbitration, agreeing to a settlement this past March: the University of Southern California will preserve and scan the originals, which will then travel to the Independence Hall of Korea (a historical museum in Cheonan) for safekeeping until a Korean American museum in Southern California can permanently house them. But uneasiness remains among all parties. 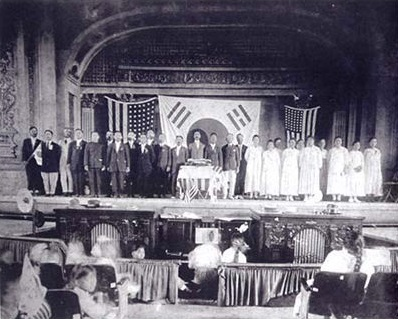 One aspect of the problem lies in the extent to which Korean immigrants historically considered themselves American. University of California, Davis, historian Richard Kim, in The Quest for Statehood (Oxford Univ. Press, 2011), estimates that between 1880 and 1902, only 50 Koreans entered the United States. Korean workers started coming to Hawaiian sugar plantations in 1903, but poor labor conditions, as well as the Japanese occupation of Korea and a subsequent ban on migration to Hawaii, forced many to the US mainland beginning in 1905. In 1924, when Congress banned all migration from Asia, there were about 10,000 Koreans in the United States. The reality of Japanese aggression made many consider themselves exiles—or "stateless 'political wanderers,'" in Kim's words.

The KNA emerged in 1909, following the arrest of two Korean immigrants in San Francisco for the murder of a high-profile American diplomat who aided the Japanese occupation. More than two dozen mutual assistance and political organizations coalesced to better pool resources and mount an expensive defense. "All the organizations of Korean residents in America shall be merged into one association for greater unification and effective resistance against Japanese atrocities in Korea," announced the terms of the merger.

Japanese occupation shaped the KNA's story, and with it the story of the growing community of Koreans in the United States. In 1913, the KNA persuaded the US secretary of state to allow it—and not the Japanese consulate—to represent the interests of Korean immigrants. It later coordinated international fundraising efforts for the Korean Provisional Government when it declared independence from Japan. In 1936, the KNA moved to 1368 W. Jefferson Blvd. in Los Angeles, where the 2003 materials were found. The small structure anchored several other Korean American organizations over the years before falling into disrepair.

The fate of the headquarters turned problematic in the 1970s, just as its significance as a historic site was coming into focus. As a condition of purchasing the building, the Korean United Presbyterian Church, located next door, agreed in 1978 to preserve it "as a historic monument of the Koreans in America" and to allow the KNA to continue using the building. The church and the KNA also selected members of a steering committee to "manage and forever preserve the artifacts and relics of our forefathers." But stewardship evidently faltered. A 1984 court ruling ordered the church to renovate and maintain the structure "for the benefit of the Korean American community in the United States and California." In 1991, the city of Los Angeles declared it a historic landmark. Known today as the Korean National Association Memorial Hall, it includes an exhibition on Korean American history and the KNA's archives, which are open to researchers.

Considering all the history that was forged in the building, it's no wonder that materials of interest to historians of Korea and Korean immigration to the Western Hemisphere soon emerged. According to Kenneth Klein, head of the East Asian Library at USC, two other troves of documents were discovered. In the 1980s, he says, the first set went to Korea and was copied and released in 24 volumes. The second came to university librarians' attention in the 1990s, when a concerned community member sought assistance with preservation. Joyce Kim, curator at USC's Korean Heritage Library, says these materials were found in a hallway and were "in a very bad situation": the building had a leaking roof, and the papers were being attacked by vermin and rot. Kim says USC "gathered the collection," chemically processed it for preservation, and digitized it. (It is now accessible to researchers around the world as the Korean American Digital Archive.) To do this work, in 1999 USC received a grant from the California State Library totaling $92,190—hardly a windfall, as grants go. USC returned the papers to the KNA Memorial Foundation, which still holds them. No public controversy ever surrounded this set of papers.

The most recent dispute started when the KNA Memorial Foundation publicly announced that it was sending the papers discovered in 2003 to the Independence Hall of Korea for safekeeping and preservation, after they had been sitting in the church building for more than a decade. The announcement, according to the 2015 complaint, came "out of the blue" and drew grave concern from the overlapping Korean American and academic communities. At a public forum, representatives of the foundation insisted that the papers were being sent to Korea because the group lacked the means to preserve them adequately. USC offered to chemically repair and digitize the materials.

But when the foundation pressed on, some community groups filed the lawsuit, which argued that the 1984 court ruling enjoined any "historical relics and materials" found in the KNA headquarters from leaving the building. The plaintiffs entreated the court to either prevent the materials from being sent to Korea at all—"if the Historic Documents are allowed to leave the shores of the United States, the community will lose its own history and legacy for good"—or to prevent the materials from being shipped in their existing brittle state. (The materials had been "sitting in a damp storage room next to the kitchen of the Church" for years, said the plaintiffs.)

After more than a year of deliberation, the two sides finally entered into a settlement that made clear that the papers were to go to Korea on a "loan basis" and required their return when a Korean American museum capable of storing and displaying them became available in Southern California. The court created a four-member committee with representatives from both sides to oversee the digitization and shipment process. At present, archivists from USC (which was not a party to the lawsuit) travel to the church building to preserve, process, and scan the collection. 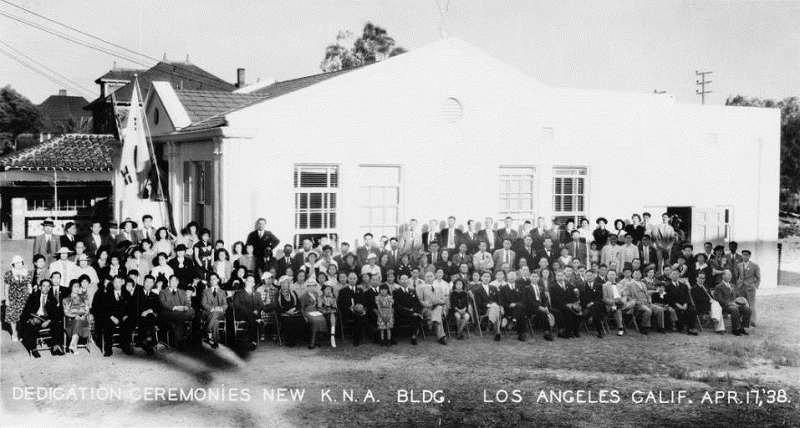 The settlement is particularly disappointing to those who want to keep the papers in the United States. Joyce Kim says that the papers represent "American history, Korean American history." These records are important to many of these first immigrants' descendants who still live in Southern California. Tom Byun, director of the Korean Culture Center, which was one of the plaintiffs, noted in a Los Angeles Times interview, "Korean Americans are part of America . . . our blood and sweat is here, our history is here."

More to the point, it is unclear how easy it would be to bring the papers back to the United States. "Once they're gone, there's no guarantee that they will be back," says David Yoo, director of the Asian American Studies Center at the University of California, Los Angeles. Korea is "invested" in having the archive, he says. USC's Kenneth Klein also notes that the Korean government has always been interested in documents related to Korea's history and the history of its diaspora. According to Yoo, it views "Korean American history as an extension of Korean history."

Klein describes a "lack of trust on all sides" of the dispute, which has kept tensions high. He notes that the university made the mistake of referring to the papers as "valuable," and that some had misinterpreted this to mean that the papers had commercial value. Both Klein and Joyce Kim say that USC's sole interest in the "attic papers" is to help future researchers, using its expertise in preservation and digitization. Digitization would seem to allow for compromise. "Originals would be nice," Kim says, but "as an academic institution we want to capture the content."

American academics also express ambivalence about the solution, acknowledging the community's claims to the original documents while hoping to have access to them. UCLA's Yoo and Wheaton College (IL) historian Hanmee Na Kim think that once the papers are sent abroad, most US academics would have access to the original records only if they could afford expensive travel to Korea. Yoo says that "while digital materials are good to take a quick look, they are not good for doing extensive, serious research." They can often be "fuzzy," depending on the quality of the digitization process, and "if you're trying to do serious work, it would be helpful to see the actual documents." Kim, who worked with the papers found in the KNA building in the 1990s, says that a determination of where the archives should be kept ought to take place into account. "As someone who has physically worked with the papers," she says, "I really appreciated going to the building and the places where the history was made. . . . It's important to connect physical spaces with the papers."

From an academic standpoint, the KNA papers present unique opportunities to develop transnational Asian American history by bringing together the histories of Korea and Korean Americans. While the two fields are "really hard to isolate one way or the other," says Hanmee Na Kim, the two often occupy separate physical as well as intellectual spaces within academic settings. Korean American studies, like Asian American studies, is interdisciplinary and grew out of student demands to include people of color in classrooms, but Korean history is more firmly rooted in history departments. What the KNA papers show, according to Kim, is that the two fields are "intertwined": during the first decades of the 20th century, the Korean diaspora in the United States was integrally involved in the movement for Korean independence.

The papers also offer an opportunity for scholars to populate Asian American history with stories of Korean Americans, who, unlike Japanese Americans, Chinese Americans, or Indian Americans, are often marginalized from both the historical record and estimations of their contributions to early Asian America. More than anything, the dispute surrounding the attic archives shows the desire for such histories to be written and to be accessible to Korean Americans. Whether the archives will help fulfill this purpose, like their fate itself, remains to be seen.

Kritika Agarwal is the AHA's associate editor, publications. She tweets @kritikaldesi. Sang June Oh, a sophomore at Johns Hopkins University, was an intern at the AHA during the summer of 2016.