Connecting the Dots between History and Policymaking: My Internship at the National History Center

When I started my MA program in history at American University in Washington, DC, last fall, I was absolutely sure I was on the track to becoming a tenured professor. I have always enjoyed discussing and analyzing history, so it seemed only natural that I would join the one profession I believed to exist that would allow me to do just that. However, as I dove into my graduate coursework and research, I began to realize that academia was not the only job option available for historians. As the AHA’s Career Diversity for Historians initiative has found, historians are sought after in the federal government, NGOs, nonprofits, corporations, STEM companies—you name it. And, DC has seemingly unlimited resources to learn about the history-grounded opportunities one can pursue after graduate school. 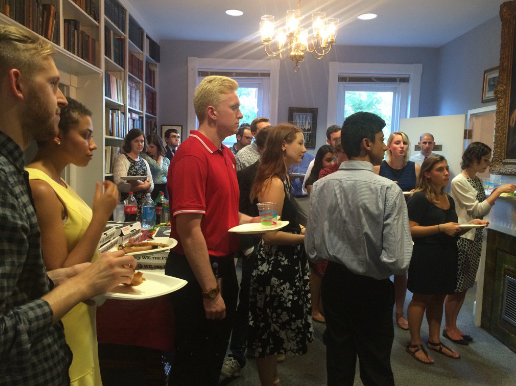 Congressional interns met at the National History Center in July to discuss the use of history throughout Capitol Hill. Photo credit: Amanda Moniz.

My search for an internship that would help me explore some of these opportunities eventually led me to the National History Center (NHC) of the American Historical Association. I was attracted to the NHC’s mission to “reinforce the critical role that history and historical knowledge play in public decision-making and civic life.” The center provided the perfect venue for me to learn about how history can inform policymaking and how historians work within the federal government. I e-mailed on an impulse, but I knew what I wanted to get out of an internship. When I interviewed for a position, I explained that I was interested in learning how policy makers think about history. A few weeks later, I discovered that I had landed a position as the NHC history and policy intern.

Over the course of the summer, I pursued my goal of learning more about policy makers and the NHC’s Congressional Briefings program. This program brings leading historians to Capitol Hill to provide congressional staff and members “with the historical background needed to understand the context of current legislative concerns.” Past briefings have provided historical perspectives to political partisanship, the Voting Rights Act of 1965, and immigration policy. One of the ways the NHC promotes its briefings program is through its Historians on the Hill group. Members of the group are Capitol Hill staffers who hold history degrees, and help disseminate information about NHC events in their offices, provide advice on potential topics, and attend Congressional Briefings. Through my internship work, I was able to help further the center’s outreach for its Congressional Briefings program in a few ways.

I organized our Historians on the Hill luncheon, where we invited members of the group to the AHA’s building to discuss how history is utilized on Capitol Hill. Each member has earned at least a BA in history and works on Capitol Hill. Attendees came from both sides of the political spectrum, and some were from nonpartisan committees. They provided useful insights on how to make our Congressional Briefings program even more successful and to have it serve as a future resource for congressional staffers. The NHC’s director, Dane Kennedy; its associate director, Amanda Moniz; and I discussed and implemented some of these ideas for our public briefing on the Zika virus. The atmosphere of the luncheon was small and intimate, so I was able to discuss and hear about how Hill staffers utilize history within their diverse professions. All attendees expressed that they consulted historical perspectives regularly in their work, which I was glad to hear.

I then organized the NHC’s third annual Congressional Briefings Program Intern Reception. A networking event for interns from congressional and think-tank offices, attendees were able to hear about the use of history on the Hill from Dane Kennedy, the American Historical Association’s executive director James Grossman, US Senate historian Betty Koed, US House of Representatives historical publications specialist Michael Murphy, and Library of Congress program specialist Jason Steinhauer. Started in 2014, the NHC has held this event every summer because it provides undergraduates (and recent graduates) a venue to think critically about how history can be used in their future careers. As this batch of summer congressional interns returns to school or begins to search for careers within the government, they will understand the use of a history degree and how historical perspectives can always inform their work and research.

Finally, I also helped with disseminating news about our programs and events to broad public audiences. I managed the center’s Twitter account (@HistoryCtr), my first time managing a professional account. While I have my own personal Twitter and Facebook accounts, I discovered that managing social media for an organization was an entirely different ballgame. All tweets and posts must utilize the same language and tone to give the appearance of a single user, even though multiple people are involved in producing content. With social media quickly becoming an important employment skill, managing the NHC’s online presence taught me how to manage a professional web presence and how to highlight key materials in Twitter’s fast-paced media platform.

With my internship ended now, I have returned to school with a renewed sense of what I can accomplish with a graduate degree in history. Having an internship during graduate school allowed me to explore different career paths outside of academia. The NHC gave me an opportunity to discuss the importance of historical perspectives and contexts with congressional staffers and interns, along with experiencing how a truly nonpartisan organization functions (something that seems to be rare in DC)! My experiences at the NHC helped me discover that, because of the versatility of a history degree, I can pursue a career in academia, in the government, in private firms, or anywhere else that fits my interests. A history degree teaches skills like researching, writing, organizing, analyzing, and project management, all of which are highly sought after by employers. Your degree is not just a physical declaration of your knowledge of the past—it is also an illustration of your ability to apply that knowledge and research to contemporary frameworks.

Rachel Van Bokkem was the National History Center’s history and policy intern during the summer of 2016. She is currently pursuing her MA in history at American University in Washington, DC, researching women and gender in the Holocaust.