A map of Europe spreads across the computer screen . . . green land, blue ocean, lightly emphasized topography . . . something we've been used to seeing since kindergarten. A timeline hovers above the map; it begins in 1450. Drag a button along the timeline, and suddenly a red node pops up on the screen in Mainz, Germany: Biblia Latina, printed by Johann Gutenberg around 1455. Continue dragging, and more red nodes appear, each signifying the first printed work of a press as the technology spread through Europe in the 15th century. Other nodes appear as well: blue for universities, yellow for paper mills, black for conflicts, and others. This is the Atlas of Early Printing, a digital book history project designed as a tool for teaching the expansion of printing in Europe alongside its socioeconomic contexts. 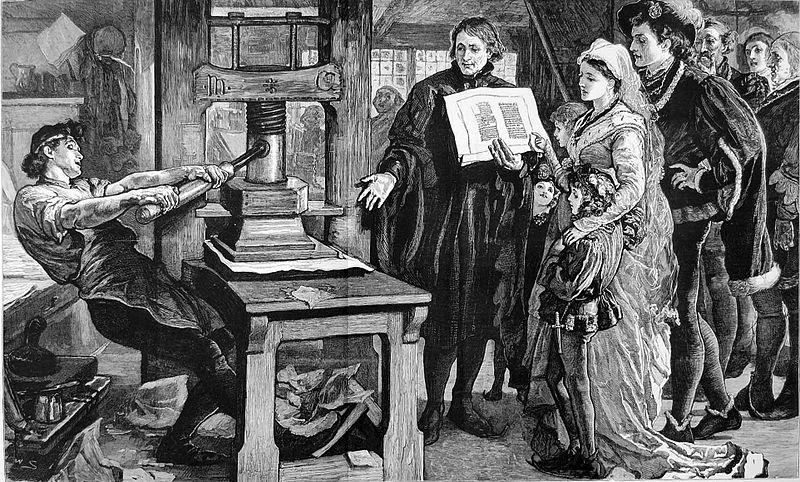 In the digital age, it may seem passé to try to school oneself in a field called "book history." But communication is vital to understanding human culture and experience, no matter the time or place. In her keynote address at the 2015 conference of the Society for the History of Authorship, Readership, and Publishing (SHARP), Leslie Howsam defined book history as a "way of thinking about how people have given material form to knowledge and stories" as well as "how forces within the media culture of an era have acted upon . . . authors and compilers." Through much of human history, the bound printed book has been a major mode of communication, and its study has produced rich insight into the past. Now, interest in non-Western cultures and the rise of digital technologies have complicated "the book" and prompted the field's expansion to include all forms of media across time and space. From Matthew Kirschenbaum's recent work on word processors to Ian Milligan's research on social media, the varied records historians must study each present their own unique "materiality." Our communications-saturated environment makes the present a compelling moment to engage this dynamic field.

"Book history" is a long-contested and ever-developing concept. It emerged from two schools of thought, both of which focused on the book in Western culture: 19th-century Anglo-American analytical bibliography, which examined the physical features of books to draw conclusions about their production, and the French scholars of histoire du livre, who in the 1960s began using a socioeconomic lens to study broad trends in publishing, writing, and reading. In 1982, Robert Darnton argued in his influential essay "What Is the History of Books?" that book history is research having to do with any of the stages of a work's life, from author to publisher to printer to bookseller to reader. Since then, scholars have debated how much to focus on the physical characteristics of books versus trends in book markets, authorship, and reading. How large a role content should play in book history has also been contested.

Many book historians use an integrated approach, examining material texts as well as external evidence, such as author correspondence and publisher records. Elizabeth Yale (Univ. of Iowa Center for the Book), for example, examines the papers of 17th-century English naturalist John Aubrey to learn about his attitude toward preservation of manuscript materials: he annotated early modern scientific manuscripts and books, using them to add his own details about the natural world. At the same time, Yale examines Aubrey's correspondence to learn about how he shared his own papers with fellow naturalists and with the Ashmolean Museum (founded in 1683). Yale argues that early modern naturalists, recognizing the posthumous value of their intellectual papers for science, began the practice of leaving personal papers with an institutional repository, and Aubrey was one of the early contributors to the Ashmolean. However, his haphazard distribution of his papers to friends and to the museum, as well as written concerns over their secure transfer, demonstrated both enthusiasm and hesitation about institutional archives.

Susan Allen, of California Rare Book School, also uses an integrated approach to investigate the economic stability and politics of colonial American printers to better understand their role in colonial political discourse. "The cost of paper was the biggest capital expense that they had to run their businesses," Allen says. Because so few publisher records survive from this period, however, Allen has had to rely on estimates of how much paper the printers used in their publications to draw conclusions about their financial security. Based on the amount of paper used in existing copies of newspapers, and knowledge about standard edition sizes at the time, Allen establishes which printers used the most paper and therefore likely had the most capital. At the same time, she examines the content of these papers to learn about the printers' political leanings.

Book historians are also increasingly using this integrated approach to study material texts beyond the Western world. The arrival of global and transnational histories and scholarship on Asia, Africa, and eastern Europe over the past several decades has altered historians' approach to the notion of "the book." In 2012, Elizabeth le Roux wrote in the journal Book History that although the history of printing in Africa begins with colonialism, the region has "a textual history that is around a thousand years older." She considers recent work in Ajami texts—manuscript works in African languages written in Arabic produced as early as the 11th century—to show how examining textual production in Africa can challenge the standard assumption that society progresses "from orality to literacy and then to print."

As the notion of the book expands in terms of medium and geography, book history's methodologies also continue to evolve. Digital technology especially provides a host of new tools with which book historians can approach their craft. The Atlas of Early Printing is one example of a digital book history project that involves mapping, a rising trend in the field. Digital tools also make it possible to answer questions book historians couldn't before. For instance, visual imaging technology allowed researchers to read the original text of the Archimedes Palimpsest, a 10th-century copy of a work by Archimedes of Syracuse that was erased and overwritten by monks in the 13th century.

Digital technology also creates opportunities for improving the way we catalog the world's books. Current development efforts on the English Short Title Catalogue (which lets users search records of books printed in the English-speaking world between 1473 and 1800) will allow it to pull information from other databases and enable researchers to add information to records.

Book history is a useful scholarly approach for any discipline that has ever communicated using texts—that is, all disciplines. For historians, who are concerned with recovering the past, book history offers tools for understanding how past cultures processed new ideas and knowledge. "It gets you certain kinds of information that you can't get any other way," says Anthony Grafton (Princeton Univ.). "If you're looking at past intellectuals who believed that most knowledge was in books, then if you can understand in detail how they read their books you have an interpretive advantage."

It is also vital to begin viewing books as artifacts rather than simply bearers of content. As David Vander Meulen (Univ. of Virginia) says, "the world comes alive" when you look closely at the book itself and take time to learn about its production. Material texts bear the evidence of intellectual transactions, not just in their content but in the way they were constructed, circulated, and read. In a world where the material forms of text and modes of communication are constantly in flux, knowledge of what has come before, achieved through a book-historical mindset, can help historians better understand both the past and the present.

Getting Started in Book History

Focus on the questions you want to answer. Elizabeth Yale explains that when she was starting out, one of her greatest challenges was "drawing broader historical arguments and . . . questions out of the mountains of detail." Yale advises never losing sight of the question you're looking to answer, because it can help you focus when analyzing your evidence.

Collaborate. Anthony Grafton notes that book historians rely on a variety of skills, ranging from those of analytical bibliography (studying watermarks, paper, and typography) to finding textual variants across multiple copies to gathering statistical data from book sales. Reach out to those who have skills you don't and ask for help.

Teach book history. Students can experience the past by handling rare books and understanding their history. Teaching book history will be the topic of SHARP's affiliate panel at the 2017 AHA annual meeting.

Remember the book itself. Vander Meulen stresses that book history should focus on the physical qualities of the book. For Yale, the field is grounded in "attention to both material texts and the social, cultural, and economic circumstances of their production and reception." Grafton notes that what unifies the field is an interest in the production and consumption of books. All agree, however, that the book is essential. No matter how broadly book historians consider the field, the "book" itself—whether it is text inscribed in stone, a medieval manuscript, the printed book, or a tweet—should always inform book history.

Stephanie Kingsley is associate editor, web content and social media, at the AHA. She tweets @KingsleySteph.