Twitter is brewing with excitement these days in anticipation of the AHA’s 131st annual meeting! Already, enthusiastic presenters and attendees are tweeting about their sessions to the hashtag #aha17. (As with last year, please help spread the word that, since A-ha stole #aha2016, we’re now using the shortened version.) 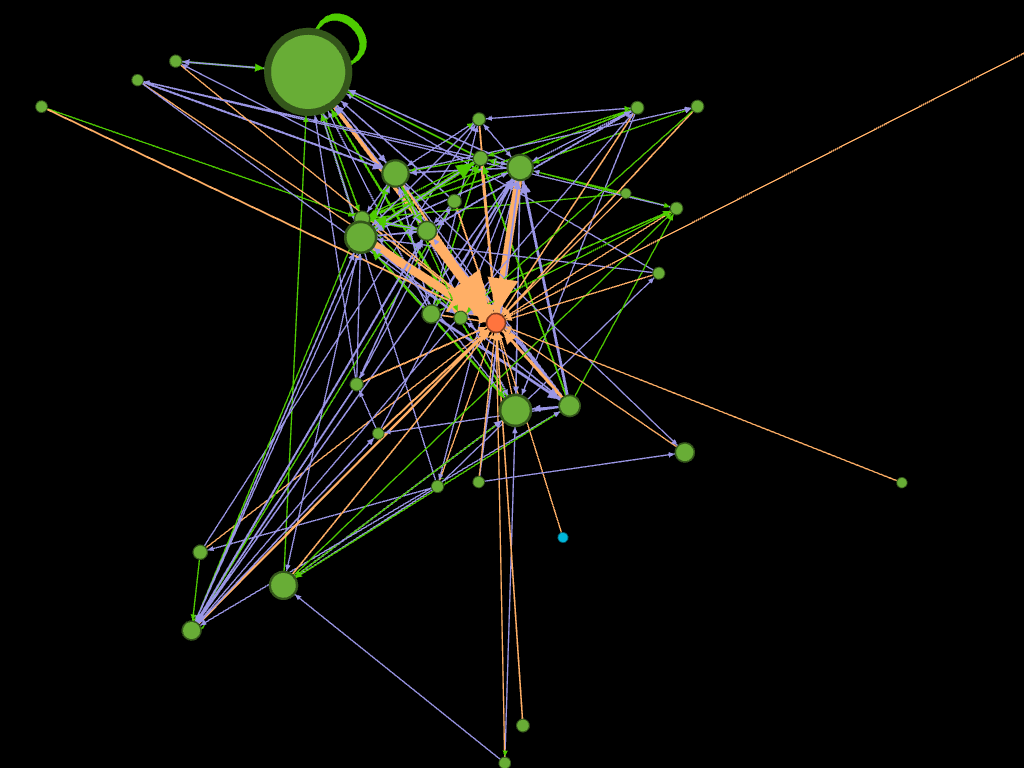 A network visualization of tweets to the #aha16 and #dighist hashtags during last year’s meeting. A well-connected group of users frequently tweeted using these hashtags while also frequently mentioning one another. The #dighist tag is represented by the orange node, while all other nodes represent Twitter users who tweeted to that tag. From “Meeting Tweeting: Insights on Making Connections from #AHA16,” Perspectives on History (April 2016).

After last year’s meeting, I wrote in Perspectives on History about how historians were using Twitter at AHA16. Despite the existence of a well-developed Twitter community, much of it consolidated around the #twitterstorians hashtag, there were a variety of smaller, interest-based communities that hadn’t established common hashtags to help unify their conversations. The result was diffused conversations and fewer connections made over Twitter.

To help historians network and communicate more effectively on Twitter while at #aha17, we are holding the #AHA17 History Hashtag Drive. In collaboration with Liz Covart, who curates an extensive “History Hashtags” list, we plan to identify the most commonly used hashtags and provide some clarity for when multiple hashtags are used for the same topic.

How the Drive Will Work

Today through Friday, November 11, we invite historians on Twitter to visit “History Hashtags” and submit any hashtags not already on the list. (Submissions will be moderated to ensure that everything on the list contains historical content.)

Then, starting Monday, November 14, and continuing every day through December 23, @AHAhistorians will tweet to #aha17hashtags announcing a topic and the hashtags commonly used to discuss that topic on Twitter. At that point, historians can reply directly to that tweet, including both their preferred hashtag and #aha17hashtags. The next morning, we will conduct a tally and announce the winning hashtag.

Before the meeting, the top-voted hashtags for each topic will be compiled and announced on AHA Today and ultimately kept on historians.org. So if you want the hashtags you use to make the list, follow @AHAhistorians and #aha17hashtags and cast your votes!

While historians on Twitter may obviously use whichever hashtags they like, we hope this list will serve as an easy reference for those unsure of which hashtags to use for certain topics. We’ll release the list in time for the annual meeting so those tweeting at #aha17 can easily connect with historians with shared interests, but we hope it will prove useful after the meeting is over, as well.

As the voting proceeds, watch here to see which hashtags are getting the most votes!