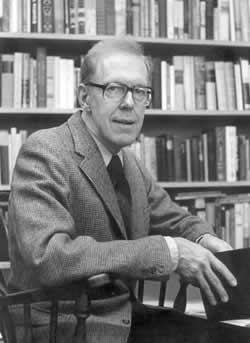 John Higham, a pathbreaking scholar of American culture and ethnicity and a leading critical voice in the discipline, died July 26, 2003, in Baltimore from a cerebral aneurism.

Higham represented the best impulses of the generation of historians that came to professional consciousness during World War II, particularly its generous hopes for the pluralistic promise of American democracy. Born in Jamaica, New York in 1920, Higham graduated from Johns Hopkins University and started graduate work at the University of Wisconsin, Madison, before serving with the U.S. army air force historical division in Italy. He returned to Madison to earn his doctorate under Merle Curti in 1949. The multi-ethnic environment of his early life in Queens, the wartime optimism, and his immersion in Progressive history, with its fundamental faith in American democracy, gave him a vision of an egalitarian, cosmopolitan, American nationalism in which he never lost faith.

Equally important was the ambition these influences gave him to, in his own words, "join historical scholarship with contemporary social concern." Surrounded by the virulent nationalisms of the postwar era, he chose to study the nativist nationalism of the Gilded Age and early 20th century. Strangers in the Land (1955, republished in 1963, 1975, and 1988) continues to dominate the field, as few works approaching the half-century mark do. The book tapped into the continuing desire of teachers and students to read about "coercive ideologies," Higham later ruefully remarked, but it owed its classic status at least as much to Higham's trademark strengths as an historian: its clarifying distinctions, the elegant structure of its argument, and graceful prose.

With an article published in the American Historical Review in 1962, Higham was the first to name and to criticize "consensus" history, which he regarded as smugly self-congratulatory and as obscuring diversity and conflict in the American past. In contrast, he called for a return to moral engagement and for deeper, more humane standards of moral judgment. In 1965, he produced a synoptic view of the Americanist wing of the historical profession, History: Professional Scholarship in America, and the next year, an essay appeared in Writing American History on the schism in American scholarship between science and the humanities, both of which explored continuing tensions between professional specialization and democratic education.

These works, too, set frameworks of analysis that have not been superceded. The historical moment was changing, however. The younger generation of historians who enthusiastically embraced his call for moral engagement often took it in a political direction he regarded as extreme. He welcomed the civil rights movement and marched in Selma in 1965 with a group of liberal historians, but he regretted the separatism and fragmentation that seemed to engulf American society and historiography after the late 1960s.

Characteristically, Higham met this turn of events not as an occasion for recrimination, but for historical exploration. He turned from study of nativism to ethnicity, focusing on how ethnic groups related to each other and to the nation in Send These to Me (1975, 1984). Trained in intellectual history at a time when it was a generalist's field with legs in both intellectual and social history, he took a comprehensive view of American culture. With classic essays in Writing American History, he identified major turning points in American culture in the 1850s and 1890s and insightfully linked high and popular culture. In 1977, when American intellectual historians were being challenged by the new social history, he and Paul Conkin brought together a younger generation of scholars to take stock and explore new approaches. The conference and the book that followed (New Directions in American Intellectual History, 1979) helped to sustain and revive the field.

Always taking the broad view, much of his work in ethnicity, cultural history, and historiography was informed by comparative analysis. By the early 1990s he was in position to address the new versions of his continuing issues—multiculturalism, historical synthesis, and the internationalization of American history. In essays collected in Hanging Together (2001), as well as in a retrospective look at Strangers in the Land (Reviews in American History, 28:327–39), he combined judicious criticism with his lifelong commitment to a pluralist, liberal nationalism. He sought to "correct old [insights] by taking account of changes around me," and succeeded to a remarkable degree.

Higham taught at UCLA, Rutgers, Columbia University and the University of Michigan before returning to Johns Hopkins in 1971 as John Martin Vincent Professor of History. He was elected president of the Organization of American Historians in 1973 and held a number of prestigious fellowship and lectureship appointments in the United States and abroad, among them a term as Directeur d'etudes associe, Ecoles des hautes etudes en sciences sociales in Paris, 1981–82, where he found the intellectual life and style of thought wonderfully congenial.

Both as teacher and colleague, his seriousness about ideas and the rigor he expected of himself and others made him a formidable intellectual presence and gave him a central place in the Hopkins seminar. At the same time, he was a conscientious mentor and balanced critic, as more than two dozen students who completed doctorates under his supervision, and many other fledgling scholars whom he encouraged, can attest. As a commentator at conferences and reviewer of books, roles he frequently took, he showed a rare ability to focus on the strengths of the work at hand and yet to convey its limitations, without impugning the author. He retired to emeritus status in 1989 but continued to write and to revise his thinking until the night before his death. Fittingly, both the American Historical Association and the Immigration and Ethnic History Society gave him their Lifetime Achievement awards last year.

Higham is survived by his wife of 55 years, Dr. Eileen Moss, a clinical psychologist, four children, and seven grandchildren.