Women’s history scholars, along with older feminist activists, watched the recent television series Mrs. America with critical interest. As the Hulu series revisited Phyllis Schlafly’s conservative campaign against second-wave feminism, it paid subtle homage to lesbian activists of the 1970s by using Cris Williamson’s anthem “Song of the Soul” during the eighth episode. That choice sparked exciting discussion on the use of historic sources from a still-active women’s music movement. 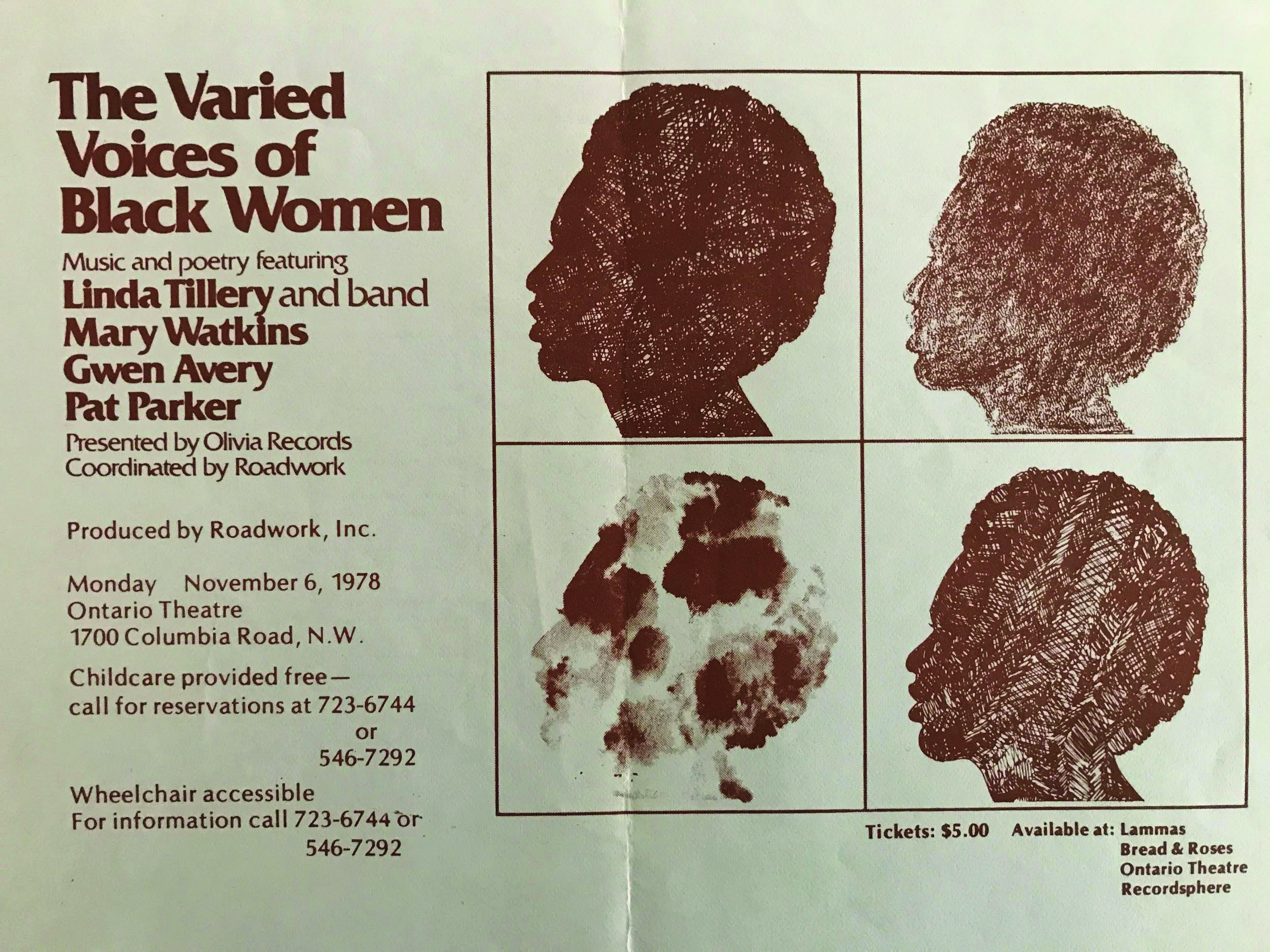 The women’s music movement was an intersectional, woman-loving genre made by a diverse field of musicians. Courtesy Roadwork

A beloved selection from Williamson’s iconic 1975 Olivia Records album The Changer and the Changed, “Song of the Soul” represents (to those who were there) empowered gatherings of lesbians at women-only concerts and festivals. Changer became the best-selling release of Olivia Records, a company formed in 1973 as a radical collective of five lesbians in Washington, DC, dedicated to producing music by women, for women. From the early 1970s to the 21st century, women’s music audiences linked arms to sing along with Cris Williamson and other independent recording artists. Hundreds of albums from a diverse field of musicians fostered an intersectional, woman-loving genre, popularized in pre-internet America by word of mouth, the direct-mail services Ladyslipper and Goldenrod, and a year-round calendar of festivals. Those nights of community ingathering, packed with songs validating women’s lives and relationships, serenaded the push for lesbian rights.

Both drawing on and differing from other genres of protest music, women’s music offered truth-telling about women’s lived experiences unheard in any other media. Concert nights were simultaneously artistic, political, and romantic, radicalizing audiences with competent women in charge of sound and light production. Taken home on vinyl or cassettes to replay over and over, the music was a precious affirmation for lesbians through times of rampant homophobia. As women’s music radio hosts promoted new artists over college airwaves, songs entered the homes and cars of still-closeted listeners.

Mrs. America is the third time in 2020 that television programming has offered authentic, relevant material from the women’s music movement, following the PBS American Masters special on singer Holly Near and the documentary Rise Up! Songs of the Women’s Liberation Movement. This year also marks the debut of two documentary films, TJ Parsell’s Invisible: Gay Women in Southern Music and Jen Rainin’s Ahead of the Curve (Curve magazine popularized many lesbian artists in the 1990s). The sudden attention and visibility can feel overwhelming to those who spent four decades building a closely guarded, vibrant subculture. Having achieved steady gains in lesbian civil rights over long, difficult years, former activists are amused to watch “our” underground music movement gain historical value.

Olivia Records will celebrate its 50th anniversary in 2023, and the original albums and performers are attracting long-overdue scholarly interest from graduate students, the New York Times, the Library of Congress, and archives. Mainstream and independent projects alike increasingly feature women’s music materials as sources useful to historians, ethnomusicologists, journalists, and LGBT community librarians.

Hundreds of albums fostered an intersectional genre, popularized by word of mouth, direct-mail services, and festivals.

This is my own work as a writer and historian: I archive women’s music documents and storylines, promote their inclusion in the LGBTQ history canon, and situate women’s music activism as a specific historical wave of lesbian performance culture and networking in the 1970s, ’80s, and ’90s. An extended community of performers, producers, promoters, and publishers is dedicated to preserving this legacy. What was the women’s music movement, and how will historians interpret it once the original participants are gone? For original, still-active fans, there is concern in seeing today’s generation dismiss women-only productions as essentialist or transphobic. However, the present collapsing (into “queer”) and expansion (into LGBTQIAA+) of sexual minority identities blurs important historical distinctions. In the post-Stonewall era, lesbians were not always welcome or at home in gay male performance culture, bars, and cruising spaces. Different ideals and practices shaped lesbian subcultures in the 1970s, creating a grassroots network of stages, land retreats, and woman-identified recordings. By 1972, “women’s music” served as a euphemism for lesbian music, identity, and social organizing. Small clubs, touring, and house concerts helped talented artists build a songbook of lesbian-affirming material as an antidote to mainstream radio’s homophobia and misogyny.

This alternative soundtrack of female storylines in every style of music created a new lesbian consumer demographic. From the mid 1970s on, album releases by independent recording companies Olivia and Redwood, a calendar of artist concerts (many produced by the company Roadwork), and a buffet of music festivals energized formerly isolated women. Fans traveled across the country to mass gatherings, such as the Michigan Womyn’s Music Festival (1976–2015), where audience sizes could top 9,000. Attendees experienced evening music performances that complemented daytime workshops on every feminist issue from racism to breast cancer. Onstage and off, artists mobilized new fans into active political participation; before the age of social media, concert events offered information and feminist resources. Festivals and concerts, as alternatives to bar culture, also revolutionized formerly alcohol-centered, over-21 limits around lesbian social events. Intentional inclusion of deaf and physically disabled women introduced new practices: sign-language interpreters onstage, accessible seating up front. For thousands of women who participated in women’s music as artists, activists, or production staff, summers meant working at festivals scheduled in 25 different states; a few, held at public sites, allowed men in concert audiences, thus enlightening my own father. Two long-established Midwestern productions continue today: the National Women’s Music Festival and the Ohio Lesbian Festival. However, audiences and artists are now in their 60s and 70s, some opting for cruises instead of campsites. In 1989, Olivia Records began expanding into today’s successful Olivia Travel company (which, in 2020, has temporarily migrated artists and audiences to online concerts).

With so many original women’s music activists alive and writing memoirs, this is an ideal time for interviews, oral histories, and funding for LGBTQ archives, in preparation for massive donations of material by movement elders. As Olivia’s archivist, I receive poignant emails every week from aging lesbians who ask: “Will anyone remember the concerts and festivals we produced? What should I do with my women’s music collection?”

This is an ideal time for oral histories and funding for archives, in preparation for donations of material by movement elders.

Regional and academic archives are indeed acquiring donations of women’s music and lesbian culture. New visitors and potential donors will find that research protocols, finding aids, and holdings vary widely, as discussed in the anthology Out of the Closet, Into the Archives. The beautifully stuffed shelves and file cabinets of the Lesbian Herstory Archives house in Park Slope, Brooklyn, New York, replete with cassettes, albums, flyers, books, and mementoes, are best experienced in person, but much is available online. Likewise, the June L. Mazer Archives in Los Angeles offers delicious rummaging through framed concert posters, photos, and performers’ touring ephemera. University institutions with women’s music archives include Michigan State University, where Special Collections recently acquired the records of the Michigan Womyn’s Music Festival and Goldenrod Music.

On the east coast, one finds the papers of artists Holly Near, Alix Dobkin, and Rhiannon in the Schlesinger Library, and an entire women’s music section of the Sophia Smith Collection at Smith College, featuring works by the late Kay Gardner and Ronnie Gilbert and the papers of sound engineer Boden Sandstrom. Ladyslipper Records’ catalogs and artist files are at Duke University, but duplicate music recordings also went to the Southern Folklife Collection at the University of North Carolina at Chapel Hill, bridging two traditionally rival schools.

From home, any interested scholar or fan may review women’s music journalism in the entire print run of HOT WIRE: The Journal of Women’s Music and Culture, which covered concerts and festivals from 1984 to 1994. It’s been digitized thanks to the ongoing efforts of its publisher, Toni Armstrong Jr. HOT WIRE’s legacy has been an ongoing feature at Chicago’s Gerber/Hart Library and Archives. The production history of Olivia Records is evident in all of the aforementioned collections; Olivia’s present-day offices also house an archive of albums, cassettes, CDs, VHS tapes, company notes, artists’ publicity kits, and rare recordings.

Last summer’s 50th anniversary of the 1969 Stonewall Inn uprising prompted a full year of commemoration by historians, including published anthologies, panel discussions at conferences, and a groundbreaking LGBTQ history display case at the entrance to the Smithsonian’s National Museum of American History. These efforts in both public and academic life granted further visibility and credibility to the established LGBTQ history field. However, primary attention went to the contributions and experiences of gay men and trans activists at Stonewall. Lesbian-specific narratives on the cultural uprisings of the 1970s were buried, muted, or excluded. That can be rectified as we approach the 50-year anniversaries of the women’s music movement, which deserves equivalent inscription as an activism with female experiences—and oppression—as its focus. Albums such as Olivia’s 1977 release Lesbian Concentrate pair well with other social-justice documents in a history classroom. The music offers a map of the changing America in which women gathered to unlearn racism, demand sexual freedom, and expose misogyny in popular culture—an activist movement with a soundtrack that reached far beyond its dedication to uplifting lesbian lives.

Bonnie J. Morris is a lecturer in the history department at University of California, Berkeley, the archivist for Olivia Records, and the author of 17 books.