A History Department Starts a Podcast

One of the most exciting developments in the historical profession has been a move toward more diverse platforms for presentation to a broader public. The University of Michigan Department of History’s podcast, Reverb Effect, launched in 2019, challenges graduate students to imagine orally communicating their scholarship beyond the lecture or conference presentation. Designed as a core element of the department’s increasingly diversified professionalization efforts and funded in part by a Career Diversity Implementation Grant from the AHA, the podcast functions as a training tool for graduate students. It offers opportunities for development in communication, digital skills, and collaborative and creative work. As the host and season producer for its inaugural season, I oversaw seven episodes that explore (as the series tagline proclaims), “how the past reverberates in the present.” Episodes covered topics as diverse as street harassment, global disinformation campaigns, expanding systems of police power, and more. 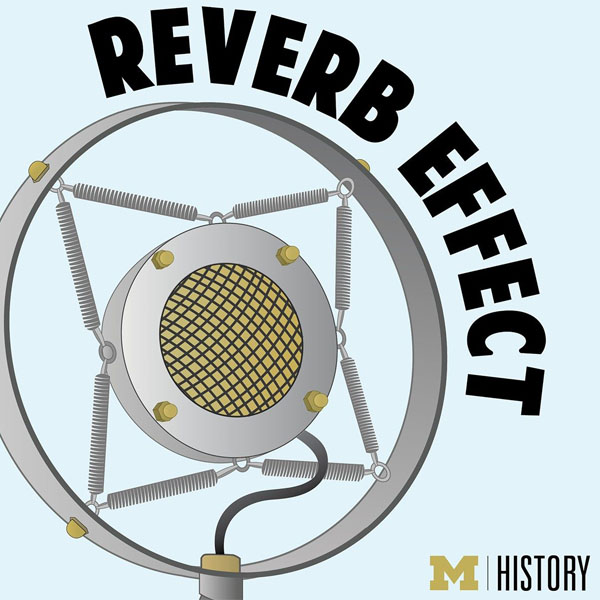 Designed to appeal to a general public, Reverb Effect joins an increasing list of public engagement projects that offer historical context for current events. It is the first department-sponsored, graduate student–run program of its kind and was born of the need to expand career options for history PhDs by imparting skills in nontraditional methods of narrative writing, audio production, and digital literacy. Moreover, Michigan is rethinking how we frame public engagement projects within the academy. For a long time, such projects remained on the margins, a summer assignment, a Plan B of sorts. Reverb Effect, however, is fully integrated into the semester schedule. Its host and season producer holds the Gerald Saxon Brown Digital Skills Fellowship, a funding opportunity designed specifically so that a student can allocate work hours to developing much-needed skills in the digital realm.

The production team and segment producers—graduate students tasked with writing, recording, and editing the bulk of their own episodes—discovered varied modes of storytelling and audio techniques to best suit a public platform. I asked several segment producers to share what attracted them to the project, and what they learned about distilling their research for a public audience.

Although recent graduate J. Martin Vest was initially drawn to the project simply because it provided a platform to share the wax cylinder family recordings he worked with, he quickly realized the value the production process added to his scholarship. “As I began to experiment with the medium, it forced me to think more deliberately about storytelling,” he said. “As scholars, we're kind of ‘naked’ when podcasting. No footnotes. No long theoretical or historiographical digressions. The narrative itself has to do much of that work, and all of that has forced me to re-think some things I do in my traditional research and writing.”

Reverb Effect is the first department-sponsored, graduate student–run program of its kind and was born of the need to expand career options for history PhDs.

As season producer, I learned to make some important adjustments to my own storytelling. In producing my episode, I tried several ways to explain the experiences of neighborhood change in Queens, New York. Ultimately, I found that it was more effective to let my subjects speak for themselves, and I included several clips from oral history interviews conducted as part of my dissertation research. Unbound by the conventions of the discipline, the interviewees brought an authenticity and richness of expression to these stories that I could not have replicated.

PhD candidates Alexander Stephens and Gerson Rosales considered the intersection of their two projects on the podcast. For them, their episode detailing migrant detention centers in the United States presented an exciting opportunity to think through some of their questions in a medium other than an article or monograph. Stephens shared, “When we learned that people from [El Salvador and Cuba] had been held in the same immigrant prison at almost the exact same time, we saw it as a chance to tell aspects of those stories together.” To tell this intertwined story, Stephens and Rosales entered the recording booth to discuss their overlapping research on the topic. They interspersed this conversation with media sound bites and edited it for narrative arc. They saw their episode, in part, as a means to not only discuss the “the ongoing history of migration in the US and around the world as an unprecedented number of people are displaced,” but also as an opportunity to “strengthen [their] analysis and emerging strategies for change.”

Their episode detailing migrant detention centers in the United States presented an exciting opportunity to think through some of their questions in a medium other than an article or monograph.

Like Stephens and Rosales, Timnet Gedar came to see the production of her podcast in terms of its “real world” implications. Her episode, slated for a fall 2020 release, reveals the ethical inconsistencies of the reopening of Rome’s Il Museo Coloniale, a museum that houses relics of Italy’s colonial past in Africa. This effort heightens, Gedar asserts, the complexity of housing stolen African artifacts while so many people from Italy’s former colonies are turned away, either at their southern shore or en route over the Mediterranean Sea. For Gedar, a public engagement project like Reverb Effect requires “a certain type of accountability, rigor, and weight that is not necessarily present in traditional academic scholarship.” She said, “It opens my work up to people for whom my historical research has real-life implications and thus requires a careful narration that honors and lives up to those stakes.” In a public-facing project like the podcast, “any inaccuracy or misrepresentation has the potential to do moral and political damage.” Gedar felt an obligation, she said, to “not only produce work that is methodologically sound, but work that interrogates my own positionality, is attentive to a politics of care, and owns my intellectual responsibility to society.”

Reverb Effect provokes a heightened sense of responsibility precisely because it reaches a general audience. It might reach those at an increased risk for police surveillance and violence and those who often brush off the intrusion of street harassment. It could reach immigrants who suffer the dangers of crossing national borders. As Michigan’s History Department explores options to better translate scholarship, we must recognize the intimacies generated by public engagement projects.

Daniela Sheinin is a history PhD candidate at the University of Michigan. Her dissertation, Staging Neighborhood: Making Queens in the Construction of New York’s Last Great Park, examines the many phases of Flushing Meadows–Corona Park as the catalyst for neighborhood formation, and urban and cultural change in New York City.