To the public, 2018 was a tumultuous year in the US Department of State. The signal event there was President Donald Trump’s unceremonious firing of Secretary of State Rex Tillerson. But many scholars know that less visibly, the department employs quite a few historians, and the way the history of US foreign relations gets told depends on them being able to do their jobs. Yet 2018 was a rough year for them, too. 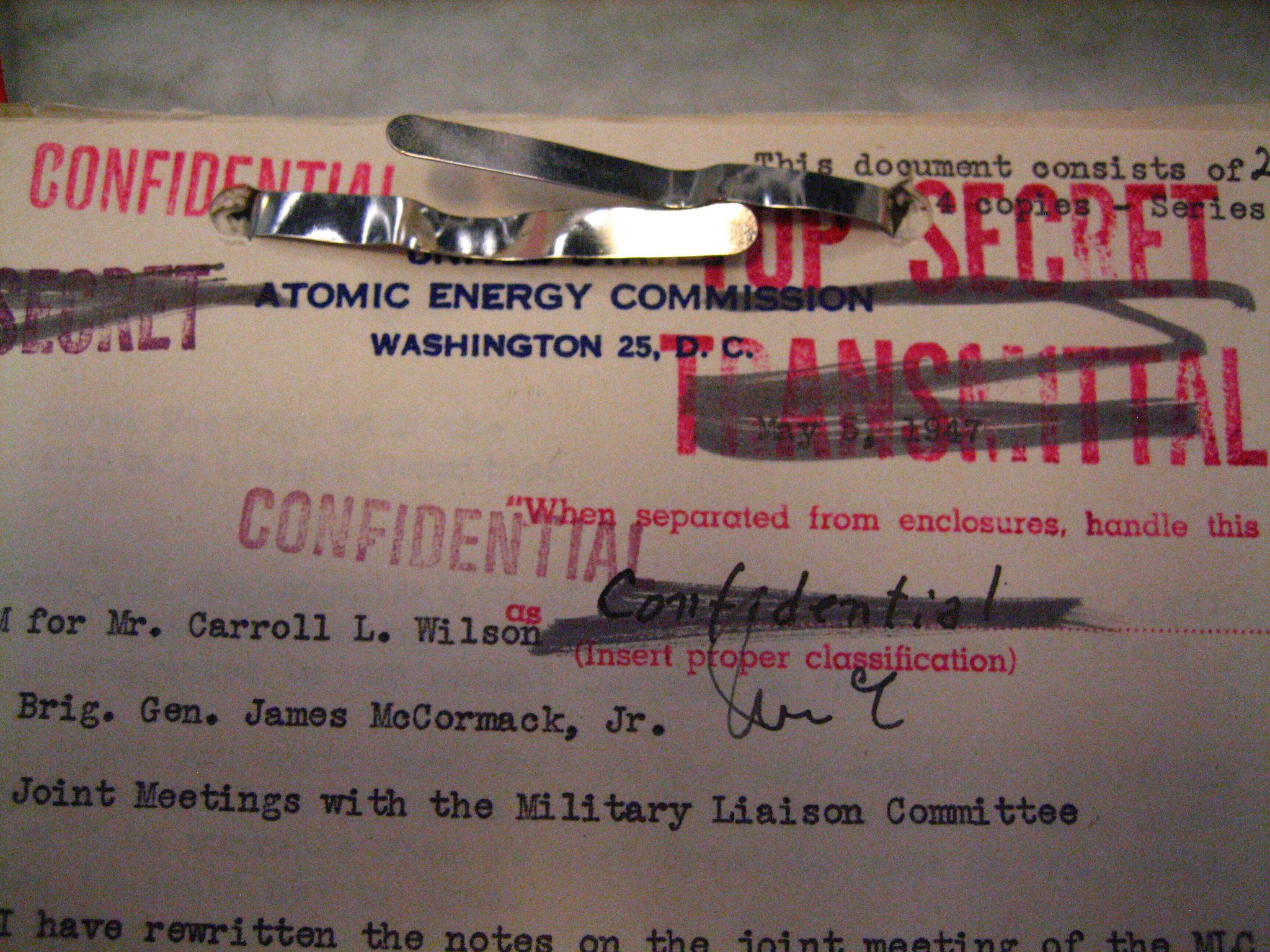 The problems the Office of the Historian faces are important because the job of declassifying documents is getting harder. RestrictedData/Flickr/CC BY-SA 2.0.

In a stinging annual report, the Advisory Committee on Historical Diplomatic Documentation (HAC) describes problems in the State Department in 2018. The HAC is responsible for monitoring two related functions of the department’s Office of the Historian: the declassification of historical foreign relations records and their subsequent publication. But according to the report, fallout from a political reshuffling of HAC personnel, delays by the Department of Defense, and other factors contributed to a frustrating slowdown that began in 2017. Similar to last year’s HAC report, the 2018 edition details significant roadblocks in the committee’s primary responsibilities. (The HAC is composed of several representatives from scholarly societies, including the AHA, and several at-large members.)

The problems the Office of the Historian faces are important because the job of declassifying documents is getting harder. Like university archives, the government is already deep into the era in which its “holdings” include electronic documents, such as email and audio and video files. But unlike universities, the government is required by law to review all of its classified documents and release them to the public, as long as they don’t contain intelligence sensitive enough to warrant further classified status. And there’s a deadline for this to happen. The Foreign Relations Authorization Act of 1991 mandates that review take place 30 years after any document’s creation. But according to the HAC report, all administrations from Reagan’s onward contributed to an “explosion” of classified foreign-relations documents. And because the review process pertains to documents about foreign relations created in all federal government entities, the Office of the Historian needs to hunt those down for review, too.

All this means that more and more time, money, expertise, and labor must be devoted to declassification. And, it seems to the HAC, no satisfactory way to review these records within the 30-year statutory time frame is on the horizon.

In December 2017, the HAC was dealt a blow when an extraordinary order came from State Department leadership: it denied the Office of the Historian’s request to renew the terms of three HAC members, and it asked the office to nominate potential replacements for all of the members. This surprise “unsettled” the HAC and the Office of the Historian, says the report, and “diverted the time and energy of both.” Compromises in the appointments structure were eventually reached. But by the time the State Department selected replacements for the vacated HAC seats, it was only a week before the committee’s August 2018 meeting. The new appointees hadn’t even received security clearances by the time the committee met for the last time that year, in December. Without a security clearance, it’s impossible to monitor the declassification process, as members of the HAC are legally required to do, or even to participate in discussions that refer to classified documents.

The HAC must also make sure declassified documents are published in the Foreign Relations of the United States series, better known as FRUS—an all-but-requisite first stop for most historians of US foreign relations, as it stretches back to the Lincoln administration. In 2018, the Office of the Historian published six FRUS volumes, a remarkable accomplishment, according to the report, given the difficulties that the HAC and the Office of the Historian faced. One of the volumes was the first of a planned three dealing with Afghanistan between 1977 and 1980—a certain boon to historians of the late Cold War. The Office of the Historian also aided scholars of the future by finishing the digitization process of all previously published FRUS volumes.

More and more time, money, expertise, and labor must be devoted to declassification.

But the HAC report also expresses committee members’ frustration with a slowdown in the production of FRUS volumes: the six in 2018 fell short of the average of eight over the previous several years. Even more worrisome, the report estimates that FRUS production will decline significantly to just two volumes in 2019. Given that the HAC is already having problems meeting the 30-year requirement, this will amount to a problem complying with the foreign relations statute, given that the Office of the Historian estimates that publishing eight to ten volumes per year will be necessary to satisfy the law. That first volume on Afghanistan, for example, might be the only one published for the foreseeable future, contrary to both the law and to the Office of the Historian’s public mission.

The experts at the Office of the Historian who compile FRUS might also face difficulties as classified documents from the country’s presidential libraries are all moved to a branch of the National Records and Archives Administration (NARA) located in a remote facility in College Park, Maryland, known as NARA II. Centralizing records is supposed to aid in declassification, but the HAC worries that many reviewers with expertise on a particular president won’t relocate to the Washington, DC, area. And that expertise, built up through years of experience, won’t simply materialize with the move.

What’s more, declassifying foreign-relations documents isn’t solely the concern of the State Department. Often multiple government entities have what’s known as an “equity” in a document—some kind of stake in its contents, which gives them a say in its declassification. Foreign relations documents don’t necessarily originate in the State Department, either; the Office of the Historian has to track them down across the federal government, and the HAC monitors this process.

This means that there can be multiple levels of approval required before a document is able to be declassified, with or without redactions. Additionally, government entities have their own declassification work to do: there are “mandatory declassification reviews” for their own documents, as well as Freedom of Information Act (FOIA) requests to comply with. Under a shorter timeline by law, these reviews typically take precedence over HAC requests.

Nonetheless, this year’s HAC report, like last year’s, commends some agencies’ efforts. It singles out for “plaudits” the reviewers at the National Security Council, and it praises those at the Department of Energy, who work under significant legal “burdens” (such as “ambiguous guidelines”) in declassifying nuclear-related records. The CIA, too, has recovered from “stumbles” in previous years, devoting more resources to an office dedicated to document review. One “joint historian” from the Office of the Historian is attached to this office, working intimately with CIA reviewers and others, though not reviewing any classified CIA documents themselves.

But the HAC report is withering in its critique of the Department of Defense, which “performed so negligently and so egregiously violated” legal mandates in 2018 “that it more than offset the commendable efforts of other agencies and departments.” The Defense Department was the major culprit for the slowdown in production of the FRUS series, declining in many instances to respond to HAC requests for document review within the time limits mandated by statute, and even categorically denying declassification of hundreds of documents that the Office of the Historian had cleared—“an unprecedented number that reflected an inadequate understanding of the declassification guidelines.” Although the Defense Department has lately picked up the pace, “it has made no progress” with the redaction process, which would allow the HAC to “certify” that FRUS is “thorough, accurate, and reliable” in time to satisfy the 30-year requirement. What might help, the report says, is an arrangement with the Defense Department similar to what the Office of the Historian has with the CIA.

The report expresses committee members’ frustration with a slowdown in the production of FRUS volumes.

Another model of cooperation between agencies is the National Declassification Center, an entity within NARA that works with the State Department. Earning the HAC’s “congratulations,” the NDC helped NARA reduce its backlog of work significantly in 2018 by “process[ing] hundreds of thousands of pages.”

Here again, however, the HAC report points out that despite the best of intentions and the NDC’s admirable pace of work, the prospects for the reviewing and transferring of classified documents from the State Department to NARA is worrisome. “The HAC is not sanguine about the capacity” of the relevant government agencies “to manage records in the electronic age that is now upon us.” The year 2018, reported an office within the State Department, was “the tipping point when the dominance of paper records passed to electronic records.” The HAC looks warily to the future, not only because there aren’t enough reviewers to keep up with the explosion of documents, but also because the technologies for records management that the HAC has considered (like artificial intelligence) are problematic.

Given all this, what does the HAC think should happen? Besides encouraging the Defense Department to set up an office that can work with the Office of the Historian on FRUS in a timely manner, the report recommends that NARA work with the relevant office in the State Department to strategize transparently about how best to use evolving technology in records management. Finally, the HAC report says that NARA needs to be more open in its plans for “consolidating all classified documents” from presidential libraries at NARA II.

The implications of the declassification work performed at the Office of the Historian, under the advisory oversight of the HAC, are substantial, and not just for historians who consult FRUS. Transparency is essential for a functioning democracy. FOIA requests are only the best-known way that classified documents become available to the public. The foreign relations statute ensures that historians, as represented by the HAC and the many credentialed professionals at the Office of the Historian, have a say in the declassification process, and in upholding the higher principle behind keeping that process ongoing and vigorous.

The HAC’s 2018 report can be found in its entirety here.

Allison Miller is editor of Perspectives. She tweets @Cliopticon.