“Here’s a scenario,” I said to students in my course on the Holocaust. “Imagine that right now, the North Carolina state government issues an order that you must leave the state if you or your parents are not from here. How many of you are from North Carolina?” Most students in the class raised their hands. Then, I asked, “How many of you have parents from North Carolina?” Fewer students raised their hands. I then followed up with questions such as: Where would they go? How would they get money to leave? Did they want to leave? Several students expressed discomfort with the idea of leaving because they identified as North Carolinians and did not know where they would find the funds or connections to start all over. 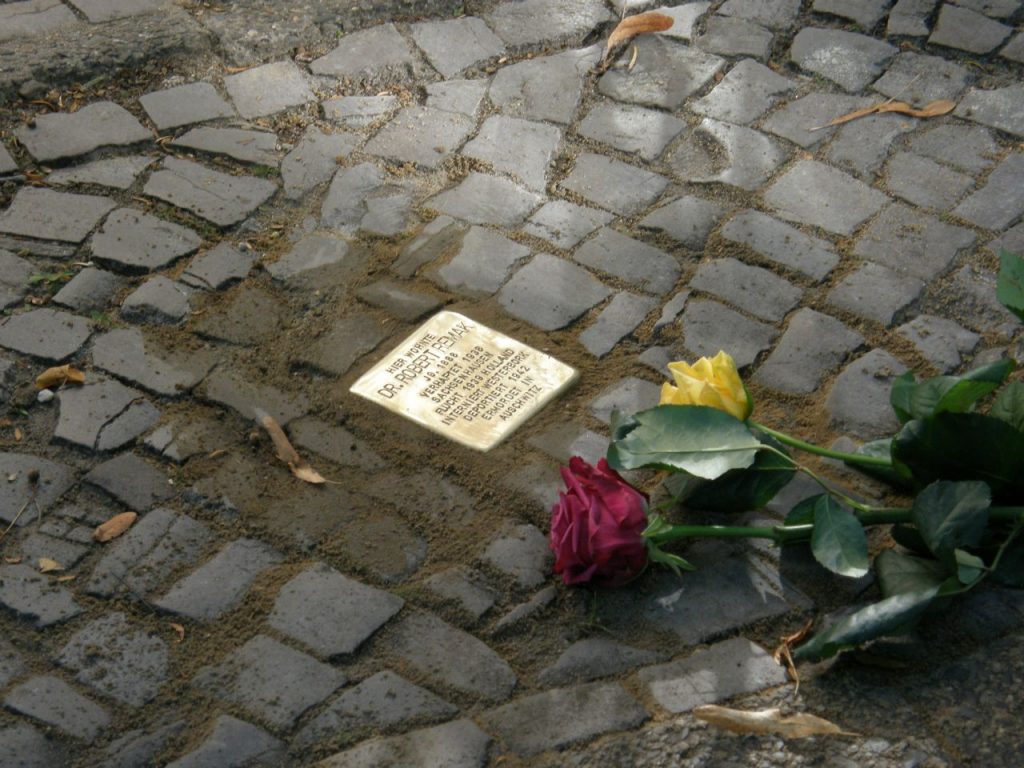 In a panel on “Interactive Approaches to Teaching Twentieth-Century Germany Harrison,” Scott Harrison will demonstrate how he encourages students to contrast the relationship between monuments, like the Stolpersteine, and memory in Germany and the US. Wikimedia Commons/Axel Mauruszat/CC BY 2.0 DE

I then asked the class to use this sense of unease to reflect on the readings—excerpts from German-Jewish diarist Victor Klemperer. At the end of a lively discussion about factors that informed Jews’ decisions to stay or leave in the mid- to late 1930s, one of my students responded, “I didn’t really get why he didn’t leave Germany. But now I get it.” The reflection affirmed to me that my approach had worked. (This anecdote comes from Alexandria Ruble, when she taught The History of the Holocaust at the University of North Carolina at Chapel Hill in spring 2015.)

“Interactive Approaches to Teaching Twentieth-Century German History” is a demonstration-based panel at the AHA annual meeting that focuses on effective pedagogical techniques for teaching undergraduate students to engage with and analyze primary sources. Concerned with the experiential, each panelist will model strategies from their own undergraduate courses and incorporate audience members into their presentations. The intention is to create a highly interactive session that fosters a two-way flow of knowledge. The session ultimately seeks to bolster students’ freedom and develop their abilities to think critically so that they may assess how and why the past affects society today.

The panel presenters—Julia E. Ault (Univ. of Utah), Adam A. Blackler (Black Hill State Univ.), Jane Freeland (Univ. of Sheffield), Scott Harrison (doctoral candidate, Univ. of Illinois at Urbana-Champaign), and Alexandria Ruble (Kennesaw State Univ.)—will teach on a wide range of topics and methods, including technology in and outside of the classroom, comparative cultures of memory, the Holocaust, new and postcolonial approaches to German colonialism in southern Africa, and the representation of domestic abuse in 20th-century German history.

Julie Ault, for example, will present on how teachers can use podcasts—a medium that is both popular and rigorous—in the classroom. This semester, her students are producing their own podcasts (15–20 minutes in length) based on the BBC series History of the World in 100 Objects. They are researching a topic of their choosing and developing arguments and scripts, before ultimately recording and sharing with the class. One student is currently exploring the power and limitations of American propaganda through Radio Free Europe. When the final product is complete, students will listen to classmates’ podcasts, interrogate arguments about the past, and evaluate the effectiveness of different podcasting methodologies.

Adam Blackler and Jane Freeland will both demonstrate how they involve students in the historical research process. Blackler, for example, exposes the other side of imperial domination to his students by drawing on two rich bodies of materials—documents from the Foreign Office in Berlin, including missionary accounts, newspapers, and political decrees, and African sources, namely the personal writings of Namaqua and Herero peoples. In working with these sources, students learn how Africans confronted German rule and the degree to which colonial encounters altered and shaped German identity in the metropole.

Similarly, Freeland’s demonstration will use material drawn from the FFBIZ, a feminist information center and archive in Berlin, and the East German newspaper, Berliner Zeitung, to examine the way battered women were presented in the East and West German media in the 1970s and 1980s. Students in her class explore questions such as: What assumptions were made about women and children living with violence? Why did feminist approaches to domestic abuse produce such anxiety? How was family violence understood under socialism?

Often, students recognize the importance of studying the Holocaust, but are hesitant to assess or critically engage primary sources on the subject. Some are fearful of tarnishing victims’ and survivors’ memories, while others argue that it is an event “beyond history.” At the session, Alexandria Ruble will explore the utility of employing role-playing and simulation exercises based on primary source analysis that can successfully engage students with difficult topics such as Jewish emigration prior to 1939 and life in the ghettos. Such an approach can help students develop the critical skill of placing themselves in historical actors’ shoes and determining how and why they made difficult decisions in times of extreme crisis.

Holocaust history can also push students to acknowledge their role as “active citizens” who can use history as a tool to shape a more equitable American future. In his teaching demo, Scott Harrison will show how students can use German memory culture as a springboard to consider the reality that America has yet to honestly grapple with its own history of racial violence. Students will compare and contrast German monuments to the victims of the Holocaust (in particular, the “stumbling stones”—Stolpersteine—found in German cities) with the monuments to Confederate generals that dot the American landscape to ask questions on how historical monuments serve as “orienting devices” that both shape the ways we interpret history and come to terms with the past, and what role Civil War monuments play in perpetuating structural inequality in contemporary American life.

One of the overall goals of this panel is to provide instructors with innovative pedagogical methods with which to guide undergraduate students toward becoming active interpreters of history. In other words, the panelists eschew the “sage on the stage” (lecture-driven) pedagogical model in favor of student-centered approaches. As panelist Jane Freeland notes, we aim to allow students to “peek behind the curtain”—to see how it is that one “does” history—and thereby encourage students to recognize that they, too, are historians.

The AHA is committed to making resources available to educators at all levels and at every stage of their careers. Please visit our guide to Teaching and Learning at AHA18 for a complete listing of teaching events at the annual meeting in Washington, DC.