With every passing day, the AHA’s upcoming annual meeting on the theme of Race, Ethnicity, and Nationalism in Global Perspective is becoming more and more urgent. In particular, a group of sessions on The Modern Legacy of Premodern Racial and Ethnic Concepts anticipates a number of recent events and controversies that have drawn attention to the close links between white supremacism and medievalism: that is, the projection of modern agendas onto the medieval past, or the selective use of that past to further such agendas. These include the mobilization of “medieval” symbolism by members of the “alt-right” and neo-Nazi groups, most notably by those rallying in Charlottesville; the renewal of white nationalist ideologies based on long-discredited versions of ancient and medieval history; and an ongoing, painful debate within academe over the extent of white supremacism’s (latent or blatant) influence in the shaping of various disciplines, including medieval studies. 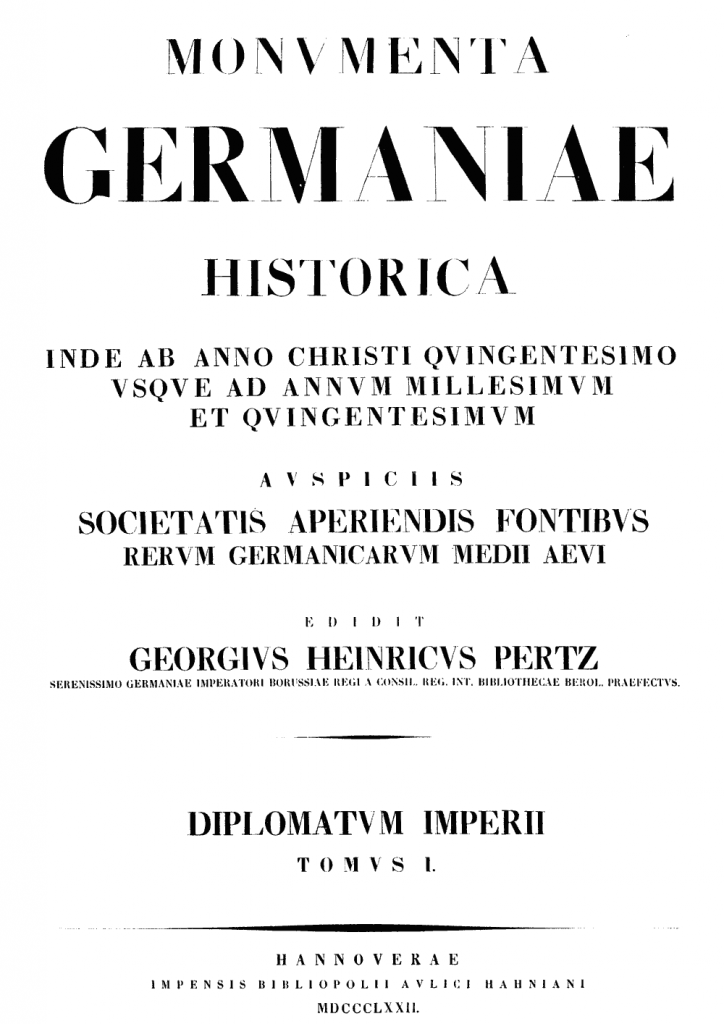 Carol Symes describes the Monumenta Germaniae Historica as a 19th century attempt to create a nationalist narrative of Germany.

When I organized this multi-session workshop with Michael Kulikowski (Penn State Univ.) back in January, we could not have foreseen some of these specific developments; but as historians of ancient Rome and medieval Europe we were already deeply sensitized to the misrepresentation of our fields and grimly awaited the escalation of these abuses after the 2016 presidential election. As in the 19th and early 20th centuries, nationalist and racist discourses are now being fueled by a toxic nostalgia for nonexistent eras of ethnic homogeneity. Fears that “innate” European or “Western” identities are being threatened by immigration are heavily indebted to false narratives of some preternatural ethnic purity rooted in medieval European soil; anti-immigrant rhetoric evokes the “barbarian invasions” of a Roman Empire depicted as ludicrously monochromatic. We therefore wanted to ensure that the modern categories of race, ethnicity, and nationalism would be placed within a deeper historical context. We also wanted to showcase recent scholarship on the ways that ethnic differences were described and experienced in the premodern world, and to address current historical and scientific methods that are being used to identify and differentiate among peoples of the past. Above all, we wanted to warn against the potential misuses of this research in new pseudo-scientific racist discourses.

Like all periodizing categories and labels, “the Classical Age” and “the Middle Ages” are constructs of modernity. The informed study of “what happened” during those eras (variously defined) is therefore inextricable from the ongoing interrogation of when, how, and why these categories were invented. In fact, “medieval” Europe was co-created in tandem with white supremacism, the “scientific” racialization of slavery, and modern European imperialism. Moreover, previous generations of medievalists, often working in the service of these modern projects, have not only shaped the terms of our engagement with historical sources, their work has shaped the sources we have. The medieval archive has been (and continues to be) selected, edited, translated, censored, packaged, and destroyed by forces beyond the control of the people who generated the components of that archive. There is no way to do medieval history responsibly without engaging its modern and postmodern entanglements.

Scholars in the various disciplines that make up medieval studies are now struggling to address these entanglements in response to immediate pressures, while seeking to understand the far-reaching effects of racism within these disciplines. Recently, Medievalists of Color published an open letter calling on colleagues to acknowledge systemic racism’s role “in our field’s constitution and practices; to educate themselves in the critical discourses that address systemic racism both explicit and implicit; and in doing so to move past preoccupations with individual intentions.” This has become even more crucial in the wake of Charlottesville, as the Medieval Academy of America and many other academic organizations have underscored. It is imperative that scholars of the premodern past seriously consider the ethical and intellectual stakes of engaging (or neglecting to engage) these issues.

Specifically, historians of the Middle Ages need to take more responsibility for contextualizing recent incidents and critiquing long-standing trends within our discipline. That work has usually been done by scholars in other fields, especially in English and comparative literature departments: scholars more conversant with critical race theory and the study of medievalism and more willing to apply theoretical categories in their research. To date, the only tenured historian of medieval Europe to have found an audience for her views on these issues is Rachel Fulton Brown (Univ. of Chicago), a columnist for Breitbart who has used her privileged position and powerful allies to deride, bully, and persecute a junior, untenured medievalist of color. In a blog post published in mid-September, and in subsequent interviews, she has explicitly justified these attacks by invoking her authority as a historian (PhD, Columbia 1994). “If you teach the history,” Fulton Brown told Inside Higher Ed, “everybody basically learns that it’s a very complicated story, and there’s nothing to support the white supremacist argument in it.” According to her, proving that “you are not a white supremacist” simply means showing that you can find some black people in medieval Europe: an essentialist exercise tantamount to noting the existence of medieval women without any critical analysis of pervasive misogyny and the workings of gender and power.

“The history” that Fulton Brown professes to teach (which “everybody basically learns,” as though by osmosis) is “medieval western European Christian history, including the history of our field.” In other words, it is a fictive, hermetically sealed, and fiercely policed “western European Christian” space. It is not the history of a multiethnic, culturally diverse, religiously pluralistic, interconnected medieval world. Nor does it include the story of how that world was narrowed down by “western European Christian” historians. In a subsequent statement cited by the Chronicle of Higher Education, Fulton Brown again insisted that “medieval white supremacy [. . .] is not a narrative that makes any sense if you know anything about our field.”

This is a flagrant and easily demonstrable falsehood. The task of the medievalist, from the earliest days of history’s institutionalization as a modern academic discipline, was to construct the nationalist narratives that bolstered the claims to territory, patrimony, and sovereignty on which 19th-century European states and aspiring states depended. The most obvious example is the Monumenta Germaniae Historica, founded in 1826 to catalogue all “monuments of German history” in advance of a unified German imperial state: that is, texts and artifacts produced by any people that could be considered “Germanic” (those of Anglo-Saxon England and Visigothic Spain, for example) or in any region open to German territorial aspirations (Poland and the Low Countries, for example). In the 20th century, the eminent medieval historian Charles Homer Haskins helped to devise the intellectual framework for the WWI doctrine of national self-determination on the basis of such claims. His star pupil, Joseph Strayer, helped to advance the cause of “Western” (white) supremacy during the Cold War. Strayer’s own students went on to populate the history departments of many prestigious American universities. (I myself am heir to this legacy.)

What were the ethnic identities of the people we call “medieval”? Did they have a concept of race? Would they welcome the adulation of white supremacists? Or would they justifiably protest against the violent misappropriation of their own complex histories and perspectives? For “medieval” people, too, have been cast as unknowable Others subsumed under a made-up modern category—and through the very same processes that gave us modern racism. I hope that many of you will join us in January for our sessions at the AHA, where we will address such critically important issues, their implications for the past, their bearing on the present, and their implementation in future historical research.

Carol Symes, associate professor of history at the University of Illinois, Urbana-Champaign, is the founding executive editor of The Medieval Globe, the first journal devoted to a globalized study of the medieval past. Her first book, A Common Stage: Theatre and Public Life in Medieval Arras (Cornell Univ. Press, 2007) won the AHA’s Herbert Baxter Adams Prize. Her current project “Mediated Texts and Their Makers in Medieval Europe,” has received support from the National Endowment for the Humanities.

Attend sessions on The Modern Legacy of Premodern Racial and Ethnic Concepts at the 2018 AHA annual meeting. Part 1, Ethnic in Imperial and National Discourses, Then and Now, will be held on Friday, January 5, from 8:30 to 10:00 a.m. The session will be followed by part 2, Deciphering Racial Markers, Medieval to Modern (from 10:30 a.m. to 12:00 p.m.), and part 3, Racial Sciences, Old and New (from 1:30 to 3:00 p.m.). All sessions will take place in room Columbia 7 at the Washington Hilton, Terrace Level.