America’s Front Yard: The National Mall through the Years

Even before its use as a hashtag during the most recent presidential campaign, the phrase “drain the swamp” had a much more literal meaning to the residents of the District of Columbia. DC’s origins date back to 1791 when Congress approved purchase of land for a federally controlled capital. The district initially encompassed 100 square miles—most of which was covered by thick forests and insect-infested bogs. Upon arriving in 1800, Abigail Adams described DC as “a city only in name” in a letter to her sister. The land surrounding the newly completed White House was “romantic but a wild, a wilderness at present,” according to the First Lady. 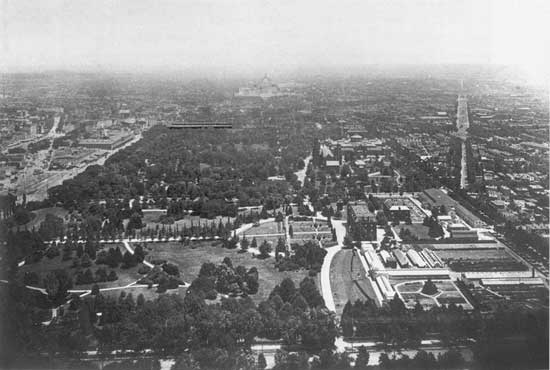 The National Mall in the summer of 1901. Wikimedia Commons

The capital today, of course, is a different place and no area in DC has undergone more physical and symbolic change than what is known affectionately as “America’s Front Yard”—the National Mall. As its wilderness was beaten back, the Mall’s function changed dramatically as well.

Part of his original design for the city of Washington, Pierre L’Enfant envisioned the National Mall as a “grand avenue” that would stretch from the Capitol building to the Potomac River, resembling the great streets of European cities. In its early days, the space was referred to as the “public grounds” or simply “the mall,” a common term for public parks at the time. One of the earliest developments on the Mall was the construction of the Washington Canal, part of L’Enfant’s vision to have a series of canals running through the city to ease commerce. The canal, which opened in 1815, connected the Potomac to the Tiber Creek and the Anacostia River and soon came to be despised by Washingtonians—it required consistent dredging to remain operational.

Both DC and the Mall experienced several turbulent events in the early 19th century. British troops marched on Washington in 1814, burning the White House and Capitol building. DC also experienced its first race riot—the Snow Riot—in 1835 when disgruntled white residents and slaveholders brutally attacked freedmen and their property across the city. Following the riots, DC quickly enacted legal restrictions on free blacks. Visible signs of oppression were scattered across the Mall itself—holding pens and auction blocks for enslaved people remained common on and around the Mall’s land until the abolition of slavery in DC in 1862.

As the 19th century wore on, the Mall had something of an identity crisis. It was part industrial center and part public park that served as a gathering place for citizens. In 1848, the cornerstone of the Washington Monument was laid, and two years later, Congress set in place a partially realized plan to turn the Mall into a Victorian-style park, complete with winding paths set amongst woods. The Smithsonian Castle, DC’s first museum, was completed in 1855. In 1865, just three months after Lee’s surrender at Appomattox, the Washington Nationals Baseball Club (no relation to the current team) hosted a tournament on a lawn that would become the White House Ellipse. Tickets cost $1 and thousands of spectators watched the games from temporary stands. Railroads and horse-drawn streetcars also started cutting across the Mall during this time, bringing manure, smoke, and the ire of some district residents with them. Millions of passengers used the segregated streetcar system during the Civil War. The Mall was becoming a busier, grittier place.

In the late 19th century, city officials finally decided to do something about the Washington Canal, which an 1871 edition of the Evening Star appropriately called a “ditch and common sewer.” A portion of the canal, the paper noted, “is in a high state of nauseous fermentation” two-thirds of the year, with “bubbles continually ooz[ing] up during those months through a thick coating of green scum.” The portion adjacent to Maryland Avenue, only several hundred yards from the Capitol building, continued the paper, was blanketed by a “dense growth of wild oats and rank weeds, the lurking place of hybrid ducks, polly-wogs, and mosquitoes.” City officials filled in the canal to form B Street, which later became Constitution Avenue. As the Mall began looking more civilized, an array of leisure activities flourished on its grounds. In 1878, President Rutherford B. Hayes held the first White House Easter Egg Roll on the Ellipse. In 1887, the Smithsonian acquired several critically endangered American bison, allowing them to roam in a small paddock on the Mall. This paddock was the precursor to the National Zoo.

In the last two decades of 1800s, the Mall would also become a ground for protest that it is now famous for. The same year that the bison arrived, militias from over a dozen states as well as DC camped around the newly completed Washington Monument to participate in marching and shooting competitions. Trouble arose when, for the first time, black companies were scheduled to compete directly against white ones. Two southern companies refused to take part in a parade. It was yet another incident in DC’s troubled history with racism—nearly three decades later, 25,000 Ku Klux Klansmen would infamously march down Pennsylvania Avenue in another show of white supremacy.

The National Mall witnessed its first organized protest in 1894. That year, groups of disgruntled job seekers—“Coxey’s Army”—organized across the country and traveled towards Washington to march. Some 1,500 soldiers were dispatched to meet the protesters. Other organized protests soon followed. A significant Progressive Era protest occurred in 1913 when over 5,000 suffragists marched down Pennsylvania Avenue from the Capitol to the Treasury Building to support women’s rights. Male onlookers heckled and harassed the marchers, and soldiers once again had to be called in.

By the 20th century, the Mall had embraced its function as part-museum, part-marching ground. In 1902 Congress released the McMillan Plan for the redevelopment of the Mall. Wooded Victorian parks around the Mall were scrubbed in favor of long grassy lawns, and West and East Potomac Parks were created out of reclaimed swamp land. The Lincoln Memorial was dedicated in 1922 on a spot that was once nothing but mudflats and the Tidal Basin was formed close by to help prevent flooding and was opened to the public for recreation and swimming in 1918. The Tidal Basin’s beaches were segregated, and closed in 1925. The basin’s famous cherry blossom trees were planted in 1912, a gift of friendship from the mayor of Tokyo.

Monuments and museums continued to pop up over the next one hundred years, but by the 1920s the Mall had more or less taken its modern shape. Still, the legacy of DC’s watery past remains. In the past few years, the Army Corps of Engineers has set about building a series of levees on the Mall to combat potential floods. The Washington Canal lockkeeper’s house is still present at 17th and Constitution Avenue, and plans are underway to restore it to its 19th century appearance. The Mall has born witness to a war, auctions of enslaved people, baseball games, and bison. America’s front lawn is truly a microcosm of the nation’s history. As new marches, inaugurations, monuments, and museums come every year, it is sure to remain that way for generations to come. The humidity and mosquitoes aren’t going anywhere either.

Ethan Ehrenhaft is a Washington, DC, native and former AHA intern. He is currently enrolled as a sophomore at Davidson College in North Carolina and plans on majoring in history. At Davidson, Ethan is senior staff writer for The Davidsonian, the college’s student-run newspaper.