Understanding the Present: The Impact of World War I in the Middle East

Watching the ongoing refugee crisis in the Middle East and Europe, I cannot but recall the suffering of Middle Eastern people at another time of great upheaval: during the First World War and following its settlement. 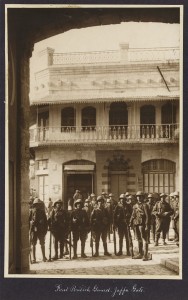 The title of my book, A Land of Aching Hearts: The Middle East in the Great War (Harvard University Press, 2014), which I spoke on recently at the Washington History Seminar, comes from a line in the journal of a Turkish feminist, Halidé Edib. In an episode about her travels by train through villages from Anatolia to Homs during the Great War, she remarked on a haunting sense of misery. In the villages, not a man was to be seen because so many had died or been conscripted. Locusts had devoured fields. Famine shadowed families and took many lives. She wrote, “I have seen, I have gone through, a land full of aching hearts and torturing remembrances” (1). As the memory of the war evolved decades later, people began to describe it as a great war of suffering—the safarbarlik, or mobilization—in which barefoot soldiers crossed cities, deserts, whole regions away from their homes, and millions of civilians faced starvation, disease, relocation, and levels of misery so profound and so lasting that their memory was passed on from one generation to the other. 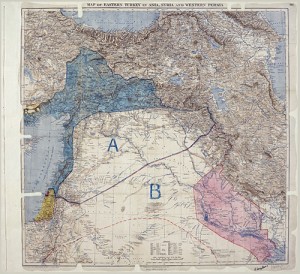 The conclusion of the war introduced additional political upheaval to the region. In the West the war solidified already formed national identities. But in the East it shattered the imperial Ottoman system that, for all its faults, let a multiplicity of identities coexist for much of the time. The Sykes-Picot Agreement, drawn during the war in 1916, divided the region into spheres of influence between the British and the French: roughly, Palestine, Jordan, and Iraq were designated British while Lebanon and Syria were assigned to the French, should the Allies win the war. No representatives of these regions were privy to the agreement. It was negotiated in secret and contrary to the principles of self-determination that would become a centerpiece of Woodrow Wilson’s “14 Points” plan for world peace at the end of the war. The French Mandate that replaced the Ottomans in 1923 introduced a new foreign rule to the Lebanese and Syrian people, who once again had no say in their government. The region was thus entrapped in new structures of imperial governance, and the foundations were laid for enduring mutual suspicion.

When the Islamic State bulldozed the berm between Iraq and Syria in June 2014, it publicized the event as the destruction of the Sykes-Picot border. The reference is indicative of the level of lingering resentment towards the West’s unilateral redrawing of borders 100 years ago. Why are old agreements from a century ago at the center of heated debates in the Middle East? The answer is that the suffering the region endured during the Great War lives on in the memory of its people, and decisions made then continue to affect relations among Middle Eastern peoples to this day.

The current refugee crisis is an opportunity to reflect back 100 years ago to the mistakes made following the Great War that caused—and continue to trigger—so much suffering and conflict. This is why the study of history is invaluable to understanding the present. Like memory, history’s influence is not fleeting but longstanding. We must account for it as we move forward. 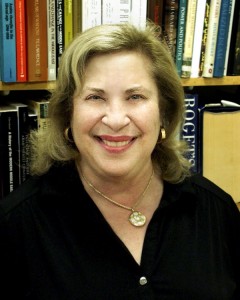 Leila Fawaz is the Issam M. Fares Professor of Lebanese and Eastern Mediterranean Studies at Tufts University. Fawaz received her PhD in history from Harvard University. She is currently researching the changing nature of collective memory and the evolving legacy of World War I in Lebanon and Syria. In 2012 Fawaz was awarded the title of Chevalier in the French National Order of the Legion of Honor.