The Stonewall Riot, Rebellion, or Uprising occurred over three nights late in June 1969 following a police raid on what was one of New York City’s most popular gay bars.

A spurt of LGBT organizing quickly followed. Stonewall quickly became heralded as a turning point of the LGBT movement, the “hairpin drop heard ’round the world,” as the New York Mattachine Newsletter called it. “Before Stonewall” and “After Stonewall” have become as significant markers of queer time as the birth of Christ for the history of the West. The name “Stonewall” has since been appended to organizations, events, and even museums dedicated to LGBT rights around the United States and even across the world. In his second inaugural address, President Obama listed Stonewall aside Selma and Seneca Falls, incorporating LGBT rights into the liturgy of equality and activism that defines the civic religion of American liberalism. 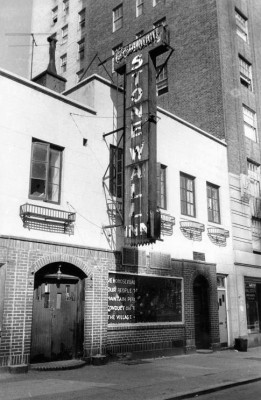 Like any modern American legend, it has also spawned feature-length films: most recently the Roland Emmerich–directed flop that exited theaters within a week of opening—of which my colleague Timothy Stewart-Winter has an excellent review—but also Nigel Finch’s hard-to-find and campy gem of an independent film released in 1995 and a 2010 documentary shown on the American Experience series on PBS.

With little hard evidence and numerous firsthand accounts—many of which contradict one another—the messy events at Stonewall and the myths it generated have become a matter of intense debate among historians and other scholars of the past.

One of the hardest-to-dispel beliefs about Stonewall is that police targeted the patrons of the bar. In actuality, patrons were just collateral damage. Thanks to the Mattachine Society’s Sip-in at Julius’, gay bars were virtually decriminalized in 1966. However, the Stonewall Inn was targeted by a special squad from downtown, not the local precinct, because it was a notorious money-laundering operation for Mafia affiliates; the proprietors engaged in a laundry list of criminal activities: extortion, bootlegging, and drug peddling. Subject to discriminatory regulation by the State Liquor Authority, harassment by the police, and the constant presence of homophobic and transphobic violence, many LGBT people sought sanctuary in bars that, like the Stonewall, were either directly owned or indebted to organized crime, which managed the ever-present rhythm of bar raids with bribes and political influence.

Moreover, while the Stonewall Inn’s customers and especially contemporary gay activists were predominantly white, the real uprising began when patrons were joined by a coterie of mostly young and poor “street queens,” many of whom were people of color and gender nonconforming. When they realized a raid was on, they fought back, eventually locking the officers in the bar. The officers called for backup but the spark had ignited. According to most eyewitnesses, a butch, biracial performer, later identified as Stormé DeLarverie, struggled with cops as she was arrested, and implored the crowd to fight back, which is what happened over the next 48 hours.

The Stonewall legend continues to grow, and as it has, its history is sometimes whitewashed, its more flamboyant actors shunted into a narrative of militant respectability, which now characterizes much activism in the Windsor and Obergefell eras. The further we get from the events of Stonewall, the more we stand to lose our grasp on the historical roots of the modern LGBT movement and, perhaps more tragically, the chronic homelessness, violence, police harassment, and racism that persist well into the 21st century.

That’s why the swift criticism of Emmerich’s Stonewall by members of the community, including historians, was so encouraging, as was its financial failure, counterintuitive though that may sound. The film emphasized a fictional white, gender-conforming protagonist, and its chiseled actors, exaggerated characters, and unlikely plotline seemed like the product of an extended focus group at a fraternity house. The fact that both scholars and LGBT/queer community members so rigorously exploded Emmerich’s whitewashed myths means that we are taking seriously our past and the way it has shaped our present. Ironically, even though it’s likely the movie got made due in part to Stonewall’s legendary status, the community’s criticism of the film means we are no longer content with deracinated, depoliticized, and whitewashed narratives of respectability.

Historians have a real opportunity to bridge academic and public awareness of Stonewall’s significance. Public demand for an accessible, unvarnished history of the LGBT/queer movement is outpacing our ability to produce it. The most recent example of this is Lillian Faderman’s widely reviewed The Gay Revolution: The Story of the Struggle, an extensively researched and marvelously detailed account of this country’s LGBT/queer movement in the last seven decades. The Gay Revolution reads like a survey for a queer history course, an excellent primer on LGBT/queer history in the United States. And although the Stonewall Riots are the pivot of her history, Faderman actually decenters Stonewall and New York City by detailing many lesser-known events from the country’s LGBT/queer past. She also details the importance of the Homophile movement, whose more staid activism has often been misread as simple respectability politics through the ahistorical lens of post-Stonewall radicalism.

Even so, the book cannot quite escape legendary or ideological short circuits. Faderman frames her preface with a professor blackmail scandal at the University of Missouri in 1948 and ends with an account of the promotion ceremony of General Tammy Smith, the first high-ranking officer to come out after the repeal of Don’t Ask, Don’t Tell. While The Gay Revolution details antigay backlashes—especially Anita Bryant’s Save Our Children campaign and the homophobia and transphobia unleashed by the HIV/AIDS epidemic—it is ultimately a whiggish narrative. Trans* and gender-nonconforming people play a minimal role, and there is virtually no analysis of race or racism and class in the movement. This is all the more disappointing because of the work of LGBT/queer historians like Martin Duberman, Susan Stryker, Kevin Mumford, John D’Emilio, Elizabeth Kennedy and Madeline Davis, George Chauncey, Jesi Gan, and countless others who have pointed to the centrality of poor, nonwhite, and gender-nonconforming people to the Stonewall events and the movement. It’s not only the events of Stonewall that show that these were the people who were most likely to take on the heaviest risks: arrest, loss of employment and housing, social ostracism, and physical violence. Students and community members today ask us about these pioneers, and we’re missing an opportunity if we can’t tell them about them.

There’s another Stonewall narrative, as well. Writing two weeks after the event, a then-unknown Edmund White wrote that as Stonewall rebels battled cops and marched up the streets, “Dreary middle-class East Side queens stand around disapproving but fascinated, unable to go home, as though torn between their class loyalties, their desire to be respectable, and their longing for freedom.” Another, more cryptically and elliptically legendary telling describes the disgust of middle-class vacationers returning after a weekend vacationing on Fire Island. These queers complained about the misbehavior of the street rabble and fretted about their own fraught respectability. Whatever the truth of that legend, in the following decades it would be exactly this class that would capitalize on the dividends of Stonewall to demand the partnership benefits from American corporations that ultimately laid the groundwork for Obergefell. This is not to minimize the importance or hard work of this victory, but to raise questions about the class of people whose actions on June 28, 1969, helped lay the foundations for the modern movement, including Windsor and Obergefell.

Christopher Adam Mitchell is currently writing a book on New York City’s queer economic and cultural history from the 1940s to the 1970s. He teaches history and women’s and gender studies at Rutgers University-Newark, Hunter College, and Pace University.