On the Move: Atlanta's History, Told in Transportation

Though notorious for its congestion, Atlanta is a city built on transportation. Most visitors to the AHA annual meeting will arrive via Hartsfield-Jackson Atlanta International Airport, the busiest on the planet. If you take a car or shuttle, you'll reach the conference hotel via the massive swath of concrete known as the Downtown Connector, where Interstates 75 and 85 converge. The former, a legacy of the old Dixie Highway, links the Great Lakes and Florida. The latter connects Virginia with Alabama. Here, in the heart of a metropolis of nearly six million residents, these two national arteries cross—for seven and a half harrowing miles.

The wise alternative is to take MARTA, the 1970s-era rapid transit system whose north-south lines terminate at the airport. Much of the route to the city runs parallel to the railroad equivalent of the Downtown Connector. Lines ascending from Gulf and South Atlantic ports, operated by the giant eastern rail duopolists CSX and Norfolk Southern, briefly converge as they approach the Atlanta Wye, one of the most convoluted (and important) rail junctions in the United States.

Those rail lines date to the city's earliest days. Antebellum southern coastal merchants, eying connections with the booming Ohio River Valley, probed unsuccessfully for passages through the rugged, rambling Appalachians and Alleghenies. Prior to the mid-1850s, only the Western and Atlantic Railroad, following a route plotted by US army engineer Stephen Long, managed to achieve that objective. The state of Georgia built the W&A line, which came to provide the Confederacy with its only rail passage to the Northwest from the prosperous Southeast.

Having paid for the vital route, Georgia left the task of building connections from coastal cities largely in private hands. The southern lines would converge at a flat expanse of land below the Chattahoochee River. The first line to reach the spot, extending from Charleston via Augusta, designated the future site of Atlanta simply as Terminus. (The town's builder later bequeathed its less pedestrian moniker, presumably to evoke its opening of the interior to the Atlantic Ocean.) Having been shown the way, rivals responded with lines from Savannah, Brunswick, and Mobile. Meanwhile, railroads extended north from Chattanooga to Memphis, Nashville, and Louisville, and another line peeled up the Tennessee River toward Knoxville. 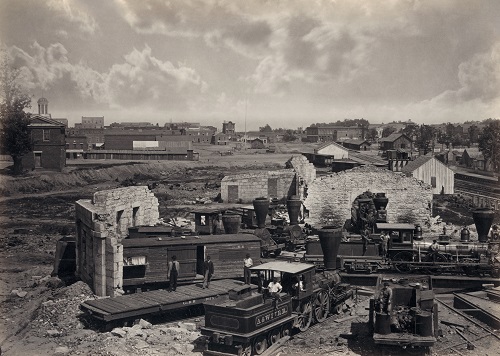 No one envisioned quite what would become of Terminus. Promoters had not set out to create a metropolis in northwestern Georgia. Atlanta developed as a vital hub served by multiple lines that competed for traffic and interchanged cargo. Merchants and financiers gathered to facilitate trade, and manufacturers established plants in the city to take advantage of these services. The process unfolded gradually, then exploded with the onset of the Civil War, as Atlanta became a vast staging area for the Confederate military effort. New lines from Virginia and the Carolinas fed those already leading to the city, and warehouses encompassed acres of land around the rail junctions below the Chattahoochee.

The lines proved equally vital to the Union war effort. The W&A railroad served as General Sherman's lifeline during his Atlanta campaign, and the Siege of Atlanta ended in September 1864, when Union soldiers severed the tracks ascending from Montgomery and Mobile, cutting the last of the feeder lines from southern coastal ports. Although Sherman (and his adversaries) might twist the iron rails and set fire to the structures, there was never any doubt the strategically located place would be built anew. The war had secured Atlanta's position as a central node in the country's commercial infrastructure; the emergence of a national economy characterized by large corporations doing business on a vast scale steadily reinforced this position as Atlanta entered the 20th century. One local firm, Coca-Cola, grew famous marketing and distributing its product far and wide, and many outside firms such as AT&T and Sears based their southern operations in the city. Today, you can walk the BeltLine Railroad and visit shops and restaurants in the old Sears warehouse, located just a couple of miles from the meeting hotels.

Life in Atlanta brings daily reminders of the centrality of transport to the region. Business pages carry stories about transport giants such as Delta, Norfolk Southern, and UPS, all headquartered here. Tens of thousands of residents awake each day and head to the airport, able to arrive anywhere in the United States for a 10:00 a.m. business meeting. And this spring, Democratic mayor Kasim Reed and Republican governor Nathan Deal secured federal funds for deepening the Port of Savannah, many of whose containers will pass through Atlanta via road or rail. Meanwhile, my fellow residents and I brace for ever more congestion, while waiting in vain for an expanded MARTA and searching forlornly for affordable housing in booming in-town neighborhoods. Enjoy them!

Steve Usselman is chair of the School of History and Sociology at the Georgia Institute of Technology and a member of the 2016 Local Arrangements Committee.