Muddling through the Iranian Revolution

Revolutions are epic events that shape both what comes after them and narratives of what came before them. The Iranian Revolution of 1979 is no exception. The postrevolutionary state in Iran has engaged in an extensive project of memory making through public commemorations and the production of written documents and oral histories. And individual figures of the revolutionary movement and of the ancien régime alike have been publishing their memoirs or recording their memories in oral history archives such as Harvard University's Iranian Oral History Project and the Berlin-based Research Association for Iranian Oral History.

As a result, there is a vast scholarship on the Iranian Revolution, published both inside and outside Iran, much of which focuses on the political, economic, social, and ideological reasons for the revolution. But what does the unfolding of a revolution feel like to those living through it? Do people's experiences of the revolution (inevitably remembered as fractured and muddled) line up with historians' later tidying up of the narrative, or do they deviate from it? Is it even possible to get at something as elusive as the experience of a revolution decades later? These questions have been at the core of my research in the 2014–15 academic year when, as a Mellon New Directions fellow, I set out to both train in ethnographic methods and conduct research on the experience of the 1979 revolution.

Capturing a revolution as it unfolded, rather than analyzing the reasons for it, necessitates interviewing a wide swath of people about the fabric of their everyday lives in the lead-up to the historic event. Many took part in the revolution for reasons that often are not included in archives and formal analyses, such as youthful idealism and rebellion against social norms, curiosity, or even love. For many, if they had ever told their stories, it was within intimate circles of friends, and rarely in a linear fashion. Unlike the polished and oft-told narratives of the revolution's leaders, these stories require time, patience, and sometimes persuasion to be elicited. One of the sentences I heard frequently from people I interviewed was "I'm not sure this is interesting to you." 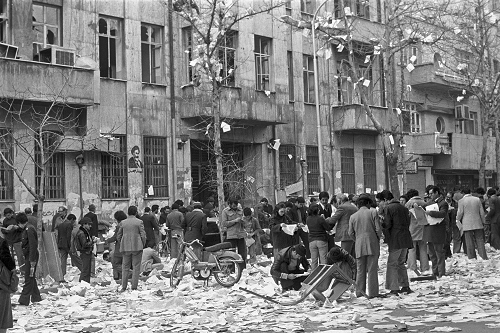 For reasons of access and security, I began my research focusing on the Iranian diaspora, which is more or less mapped along revolutionary affiliations. Each cluster knows of the others, but often clusters don't interact. To access the intimate space of networks among the revolutionary diaspora, I needed intermediaries to vouch for me. So in September 2014, I arrived in Paris, where many former leftists, religious-nationalists, Islamist-Marxists, and monarchists reside, and a friend introduced me to Mr. A., who was well known to the various communities. He told me to attend a cultural event, saying, "Everyone will be there." While I was there, I stood by him as he grabbed people he knew and asked, "Were you in Iran during the revolution?" If they answered yes, he would say, "Give her your phone number. She's writing a book on the revolution." Shockingly, all of them did. Thus, in my first week in Paris, I collected at least 20 phone numbers from people who had taken part in the revolution, two-thirds of whom agreed to talk to me; in turn they suggested others. This repeated itself, more or less, in other cities, including Washington, DC, and London.

As a historian, was I not merely conducting oral histories, to be used alongside written records? Oral history and ethnography share several crucial traits—such as accounting for the subjectivity of sources, the significance of the interplay of the researcher and her subjects to the information collected, the kinds of questions asked, and the focus on the meaning of events versus the event itself. Additionally, many oral histories contain ethnographic data, and ethnographic interviews are undoubtedly at times oral histories. Nonetheless, as I conducted more and more interviews, I recognized that the biggest obstacle to my project was the filtering of people's memories of the 1970s through their postrevolutionary experience of persecution (especially if they were from leftist or religious-nationalist groups), immigration, and even disappointment at what they themselves saw as youthful indiscretions. To push through the wall of postrevolutionary memory (and forgetting), ethnography provided a better path for three major reasons.

The first is the form of ethnographic interviews. My interviews are anonymous and semi-structured, and they often rely on the "grand tour" question that asks subjects to take me through a day; focusing on the material aspects of their story is a way of steering them away from a postrevolutionary analysis. Thus, I don't ask, "How did you feel on February 11, 1979?" I ask if they remember where they were that morning and if they could take me through it: did they turn on the radio, read a newspaper, visit a friend, go into the street? This makes the interviews more intimate, and triggering memory through specific people, places, and things, as opposed to asking their impressions, allows me to get closer to the chaos and the amorphousness of a day whose significance mainly arises from the declaration on radio and television that the revolution was victorious.

Second, ethnographers examine their subjects within a larger web of meanings that, while not part of the formal interview, constitute an important part of the ethnographer's research notes. Over the year, I was constantly invited to various talks and events organized by the diaspora communities that somehow touched on the revolution. These occasions, while not part of the formal interview process, provided important opportunities for me to deepen my relationships with the communities and to gain insight into my subjects' younger and often more political selves. One interviewee invited me to her professional association's election, held at a restaurant in Paris. Most of the association's members are Iranians who had been active in the revolution. As I watched them campaign, it was clear that I was watching them reenact the political behavior they had engaged in as young student activists in the 1970s. Their gentle and not-so-gentle joking with each other about speechifying or ideological posturing would sometimes lead to stories of their days in Iran, particularly in the fall of 1978, when leftist activity came into the open. It also allowed me to understand their connections to each other in the prerevolutionary period. Even though I didn't record these events per se, I used my observations (which I wrote down afterward) to deepen and contextualize my later interviews. For example, these "extra-interview" occasions allowed me to identify interviewees who had been in the same prison together in the 1970s (to preserve the anonymity of the people I was interviewing, I could not ask direct questions about this). Having this information allowed me both to fact-check some of the information I was receiving and also to further investigate certain topics, such as the communal arrangements of the prisons and the flow of information into and out of the prison system.

The third reason is the ways the interviews are used. A variety of factors—the anonymity of the interviewees, the unrepresentative sample, and the wandering nature of the interviews, some conducted over month-long periods, some in two-hour sessions—create the impression of unwieldy source material. So how to use them in writing a history of the experience of the Iranian Revolution?

Here, the difference between ethnography and oral history becomes more pronounced. Oral history as a general rule discourages anonymous interviews for a variety of reasons. But in this project, my focus is less on recovering individual voices and more on observing patterns and threads that run through the interviews, such as words, events, or objects that repeat from one person to another, regardless of their demographic or ideological background. These shared memories are what pull my interviews together and point the way toward what can be called the "revolutionary experience." My interviewees' shared memories include, for example, hand-copying books and pamphlets, hiking in the mountains (where clearly they felt freer to exchange ideas and books), and having family members who were partisans of a spectrum of revolutionary ideologies (religious families had leftist and Islamist children, and vice versa). As such, the ideological divisions historians have identified between the Khomeini faction, the religious-nationalists, and the left in the lead-up to the revolution do not reflect the muddled experience of people's lives at the time.

Rare is the historian today who reads a document purely for the information it contains. The provenance of the document, the context in which it was created, the identity of the author—all are crucial to the ways in which we read historical documents. The same applies to my interviews. In trying to understand the experience of the revolution, the who, when, and why of the interviews themselves crucially come into play. In other words, I interpret the interviews by incorporating the bias of the "sample," just as one should with any written document.

In the end, though, this project is not an ethnography of the 1979 revolution but rather an attempt to bring together ethnographic and historical research methods to understand the granular texture of a revolutionary experience. Because of its temporal position—old enough to be archived and historicized, young enough to give us access to living memory—the Iranian Revolution provides historians of all revolutions great insight into the minutiae of how a social upheaval is imagined and experienced before and after it is named a revolution.

Naghmeh Sohrabi is the Charles (Corky) Goodman Professor of Middle East History and the associate director for research at the Crown Center for Middle East Studies at Brandeis University. She is the author of Taken for Wonder: 19th-Century Travel Accounts from Iran to Europe (Oxford Univ. Press, 2012). She was a Mellon New Directions fellow during the 2014–15 academic year.