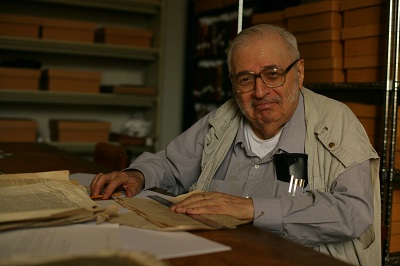 Born in New York City, Joseph León Helguera grew up in a multilingual, multicultural family. His father had immigrated to New York from Mexico in the aftermath of the revolution, and his mother's family arrived from Austria in the 1890s. Helguera developed a love for books and Latin America while spending many hours in bookshops with his Austrian grandmother and visiting relatives in Jalisco, Mexico. Shortly after his 18th birthday, he enlisted in the US army (1944–46) and was eventually stationed in the Philippines. On the GI Bill, he attended a burgeoning new college created for American students in Mexico, Mexico City College (now the Universidad de las Américas). He studied Hispanic and Hispanic American history, graduating in 1948. At a time when the number of publishing historians of Latin America in the United States could be counted in the dozens, Helguera chose to do his master's and doctoral work at the University of North Carolina, Chapel Hill. Rather than his ancestral Mexico, he concentrated on the history of Colombia and northern South America. Even before receiving his PhD in 1958, he began teaching at North Carolina State University. In 1963, he moved to Vanderbilt University as an associate professor; he was promoted to full professor in 1968 and continued teaching at Vanderbilt until his retirement in 1991.

In the 1960s, Helguera became one of the leading figures in the study of 19th-century Latin America, with a focus on Colombia. He wrote his dissertation and many published articles on General Tomás Cipriano de Mosquera (1798–1878), one of the heroes of Colombian independence in the 1820s and president of the country on multiple occasions. Directing nearly two dozen PhD dissertations and MA theses from the 1960s to the 1980s, Helguera played a key role in building up the study of Colombian history in the United States. He spent a term as a visiting senior fellow at St. Antony's College, University of Oxford, and served on many review panels and editorial boards during his long career. In the early 1960s, he was one of the experts hired to train the first group of Peace Corps volunteers heading to Latin America. Among his hundreds of articles, essays, and reviews, his most important work was a four-volume edition of the correspondence of General Mosquera, which he edited with one of his former students, Robert H. Davis. Helguera was a proud member of the historical academies of Peru, Ecuador, Colombia, and Venezuela, and was awarded the Order of Andrés Bello for his contributions to the study of Venezuelan history.

Helguera passed away on April 20, 2015, after a short illness. He was preceded in death by his daughter, Eugenia Byrd Helguera. He is survived by his wife, Byrd S. Helguera, and two sons, Joseph Hamilton Castle Helguera and Leon Arcadio Eduard Helguera.