History on Wheels: Hitting the Road with the Traces BUS-eum and Philly History Truck

On an autumn day in Iowa, an old school bus with brightly painted farmhouses and other familiar sights on its exterior pulls into a small town, attracting residents' curious gazes. Meanwhile, an eclectic group of neighbors, artists, and historians gathers in Philadelphia's Chinatown North for a "storytelling block party," organized by a historian in a truck. In both scenes, small staffs bring community members together to tell their own stories—with large vehicles to help. Mobile history, it seems, is on the rise. 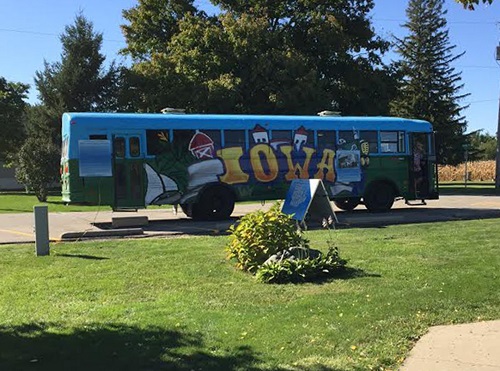 The Iowa project, Traces, rambles throughout the state in a retrofitted school bus, known as the BUS-eum. Established in 2001 by historian and native Iowan Michael Luick-Thrams, Traces travels to schools, museums, churches, and other public spaces to start conversations about local, regional, and family history. This year's exhibit, At Home in the Heartland: How Midwesterners Came to Be Us, rolled out in September and will visit all 99 counties in Iowa. At each stop, BUS-eum driver and docent Irving Kellman gives tours while members of different generations gather for a family history workshop and a public forum. Informed by historical knowledge, younger Iowans learn about their roots from their elders, and citizens understand their communities through discussion.

Half a continent away, the Philadelphia Public History Truck just drove into its third year. History Truck is the brainchild of Erin Bernard, a public history MA from Temple University. Inspired by years of community service, a love for the urban landscape, and a casual stroll past campus food trucks, Bernard and her truck now spend a year in a single Philadelphia neighborhood, working with neighbors to construct an exhibit on a topic of concern there. This year, the truck is parked in Chinatown North, where project volunteers and residents will work together to provide historical background on the pressing issue of homelessness.

There are significant differences between these mobile history projects. Traces starts with broad content, letting discussion follow; History Truck collects oral histories as the basis for its exhibit. Traces explores rural communities as well as cities, while History Truck focuses on the urban landscape. Traces' mission includes archiving family trees, while History Truck collects oral histories of present-day neighbors. But they do have one thing in common: values.

Let the Community Drive the History

Neither the Traces BUS-eum nor History Truck organizers try to predetermine the exhibit experience. "The focus is on the visitors," Luick-Thrams says. "They provide the narrative; we just midwife discussion." At Home in the Heartland's displays provide neutral starting points for conversation. One panel describes the Great Depression in Iowa, then prompts visitors to share their own stories. Luick-Thrams says his mother's family used sugar sacks for underclothes. "We want Iowans to come to us and tell their story, which is also the regional story and the national story in microcosm," he explains. Asked what tips he had for others looking to start a local mobile history project, he replies without hesitation, "Ask why you're doing it. What is your big question? Who are the people you'll be working with, and what is their big question?" In other words, the historian should let personal discussions inspire connections and further questions. 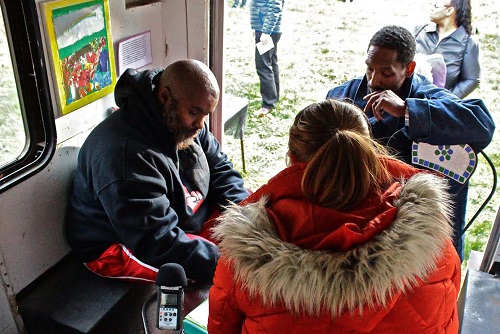 Bernard's process involves local people at all stages—and those people even influence which neighborhood to go to next. History Truck has worked with East Kensington, North Philly, and Chinatown North, usually at the request of residents. Bernard says the president of the East Kensington neighbors' association loaned the project the truck it has been using; another resident helped her acquire the necessary petition signatures to close a street for a storytelling block party. "It was one hand in the academy, one hand from the community," Bernard reflects, "and I think there's a certain authenticity to the way that the project works because it's completely dependent on things that are not just me and not just from the university."

Local issues also determine the content of the research. "In each neighborhood, there are often trends in what we hear, and that's how we decide what the final exhibition will be about," Bernard explains. In postindustrial East Kensington, people shared memories of fires at old textile mills within the past few years, which prompted an exhibit on the history of fires in the 19th century, when the mills were still operational. Of the project's goals for Chinatown North, Bernard says, "We're looking at this year as a way of raising awareness about the history of homelessness, not so much to take an activist standpoint but to provide some information and tools for community conversations that can be productive instead of about blame."

By focusing on topics that are meaningful to communities, Traces and History Truck encourage people to see ­themselves as a part of history. A longtime genealogist, Luick-Thrams explains, "To get to the questions 'How did I get to be here, and how did I get to be who I am?' I have to go through my family." Traces invites area residents to bring their family trees to the BUS-eum; these trees then go to the Iowa Genealogical Society.

When people encounter BUS-eum exhibits, memories arise spontaneously, which, Luick-Thrams argues, helps them feel a greater connection to history. As docent, Kellman has taken 350,000 visitors (by his own count) through the BUS-eum. The son of Jewish immigrants, he volunteered for civil rights in the South, was a self-described 1960s "flower child," operated a cinema, and worked on tugboats before joining Traces. With that kind of story, it's no wonder he loves hearing those of community members. During the first Traces tour, which showcased the history of German POWs in the Midwest, one visitor brought in a woodcut of a couple kissing under a street lamp—the subject of the popular World War II song "Lili Marlene," sung from the perspective of a sailor separated from his love. The visitor was a descendant of a prison guard who had "married his sweetheart" and received the woodcut as a wedding gift from a POW he had befriended, a skilled German woodcarver. "These individual stories that are so wonderful get lost in the big picture, but they make up that big picture," Kellman reflects.

Both projects also emphasize the importance of archival research alongside discussion and oral history. "Some people are most excited to come to our shows because they'll see archival reproductions of an event that they told us about with more information than they had originally shared," Bernard says, remembering a particular event at an exhibit on urban farming in North Philly during the project's second year. She had interviewed "Sharon," an urban farmer, and researchers soon found 1970s TV footage of Sharon's mother talking about urban farming. They incorporated the footage into an installation for the final exhibit. Through the historical record, Sharon encountered her mother talking about their shared passion. "It's not just about celebrating people, it's also a way of educating those urban farmers that they're part of a longer story, they're part of a legacy," Bernard says.

Ultimately, it's not just the mobility of the Traces BUS-eum and History Truck that makes history more accessible to people—it's also that they bring neighbors into the discussion. Of the BUS-eum, Luick-Thrams reflects, "It's democratic; it's not snobby. A lot of people feel intimidated by going into a lecture hall." Bernard echoes this sentiment: "Part of the project is to consider how we can deconstruct silos in the academy to interpret history in a way that's meaningful for people on the ground in Philadelphia." As both rural and urban areas evolve demographically and in their built environments, projects like these help ensure the past doesn't get lost. Perhaps the idea of "history on wheels" signifies that no one will be left behind.

The Philadelphia Public History Truck will continue work in Chinatown North this year and will involve graduate and high school students. Follow Erin Bernard's blog at philly historytruck.wordpress.com for updates. Traces will continue to tour Iowa counties through November and resume tours in the spring; for a full schedule, visit roots.traces.org.