Dusting Off History for Veterans Day: Military History Sessions at the Annual Meeting

Today across America, parades and speeches will celebrate Veterans Day. As the Veterans Administration states, the day is “a celebration to honor America’s veterans for their patriotic love of country, and willingness to serve and sacrifice for the common good.” Undoubtedly, history, particularly military history, will be dusted off and insterted into speeches highlighting America’s greatness. The historically aware may even reference Veterans Day’s origins in Armistice Day and the tragic losses of World War I. For many Americans, this patriotic version of military history may be their only exposure to the subfield.

In the upcoming AHA annual meeting in January, the breadth of panels on military history highlights the diversity and inclusiveness of the field while also challenging the very definition of military history. As the graduate representative for the Society for Military History, I have had the privilege of meeting the next generation of military historians. My colleagues work on topics ranging from US and British military attachés in the interwar years to the complex relationship between the Spanish and French Empires and their Native American allies in the early colonial period, while I work on NATO’s humanitarian assistance during the 1999 Kosovo Refugee Crisis. What ties military history together is a common interest in one of the most basic conditions of humanity: conflict. Conflict, however, is never isolated. It is intrinsically intertwined with the societies and cultures that wage war.

This January, the AHA will host over 30 panels that directly relate to what I consider military history. Session topics range from the imperial ideologies of crusading in medieval Europe (148) to the US military’s attempts to regulate the sexuality and gender of soldiers and veterans (165). The intersection of military history and queer history in this panel is an example of how military historians often bring together multiple schools of thought and methodologies to better understand conflict and the organizations that wage wars.

Two themes stand out this year. One is the strong relationship between migration and conflict. The panelists of “Migration and Mobility during World War I” challenge migration periodizations that “bracket” the war itself, instead arguing that the unique wartime conditions “illuminated experiences that might remain hidden during peacetime.” Meanwhile, tying into today’s Veterans Day celebration, the panelists of “The Great War, Transnational Experience, and International Migration” will examine nations’ use of Armistice Day commemorations to cement the tie between veterans and their countries, although the large number of veteran-emigrants raises doubts about this national bond. Other examples of the interaction between migration and conflict are less immediately evident. For example, Professor Sarah Kovner (14) examines the “military comfort women” who worked near US military bases in occupied Japan and how the relations between these women and US military personnel have shaped wider relations between Japan and the rest of the world.

A second theme is the intersection between science and military history. “Military-Industrial Toxins from World War II to the Palomares Semicentennial” explores the military-industrial complex in relation to the chemical industry and the environmental costs of America’s chemical wartime aids. Meanwhile, “Medical Ethics in 20th-Century Latin America” examines medical experimentation on displaced populations. The forced displacement of the indigenous Yaquis in Mexico created an environment where Mexican doctors could conduct yellow fever experiments on them. Similarly, Guatemala’s Ten Years of Spring provided US doctors with the opportunity to infect human subjects with sexually transmitted diseases. Venturing into trauma studies, “The Politics of Invisible Wounds from the Civil War to the War on Terror” examines how invisible wounds, variously called “neuralgia,” or “post-traumatic stress injury,” are not simply the result of medical symptoms, but also reflect national imaginings of the cost of war, while “New Direction in Civil War Trauma” (17) focuses on how trauma was conceived of by soldiers, doctors, and society in the 19th century.

Additionally, the Society for Military History sponsors the annual George C. Marshall Lecture in Military History. Pulitzer Prize winner Rick Atkinson will present “Projecting American Power in the Second World War,” drawing on his recent Liberation Trilogy. Even if World War II is outside of your area of study, I highly recommend stopping by the Society for Military History’s reception after the talk. Whether you’re a military historian, occasionally teach classes with military topics, or are generally interested, please visit. Also, the Society strongly values and supports its graduate student and early-career members and would love the opportunity to get to know more of you.

Conferences often bring the dual questions of “What kind of historian are you?” and “What do you study?” Reading the AHA program for this January reminds me, once again, the difficulty in defining myself as an historian. I identify not only as a military historian, but also as an Americanist and an Europeanist. I not only study war, but also diplomacy and human rights. Military historians, like the subfield of military history, study diverse topics related to war and the organizations and societies that wage war. The AHA annual meeting in January showcases the inclusiveness of the field today. 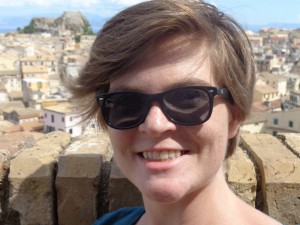 Mary Elizabeth Walters is a PhD candidate at University of North Carolina, Chapel Hill, and is the Society for Military History’s graduate representative. She studies NATO’s involvement in refugee assistance in Albania during the 1999 Kosovo Crisis and its interaction with Albania and NGOs. She is currently in Albania on a NSEP Boren Fellowship.