In 2016, national organizations and community groups around the country will celebrate the 50th anniversary of the National Historic Preservation Act (NHPA). Signed into law on October 15, 1966, the NHPA created a system of legal classifications as well as grants, loans, and tax incentives, with the goal of protecting the heritage of the built environment. Half a century later, the NHPA continues to provide a framework for community rehabilitation and a spur for tourism. To celebrate this milestone, local and national groups have launched a multiyear program called Preservation50, the mission of which is "to celebrate, learn from, and leverage the National Historic Preservation Act's first five decades to assure historic preservation's vibrant future in America." 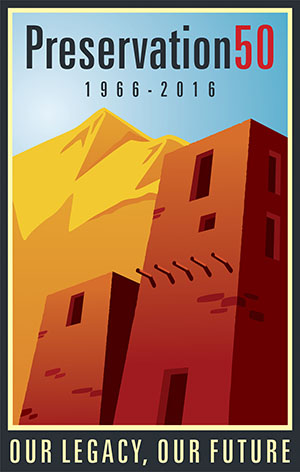 The National Historic Preservation Act of 1966 emerged out of a period of concern about the direction of the nation's built environment. After decades of white flight from historic city centers, urban renewal projects of the 1950s and '60s often involved the destruction of landmarks and historic architecture. The depopulation of small towns, too, left quaint Main Streets in disrepair. In response to concerns about the loss of the country's heritage, symbolized by historic buildings, Congress passed the NHPA. The act declared that "the spirit and direction of the Nation are founded upon and reflected in its historic heritage" and argued that "the historical and cultural foundations of the Nation should be preserved as a living part of our community life and development in order to give a sense of orientation to the American people." But the NHPA is more than a statement of ideals. It created a structure of incentives and policies to rehabilitate historic buildings and protect natural landmarks from commercial development.

For those who work in or enjoy historic sites, the NHPA established many familiar programs. It endowed the National Trust for Historic Preservation and the National Register of Historic Places. Achieving National Register status gives a site access to federal historic rehabilitation tax credits. Section 106 of the NHPA establishes a review process, managed by an Advisory Council on Historic Preservation, when federal activities, programs, or policies have the potential to impact historic sites.

The result of this extensive legislation has been the creation of a $1 billion industry around cultural resource management. The Preservation50 celebration, managed by the law and policy firm Cultural Heritage Partners, is supported by $3 million in funding from the National Conference of State Historic Preservation Officers.

The legal regime established by the NHPA has not been without its critics for the way it dominates urban planning and development. Some economists and urban planners have charged aggressive historic preservation with restricting new development, which results in higher prices for urban residents. Historic preservation can privilege wealthy residents, who can use political support and legal resources to prevent construction of affordable housing under the seemingly innocuous logic of protecting historic architecture.

But the NHPA boasts some impressive outcomes for individuals and communities. Preservation50 estimates that the economic benefits of NHPA's historic tax credit include the creation of 2.3 million jobs, the saving of 38,700 historic structures from destruction, and the generation of $106 billion in private investments. Just in the past 25 years, preservation advocates count 1,600 communities with revitalized downtowns and main streets thanks to NHPA programs. From a sustainability and environmental perspective, historic preservation can reduce building-construction debris by as much as a third.

This is the legacy that Preservation50 seeks to celebrate and preserve for the coming generations. The campaign's mission includes five specific goals: building a strong coalition of partners to power a more effective national preservation movement; learning from the first 50 years of NHPA to plan its future; advocating for the value of preserving historic places to a broad range of Americans; educating for sound policies and enhanced funding support for heritage preservation; and engaging and developing the preservation movement's next leaders.

Preservation50's activities and resources include tools that invite anyone interested in historic preservation to learn more and interact. For digital natives, there will be a heritage tourism app. For K–12 teachers, Preservation50 is developing a suite of educational materials about historic preservation. Next year, the group will release a documentary about "what the world was like before the Act and how, since the Act's signing, we have become a stronger nation because of preservation efforts across the country."

From local heritage organizations all the way to the halls of Congress, the commemoration will encourage volunteer programs at preservation organization as well as lobbying efforts to increase financial resources for the Historic Preservation Fund and other programs.

If you are interested in joining Preservation50's efforts, there are a number of ways to get involved. You can get updates about the campaign and share your ideas on its website. The group is encouraging community groups around the country to organize their own events to celebrate historic preservation. You can plan an event in your community or reach out to your State Historic Preservation Office to assist in its activities. If you have an artistic flair, you can enter Preservation50's photography and video contest, which will "draw on participants' creativity and enthusiasm to show the important role of historic preservation in communities." If you're interested in professional development in the area of cultural resource management, consider the Online Leadership Development Platform.

Historic preservation of landscapes and buildings is just one of the many ways we remember and interpret the past. But just as everything has a history, the legal and political system that the United States has used to protect its heritage reflects important facets of our society. Historians have much to learn from the legacy of the NHPA and how we celebrate it through Preservation50.

Jane Fiegen Green is the marketing and public relations manager for the American Historical Association. She tweets @janefgreen.