Creating a Course on the History of Food and Farming: A Teacher's Diary

I have found it fascinating over the years that when I ask students in the classroom whether they have any ancestral connection to farming, only a few hands go up, and usually these are of students from parts of the world outside the United States—the Caribbean, Africa, South America, Asia. This exercise dramatizes the distance of many of us from traditional methods of food production, and it gives us an entree to talking about the larger historical implications of relationships between town and country, colonization, class, and trade.

I have long wanted to teach a course about farmers and agriculture, but I am of a certain generation—the wrong one, in fact, to be on the vanguard of a food movement, either the health one or the justice one, although I like to think I am a fellow traveler of both. But I had studied the latter pioneers of peasant and agriculture studies dating to the 1973 inaugural issue of the Journal of Peasant Studies—Sidney Mintz, Teodor Shanin, Eric Hobsbawm—as well as James Scott, Suzanne Berger, and Eric Wolf, so I had the theoretical and comparative cases stacked up. Once, however, I conducted my field work in Brussels and other regions of the European Union, investigating elite and interest group deliberation in agriculture policymaking, I had gotten my hands dirty as it were, and felt I had earned my stripes. It was time to propose a new course—"Food and Farming"—to my department chair at the City College in New York.

I had the go-ahead to teach the course as an upper-level undergraduate elective, but I had a problem: How to translate for students my own interests while developing a compelling theoretical orientation, one that would get us to a meaningful investigation of the arcs of production and consumption outside of simply taking stock or enumerating the follies of industrial agriculture. I turned to those early peasant studies pioneers to establish foundations to discuss rural economy, peasant politics then and now, and to lead us to more contemporary topics such as sustainability, subsidies, the World Trade Organization, and agribusiness.

In addition, we would read the very topical Michael Pollan, populist soldier in the charge against food processing; The Cook Book of Alice B. Toklas (and what the occupying officers ate in the Bugey); Judith Carney and the "black rice" debate; the ubiquitous academic nutritionist, Marion Nestle; Marc Bloch; anthropologist of food and memory, David Sutton; food activist Vandana Shiva; some of the early work of Carl Friedrich (linking National Socialism to the German peasantry); a decisionmaking tour of the European Union's Common Agriculture Policy. We would also read earlier historical and now classic literature, including Sidney Mintz's Sweetness and Power and more contemporary readings inspired by Mintz, on bio-ethanol and trans-Atlantic creole narratives tied to tobacco production. And there was much else.

During the formation phase of the course last winter I had a chat with a colleague, a Europeanist, about finding the thread to make sense of the far-flung, eccentrically gathered literature, and his reply was, well, that's a course without parameters. He was right. Essentially conceptual, where would I find a model? This was a history course, not a policy course, nor a food science course, nor anthropology, literature or film studies. If the focus was to be on the European experience (for course bulletin purposes) and if I wanted to keep the black rice debate as a centerpiece (not centrally European but nevertheless), I would have to bring in the comparative methodology.

This ended up being a good move—Carney's engrossing study, alongside critiques published in the February 2010 issue of the American Historical Review, proved in the end to be among the students' most engaging set of readings. The debate offered exotic narratives across many subjects in the tradition of the Annalistes; it offered careful argumentation, a near global reach, and a foodstuff (rice) every culture could relate to. The debate gave students a picture of what historians really do—parse the evidence and interpret it, employ the tools of logic, summon the art of storytelling, and disagree, defend and discuss. 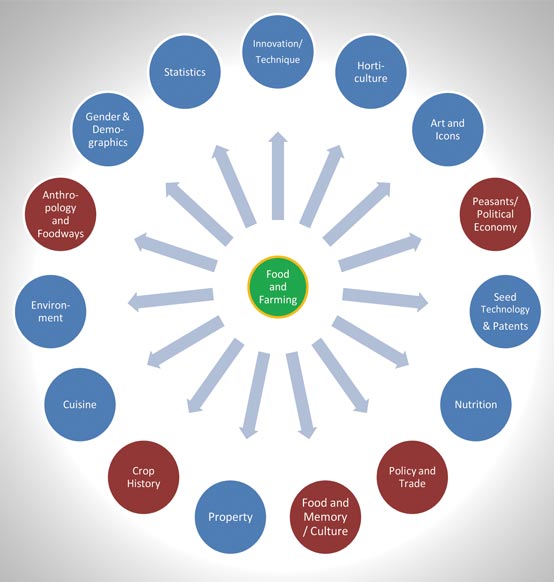 To illustrate and flesh out the various categories more clearly in the classroom, I devised a thematic wheel to depict a taxonomy of food and farming studies, as part of a PowerPoint presentation. This visual tool also helped immensely in organizing my own thoughts and objectives for the course, particularly as I felt it to be of absolute importance that analysis and not simply transmission of information was to be central to the enterprise.

We discussed the wheel at the start of the semester and again at the end, plugging the various readings into the appropriate categories while noting that some of them had multiple categories. This exercise allowed us to review the methodologies (some studies were based on oral history, for example), objectives, and disciplines brought to bear by the authors we studied and to chart them in relationship to one another. We also reassessed the wheel of taxonomies and took note of subject headings that were missing (such as consumer patterns or demand and sociology altogether).

The course filled up (a happy consequence of a spike in history majors and high demand on a limited number of history courses offered each semester), and I was encouraged by the diversity of the students, drawn from majors in art, Jewish studies, literature, history, legal studies, philosophy, bio-med, some CUNY-baccalaureate honors students who were designing their own majors in agriculture studies, and some trained chefs and experienced young farmers. I took comfort: If I didn't know something, there was enough technical expertise in the room whereby someone else would have an answer or at least the discussion would be informed (Is masa made from a certain species of corn? Are there kosher rules for cattle fodder?).

Regardless of background, we were all historians for the duration, twice a week for 14 weeks. We read analytically, critically, learnedly, even while addressing the lure of fast food which many of us talked about in the first person, with gusto and generally little remorse. We would have been good cases for the social anthropologist examining food and memory—Irish soda bread, truffles (the kind rooted for), peanut butter and pickle sandwiches, turkey dinner: why did the memory of these foods animate us so?

After the third week of what I would call classic peasant studies, students appeared to grow weary of the subject (except perhaps for the Latin Americanists in the group who recognized the relevance), anxious to get to more topical material, or at least material that was closer to their own interests—genetically modified foods, high fructose corn syrup, subsidies, the slow food movement. It wasn't entirely irrelevant to be reminded that the models developed in the 1970s for analysis of peasants still held for rural cultivators, and not just in the global South or outside Europe. This would become more evident once we examined documents of the European Union's Common Agricultural Policy and the role of farmers in the decisionmaking process.

The learning curve was steep. Finding a path along unsure territory in the early stages didn't stop us from being mountain goats at the end, thinking through careful analyses written and spoken, referring to authors familiarly and maybe even fondly, looping and wending around soybeans and sugar. Some students became astonishingly adept at picking up new concepts and vocabularies, writing the formal critique, inverting arguments, raising questions about moral economies, comparing old systems and new, slavery and peasantry. Final take-home exams showed true analytical learning.

At the end of the semester, the class shuffled over, in a light spring rain, to a student-run community garden just off our upper Manhattan campus and across the street from the homestead of Alexander Hamilton. We had a field happening, a planting fest, to sow, after all was said and done, what we had reaped.

Barbara Syrrakos received her PhD in political science and historical studies from the New School for Social Research. She is a doctoral lecturer in the Department of History at the City College in New York and has written on the European Union's Common Agricultural Policy and on Greek history. She would like to acknowledge her teachers at the New School and her history colleagues and students of food and farming at the City College, for inspiring ideas and discussion. She can be reached at bsyrrakos@ccny.cuny.edu.