The Hurt Locker: War as a Video Game

The architecture’s perfect. You could shoot 360 degrees. But the great bonus that I did not anticipate was the refugees. There were hundreds of thousands of Iraqi refugees, many of whom are actors because there was a fairly thriving cultural community before the occupation. These refugees are all living in Amman. All of my background extras and some of the speaking Iraqis…are all Iraqi.

—Filmmaker Kathryn Bigelow speaking of the benefits of shooting her film in Amman, Jordan. 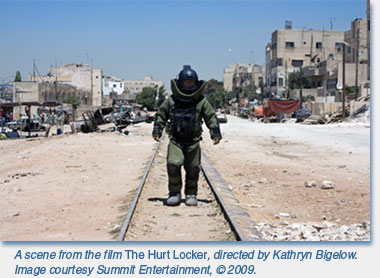 In some ways The Hurt Locker is a 21st-century Triumph of the Will. Like Leni Riefenstahl, Kathryn Bigelow is a brilliant filmmaker with a taste for iconic images and the masculine heroic mode. In her production notes, Bigelow says that “on a metaphorical level” this film about an Explosive Ordinance Disposal (EOD) unit in Iraq, suggests “both the heroism and the futility of the [Iraq] war.” The heroism is everywhere but despite there always being another bomb to defuse, one doesn’t get a sense of futility since these are, with two exceptions, skillfully rendered harmless. In fact, nothing in the film engages the futility of war.

The film follows the daily round of danger the unit experiences as the soldiers count down to rotating home. For its lack of an overt political position on the war in Iraq, combined with its formal cinematic qualities, The Hurt Locker has been uniformly praised as the best feature film yet about the war in Iraq. Unlike the “well-meaning topical dramas” that have attempted to deal with the war in Iraq, A.O. Scott observed in the New York Times, this one, loyal to its characters, is “too busy, too preoccupied with the details of survival to reflect on larger questions” about what the troops are actually doing there. You will leave the theatre, Scott promises, “shaken, exhilarated and drained, but you will also be thinking.” He does not say what you will be thinking about except that it won’t be the causes and consequences of the Iraq war, and in his eyes, the movie is perhaps a “little evasive” but admirable in its insistence on staying close to the soldiers’ experiences.1 David Denby, in the New Yorker, was even more enthusiastic: This is a film to be enjoyed “without ambivalence or guilt. … [It] narrows the war to the existential confrontation of man and deadly threat.”2 Jeffrey Anderson, introducing an interview with the filmmaker at an internet site, was pleased that the film “doesn’t hurl any messages in our faces about the horror or futility of war. It’s not dreary, somber or self-serving. It’s not about politics or politicians, wives or families, insurgents or Iraqis.” In short, it “dares to suggest that, sure, war is hell, but it’s not without its pleasures.”3

Bigelow herself may be less easy about the pleasures of war than the interviewer. The film is based on an essay, “Man in the Bomb Suit,” by Mark Boal and takes as its epigraph a quote from Chris Hedges’ War Is a Force That Gives Us Meaning: “The rush of battle is a potent and often lethal addiction, for war is a drug….” A more appropriate epigraph would have been this one, also by Chris Hedges: “All narratives of war told through the lens of the combatants carry with them the seduction of violence.” Hedges knows what Bigelow and her admirers in the press seem not to understand: “It is impossible to know war if you do not stand with the mass of the powerless caught in its maw.”4

The Hurt Locker focuses, relentlessly, breathlessly, on an American bomb disposal unit. The viewer has difficulty resisting the force field of its intensely present dangers even though the film often resorts to the tired tropes of generic war movies. From the first frame, the viewer knows which of the three main characters will become a casualty (the jittery, vulnerable one); that the kindly, if foolish military psychiatrist who has been taunted into joining the unit on patrol and thinks he understands the Iraqis, will get blown to smithereens; and that the hero will return to the war after a brief stint of playing with his son.

It’s a video game of a movie, or war as a video game—much like the game one of the men in the unit plays with ferocious concentration. The camera places the viewer firmly inside the bomb suit and the audience waits, breathlessly, to see if the bomb being defused will blow up. But this is not, for all that, the existential situation Denby describes. The film emphatically takes place in Iraq and presents a picture of the war itself and not just of the exploits of its heroes. Only this Iraq war is clean and of the moment. It seems to have neither a history nor a future. It fills the screen with the possibility of instant death and with the subsequent relief at being able to draw another breath. Here, Americans are the targets of bombs rather than the ones who drop the bombs. No Iraqi civilians are killed by an American hand; the unit shoots only at Iraqis who shoot back; and the Iraqi enemy, rigging the tortured bodies of boys with explosives or locking a possibly unwilling man into a suicide bomb vest, is despicable, inhuman. The Hurt Locker is the perfect Iraq war movie, allowing the audience to support the troops without needing to wonder whether they should be fighting there in the first place. It offers no explanations, no apologies and only a thin patina of regret. It’s too bad, as Bigelow said in an interview, that the powerful .50-caliber sniper’s rifle had to be invented, but what an amazing weapon! As if to say, it’s too bad a bomb unit must roam the streets of Baghdad, but what amazing men!

There was an earlier Iraq movie, In the Valley of Elah (2007), adapted from a Mark Boal essay titled "Death and Dishonor."* The filmmaker didn’t need to go to Jordan for that one; it’s about the homecoming of a group of soldiers and the murder of a fellow soldier by one of them. Yet despite its focus on Americans, the film hints at the real face of the war in Iraq in its opening years. One of the soldiers, for example, tells of how his unit picked up a severely wounded insurgent and then deliberately and repeatedly exacerbated the man’s pain, laughing at his response to their mocking question: “Does this hurt?” The audience is left in no doubt that American soldiers liberally, casually dealt death to the Iraqis who got in their way, and they carried home an indifference to killing that extended even to murdering each other. In the Valley of Elah ends with Tommy Lee Jones, the patriotic veteran of earlier wars, turning the flag outside the local high school upside down in the classic signal of the country in distress. The Hurt Locker ends with Jeremy Renner, suited up, cockily walking down an Iraqi street toward yet another bomb.

The need for those who know how to defuse bombs is not limited to Iraq. The bombs that rained down on the southern provinces of Vietnam during that war continue to explode. More than a third of the acreage in six Vietnamese provinces remains seeded with bombs which have killed some 42,000 people since 1975. Only 3,345 acres out of 16.3 million have been cleared.5 Project Renew, an effort by the Vietnam Veterans Memorial Fund to train Vietnamese to identify and safely defuse the vast array of buried ordinance is the subject of a modest documentary.6 In one scene, school children who have memorized images of the various bombs that litter their province, cheerfully chant their names. Another scene artlessly generates the same sort of tension as The Hurt Locker: a Vietnamese man, unprotected by a bomb suit, digs out and subsequently explodes a bomb. The effort in Vietnam has not attracted ambitious film-makers like Kathryn Bigelow. “All narratives of war told through the lens of combatants carry with them the seductions of violence.”

—Marilyn Young is professor of history at New York University.

1. A.O. Scott, “Soldiers on a Live Wire Between Peril and Protocol,” New York Times, June 26, 2009, accessed online July 28. In this, The Hurt Locker resembles the praise heaped on those documentaries which similarly avoid polemics, such as “The War Tapes.” See Susan Carruthers, “The Iraq War on Film,” in Roy Grundmann, Cynthia Lucia and Art Simon (eds.) Blackwell’s History of American Cinema (forthcoming 2010).

4. Chris Hedges, War Is a Force that Gives Us Meaning (New York, 2002), 3; Hedges, review of The Photographer by Emmanuel Guibert, et al., in the New York Times Book Review, May 20, 2009. He concludes his very positive review of the book this way: “There is no fighting in this book. No great warriors are exalted. The story is about those who live on the fringes of war and care for its human detritus. By the end of the book the image or picture of a weapon is distasteful. And if you can achieve this, you have gone a long way to imparting the truth about warfare.”

6. Project RENEW: From a Bitter Past to a Brighter Future, was made for the Vietnam Veterans Memorial Fund in 2007. It is narrated by Barbara Koeppel and can be viewed on YouTube.

*The full title for In the Valley of Elah was omitted from the print version; we regret the error.