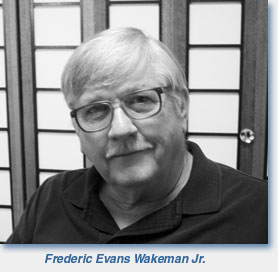 Frederic Evans Wakeman Jr., eminent historian of China who served as president of the American Historical Association in 1992, died of cancer on September 14, 2006, in Lake Oswego, Oregon, at the age of 68.

A master narrator, Wakeman wrote big, complex books that always managed to skip nimbly from the details of personality and political intrigue to a thick description of the social milieu and economic context in which the action took place. His vision was global and his chronological range long—from the 17th-century founding of the Qing dynasty to the philosophical foundations of Mao Zedong's thought. He combined the Sinologist's mastery of difficult literary sources with the cosmopolitan intellectual's attention to the comparative implications of his work. His books were full of pathos and human foibles, the argument carried by a rich narrative punctuated by lengthy footnotes offering telling anecdotes, analytical asides, or critical commentary on his sources.

Born on December 12, 1937, in Kansas City, Wakeman received a polyglot early education in a variety of schools in different lands, from Santa Barbara to Bermuda and Cuba to France, thanks to his peripatetic father, the well-known novelist Frederic Wakeman Sr., and his love of travel. As he described in his 1992 AHA presidential address, "Voyages," Wakeman was once taken out of school just so that he could accompany the family as it retraced—on the family's ketch, Chalene—the Cuban portion of the second voyage of Columbus. It was also Frederic Sr. who introduced Wakeman to history, with assignments to read Herodotus and Thucydides, Gibbon, Carlyle, and Toynbee, and provide dinner-table reviews for the edification of the family and the criticism of his father.

In 1955, Wakeman entered Harvard College, where he majored in European history and literature. Already fluent in Spanish and French, he added German and Russian to his linguistic toolkit and graduated Phi Beta Kappa. He turned to Chinese history while studying at the Institut d'études politiques in Paris, then earned his PhD degree in Far Eastern history at Berkeley in 1965, learning Chinese and Japanese in the process. He began teaching at Berkeley in the same year and, in a reversal of his multilocal childhood, stayed there for his entire 41-year career. Even when he served as president of the Social Science Research Council in New York from 1986–89, he continued to fly back each month to advise his graduate students at Berkeley.

Trained at a time when American China scholars could not even visit the country they were studying, Wakeman played a pivotal role, in the 1970s and 80s, in the opening of scholarly exchanges with the People's Republic of China. As educational adviser of the United States Inter-Agency Negotiating Team on Chinese-American International Exchanges in 1978, he helped ensure that the Chinese desire for scientific and technical exchanges would be matched by an opening of research opportunities in China for American scholars in the social sciences and humanities. In subsequent years he served on and chaired many of the committees that worked to expand cultural and scholarly relations with the PRC. It was a process that transformed the archival basis for historical research in China, and opened the possibility for fieldwork and immensely productive intellectual exchanges with a new generation of scholars from China.

The range of Wakeman's scholarship knows no parallel in the China field. His first monograph, Strangers at the Gate: Social Disorder in South China, 1839–61 (1966), was a pioneering work of local history, exploring the social unrest affecting the Canton region in the wake of the Opium War. History and Will: Philosophical Perspectives on the Thought of Mao Tse-tung (1973) was a deeply learned exploration of the philosophical influences on Mao's thought, ranging from Zhuangzi to Marx, from neo-Confucians to neo-Hegelians, probing sources from the textbook Mao used in college to his poetry during the Cultural Revolution.

Wakeman's most famous work is surely The Great Enterprise: The Manchu Reconstruction of Imperial Order in Seventeenth-Century China. This magisterial two-volume history is a work of great erudition—narrative history on a grand scale based on a remarkable range of official and literary sources of considerable linguistic complexity. Embedded within a complex tale of court debates and literati culture is a provocative analysis of the 17th-century crisis in China. The Great Enterprise was honored with the Joseph R. Levenson Prize of the Association for Asian Studies, which called it "a monumental work [of] extraordinary scope, ambition, and narrative power ... a true history written with an awareness of world events and global connections."

In recent years, Wakeman had been working on the political history of 20th-century China, with particular attention to Shanghai and the modernizing Chinese state's preoccupation with public security. Policing Shanghai, 1927–37; The Shanghai Badlands: Wartime Terrorism and Urban Crime, 1937–41; and his most recent book, Spymaster: Dai Li and the Chinese Secret Service were rich analytical narratives full of vice, opium, criminal gangs, assassinations, prostitution, espionage, intrigue, personalistic networks, and a process that he called, in one chapter, "criminalizing the government." Just before his death, Wakeman completed a draft of Red Star over Shanghai, a volume that will bring his story of security work in Shanghai through the last years of Nationalist rule into the early years of the People's Republic.

The tremendous range of Wakeman's scholarship and the even broader sweep of his reading made him an extraordinary mentor for a vast number of graduate students at Berkeley and for other young scholars who sought his advice and counsel. His intellectual curiosity was legendary, and he seemed to have read (and remembered) everything. But despite his vast learning, he had a velvet touch with his students — guiding them gently and allowing each to find his or her own voice. Always a busy man, Wakeman was not always easy to catch, but once you entered his office you had his undivided attention. His personal warmth dispelled all anxieties. His energy and enthusiasm were infectious, and one meeting could provide enough ideas to last for months. He was also a great raconteur, with a broad sense of humor and an explosive laugh. Unfailingly generous with his wisdom and counsel, he was also scrupulous in acknowledging in his prefaces every student who had offered the least bit of research assistance.

Just six months ago, Wakeman was teaching his last classes at Berkeley, meeting with students, and celebrating his retirement with humorous tales of a rich life. The University of California honored him with its highest award, the Berkeley Citation, a proper end to a career filled with many prestigious fellowships and honors. The end came all too quickly, robbing him of any golden years of retirement and the field of its most fertile and engaging mind. Wakeman is survived by his wife He Lea Wakeman; his sister, Sue Farquhar; three children, Frederic III, Matthew, and Sarah; and two grandchildren.