AHA's Roosevelt-Wilson Award to Be Conferred on Representative John Lewis 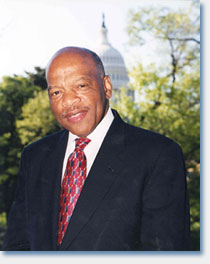 The American Historical Association instituted the Theodore Roosevelt-Woodrow Wilson Award in 2003 to honor a person not in academe—a public official or civil servant, for instance—who has made extraordinary contributions to the study, teaching, and understanding of history. At its 121st meeting, the Association will confer the award upon John Lewis, the congressional representative for the 5th District in Georgia. In honoring Representative Lewis, the AHA is recognizing in particular his unstinting efforts to establish a national museum of African American history and culture and for the key support he extended in Congress to history programs in the National Park Service.

John Lewis, who was born the son of sharecroppers on February 21, 1940, grew up on his family’s farm and attended segregated public schools in Pike County, Alabama. He was inspired by the words of the Rev. Martin Luther King Jr., and the activism surrounding the Montgomery Bus Boycott, to become a part of the civil rights movement.

As a student at Fisk University, John Lewis organized sit-in demonstrations at segregated lunch counters in Nashville, Tennessee. In 1961, he volunteered to participate in the Freedom Rides, which challenged segregation at interstate bus terminals across the South. Lewis risked his life on those rides many times by simply sitting in seats reserved for white patrons. He was also beaten severely by angry mobs and arrested by police for challenging the injustice of Jim Crow segregation in the South.

While still a young man, John Lewis became a nationally recognized leader, and was an architect of and a keynote speaker at the historic March on Washington in August 1963. Lewis also helped form the Student Nonviolent Coordinating Committee (SNCC), which he chaired from 1963 to 1966.

In 1964, Lewis coordinated SNCC efforts to organize voter registration drives and community action programs during the Mississippi Freedom Summer. The following year, Lewis joined with Hosea Williams, another notable civil rights leader, to lead over 600 peaceful, orderly protestors across the Edmund Pettus Bridge in Selma, Alabama on March 7, 1965. They intended to march from Selma to Montgomery to demonstrate the need for voting rights in the state. The marchers were attacked by Alabama state troopers in a brutal confrontation that became known as "Bloody Sunday." News broadcasts and photographs revealing that senseless cruelty helped hasten the passage of the Voting Rights Act of 1965.

Despite more than 40 arrests, physical attacks, and serious injuries, John Lewis remained a devoted advocate of the philosophy of nonviolence. After leaving SNCC in 1966, he continued his commitment to the civil rights movement as associate director of the Field Foundation and his participation in the Southern Regional Council’s voter registration programs. Lewis went on to become the director of the Voter Education Project (VEP). Under his leadership, the VEP transformed the nation’s political climate by adding nearly four million minorities to the voter rolls.

In 1977, John Lewis was appointed by President Jimmy Carter to direct more than 250,000 volunteers of ACTION, the federal volunteer agency. In 1981, he was elected to the Atlanta City Council. While serving on the council, he was an advocate for ethics in government and neighborhood preservation. He was elected to Congress in November 1986 and has served as Representative of Georgia’s 5th Congressional District since then. The 5th District includes the entire city of Atlanta, and parts of Fulton, DeKalb, and Clayton counties.

John Lewis holds a BA in Religion and Philosophy from Fisk University, and he is a graduate of the American Baptist Theological Seminary. He has received numerous honorary degrees and other honors from prestigious colleges, universities, and other organizations. Lewis’s life in the struggle for civil rights has been chronicled in Walking with the Wind: A Memoir of the Movement (which he coauthored with Michael D’Orso).