The National Parks and the Value of History

Heritage tourism is big business. A recent report on the economic impact of the National Park Service (NPS), "Economic Benefits to Local Communities from National Park Visitation, 2011," estimates that 279 million visits to the parks generated $30 billion in economic activity and supported 252,000 jobs, both in the park service and in communities surrounding the parks.

While budget-minded legislators may see historic sites and preservation as luxuries that might be trimmed from an austerity budget, cultural resources offer a good return on investment. National Park Service Director Jonathan B. Jarvis notes that the parks contribute $10 to the economy for every $1 in tax money invested in the National Park Service, which "makes good stewardship sense and good business sense."

The NPS study does not break out the percentage of economic activity generated by visitors to historic sites, but it likely comprises a significant proportion. According to Imperiled Promise: The State of History in the National Park Service, a 2012 report by the Organization of American Historians (OAH), history is a major part of the visitor experience at two-thirds of the 398 national park units. National Park Service visitor data for 2012 suggests that approximately 70 million of 282 trips to national parks were to monuments, historic sites, military parks, and battlefields.

Last year, visitors flocked to military sites such as Kennesaw Mountain National Battlefield Park in Georgia (1,935,909 visitors) or Gettysburg National Military Park in Pennsylvania (1,126,577 visitors) and sites such as Independence National Historical Park in Philadelphia (3,594,549 visitors) that have long been part of the national story. They also visit sites associated with the history of industry, such as Lowell National Historical Park in Massachusetts (537,551 visitors) and the history of social justice, such as the Martin Luther King Jr. National Historic Site (707,514 visitors). More than 75,000 people visited the remote Manzanar National Historic Site, which documents the internment of Japanese Americans during World War II and was highlighted as a model of effective interpretation by the authors of Imperiled Promise.

The economic impact study did not include the 49 national heritage areas, such as the John H. Chafee Blackstone River Valley National Heritage Corridor in Rhode Island and the Rivers of Steel National Heritage Area in southwest Pennsylvania. Heritage areas, which are public/private partnerships affiliated with the National Park Service, preserve and interpret historic landscapes and their cultural, natural, and recreational resources. A separate report, The Economic Impact of National Heritage Areas, estimated that the heritage areas generated $12.9 billion in economic activity and supported 148,000 jobs in 2012. Unlike national parks, heritage areas are not owned by the federal government and use federal funding as seed money to attract private, regional, and local funding. According to the report, heritage areas attract four dollars in outside funding for every federal dollar.

The OAH report identified "longstanding funding deficiencies" as a major obstacle to realizing the full potential for interpreting America's past at its national parks. Funding levels for the National Park Service have been flat since the mid-20th century, even as the number of visitors and the number of sites managed by NPS expanded. Like most other federal agencies, NPS faces mandatory budget cuts under sequestration, which will only exacerbate the problem.

The NPS report provides evidence for arguing that legislators should support continued investment in the parks for economic reasons. Historians should be heartened by the fact that travelers invested time and a considerable amount of money to engage with the past by visiting the parks, even as we ponder the challenges of interpreting the past in all its complexity with limited resources.

-Debbie Ann Doyle is the AHA's coordinator for committees and meetings. She is also responsible for public history issues. 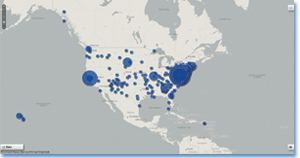 Now online at Geocommons, Perspectives offers an interactive map featuring National Park Service sites with a historical emphasis. This includes all the national historic sites and national historic parks, but also the national monuments that were specifically created to preserve or memorialize aspects of American history. Site markers are sized to visually represent the number of visitors to that site in 2012. Clicking on a marker brings up a box with information about that site.

The map shows an impressive number of locations and a wide distribution; only a few regions of the country lack history-oriented National Park Service sites. No one will be surprised that the eastern seaboard gets the most visitor traffic, but seeing the relative size of the markers drives home the disparity between the Lincoln Memorial's six million visitors and the Fort Union Trading Post's 12,000.

We invite readers to download and add to the dataset, and to let us know of any additional sites that should be included.