Spring Congressional Briefing on the History of Immigration Policy

In early April, as Congress prepared to debate a major reform of US immigration laws, the National History Center brought together three distinguished historians to discuss the history of that body’s role in deciding who should be allowed to immigrate to the United States. The briefing, organized by the National History Center for congressional staff, was moderated by AHA Executive Director James Grossman, and is part of a series of congressional briefings designed to provide historical context and perspective on current issues for policy makers and members of their staff.

Tyler Anbinder (George Washington Univ.), a historian and a consultant on Martin Scorsese’s film Gangs of New York, noted that prior to the Civil War, the largest number of immigrants came from Ireland and Germany, and that attitudes toward them did not differ significantly from views of immigrants today. Native-born Americans feared that Irish political participation would dilute their own influence and believed that the Irish imported poverty. They also worried that first-generation immigrants flocked together and continued to speak the languages of their homelands, rather than English. From his research, Anbinder identified three lessons for today’s policy makers. First, history demonstrates that hostility toward an immigrant group will subside as its members become better integrated into the society and economy. Second, immigrants are not as poor as they seem; in fact, they are dedicated savers and senders of money to relatives back home and choose to live and work in patterns that facilitate this. And finally, postponement of assimilation to the second generation is nothing new: When it comes, it will be permanent. “Today’s immigrants are simply the latest chapter in the never-ending story of the making of America,” he concluded. 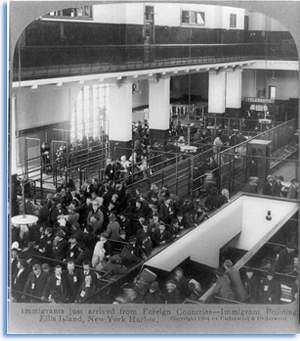 Alan Kraut (American Univ.), a professor and a scholar of the history of medicine and public health as well as immigration and ethnicity, argued that prior to the 1870s, immigration regulation was almost entirely the responsibility of the states. It was only with the passage of the Chinese Exclusion Act of 1882 that Congress began to dictate immigration policy. This overtly racist legislation, which banned immigration of low-skilled Chinese workers, was clearly rooted in economic concerns. Kraut pointed out that it was not only native-born whites who championed the new law—African American newspapers editorialized in support, and the most spirited agitation came from Irish immigrants. Both groups feared that Chinese workers would take their jobs. Kraut also noted that between 1890 and 1914, European sources of immigration shifted to Italy, Russia, Greece, and eastern Europe. These new immigrants were seen in racial terms as well and were also feared as a source of contagion. Their sheer numbers may have had something to do with these concerns: Between 1871 and 1900, some 11.7 million people immigrated to the United States. From 1901 through 1920, an additional 14.5 million entered the country.

By 1921, nativist concerns led to passage of the Emergency Quota Act, initiating an approach that would profoundly affect immigration policy. It introduced the idea of proportional quotas based on the number of immigrants who had previously arrived. Congress was responding, Kraut said, to pressure from those already here to “maintain a racial balance in the United States and to exclude the southern Italians and eastern European Jews who were often looked upon … as persons of different races.”

At the same time, Congress was receiving entreaties from growers, especially in the South and Southwest, who needed cheap labor to cultivate and harvest crops. The Johnson-Reed Act, which was the basis of US immigration policy from 1924 through 1965, resolved this conflict by limiting immigration from the entire world to only 150,000 persons a year, divided among sending nations according to the “desirability” of their emigrants. Quotas were based on the 1890 Census, before the impact of large-scale Italian and eastern European immigration was recorded, and exempted the Western Hemisphere from the quota system, thus allowing the free flow of workers across the US-Mexico border. “Congress did in fact transform immigration policy from a state-centered system to a federal system that controlled and prioritized potential admittees largely on racialized conceptions and labor needs,” Kraut said.

Mae Ngai (Columbia Univ.), professor of history and Asian American studies and author of Impossible Subjects: Illegal Aliens and the Making of Modern America, discussed the guest worker Bracero program and the Hart-Celler Act of 1965, which radically changed immigration policy and serves as the basis for current measures. Hart-Celler did away with the racist quota system that limited the numbers of individuals who could be admitted from a given country and completed a process begun after World War II of eliminating special restrictions on Asian immigration. “It was very much a piece of the civil rights legislation of 1964 and 1965,” Ngai said, but it replaced the old proportional quota system with one that allocated the same fixed number—20,000—of immigrants from any one country, regardless of its population. For the first time, the restrictions encompassed the Western Hemisphere countries, including Mexico.

Ngai noted that legal Mexican immigration in the years preceding the policy change had been about 200,000 per year, and the radical reduction in numbers was clearly a recipe for trouble. “What that means is that Belgium has the same quota as Mexico, New Zealand has the same quota as India,” she pointed out, adding that only four countries fill their quotas every year: Mexico, India, China, and the Philippines. This means that when individuals from those countries are told to “go back to the end of the line,” the line may in fact be interminable. She observed that a 1990 increase in the total number of immigrants from each country merely continued the imbalance, adding that the approach set by the Immigration Reform and Control Act of 1986, legalizing those already here and putting mechanisms in place to prevent any future unlawful immigration, has been equally problematic. Ngai suggested that Congress look back to Senator Phil Hart’s original proposal, which took into account the population of the sending country.

The briefing will be televised on C-SPAN’s American History TV and can be viewed now on the AHA's YouTube channel.