The National Archives and Records Administration (NARA) recently held its annual Preservation EXPOsed! event in Washington, DC, highlighting a diverse slate of preservation specialists and topics. The event, which archivist of the United States David S. Ferriero introduced, was made up of three elements: short talks given by conservation professionals about their work; exhibits and displays about the conservation of important documents at NARA such as the Declaration of Independence; and tables staffed by conservation and preservation specialists dedicated to different media, including books, paper, film and video, digital artifacts, photographs, and others. Members of the public could engage the specialists in several ways: from casual conversations to prescheduled appointments for evaluation of personal artifacts and recommendations on their preservation.

The conservation talks, held in the McGowan Theater, were interesting to both the nonspecialists and the NARA staff, many of whom were in attendance to learn more about what others in the organization were doing. Talks on topics such as the late 18th-century method of "locking" important documents allowed the audience to both observe how embedded physical evidence is collected for conservation, and to attempt to unlock sample "locked" letters themselves (not so easy, it turns out). Other talks included one on the science behind the a forged date on an important Lincoln document, in which conservationists tried to determine whether the manuscript could be restored to its original state (it could not), how sustainability is affecting conservation at NARA facilities, salvaging code books from a WWII shipwreck, and the preservation challenges facing a cache of 2,700 instructional films donated by the US military, among others. As part of the film preservation talk, audience members were treated to an exclusive viewing of How to Succeed with Brunettes, a short etiquette film produced for soldiers from 1967. 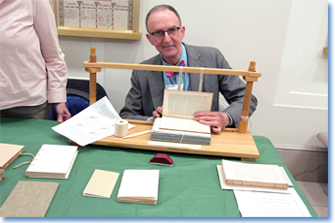 Out in the hallway, tables were lined up and staffed by preservation and conservation teams, and visitors could handle materials and tools and talk with the approachable professionals about their work in various mediums. School groups and tourists came through, but the event, which was held in the middle of a work day, really merited the high-volume crowds that PBS's better-known Antiques Roadshow attracts. Although staff members were not trained to assess value the wayRoadshow's are, it was an excellent opportunity for the public to have an intimate look at how these highly trained specialists pursue their vocation and the preservation work public tax dollars fund every day.

The recent budget sequestration has caused some handwringing in the press, but it is in the federal sector where historians are most likely to feel the impact. At institutions such as the National Archives that both employ and serve historians, the recent reduction in research hours, for example, is likely to be felt immediately, particularly as it has gone into effect during the busy summer tourist season. NARA's calendar of special programs that are of interest to historians and the general public are also affected, though it is too soon to tell how much.

Given the recent sequestration cuts to the National Archives, one participant suggested that it was fortunate to even hold the event at all, and noted that a similar public event scheduled in the future had already been cancelled. Chris Isleib, director of communications for the National Archives, acknowledged the difficulties in an e-mail: "Much of the required sequestration cuts will be taken from administrative and support costs, and they will have a program impact: slowing public access to records, reducing exhibits and public programs, and limiting the amount of permanently valuable records that NARA can accept from other agencies." Despite these challenges, Isleib maintains that NARA will continue its high level of services to the public, and hopefully programs like Preservation EXPOsed! will get the audience they deserve next year.