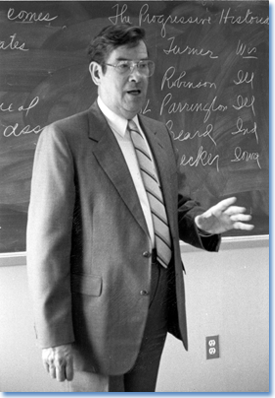 Charles H. Glatfelter, Franklin Professor of History emeritus and former chair of the history department at Gettysburg College, died on February 6, 2013, after a short illness. He was 88 years old. Glatfelter was predeceased in 2010 by wife Miriam Krebs Glatfelter. He is survived by his children, Christina and Philip.

Born on May 11, 1924, in Glen Rock, York County, Pennsylvania, Glatfelter began researching history in the York County Historical Society (now York Heritage Trust) collections as a secondary school student. Glatfelter entered Gettysburg College in 1941. After several failed efforts to enter military service due to a minor heart defect, he continued his studies and graduated as class valedictorian in 1946.

That same year he entered the Johns Hopkins University, from which he earned a PhD in 1952. At Hopkins, classes with Sidney Painter and C. Vann Woodward were particularly meaningful. Glatfelter completed his doctoral dissertation on German Lutheran and Reformed clergy in the Pennsylvania field under Charles Barker.

Glatfelter pursued an active scholarly agenda despite his heavy teaching load and service as dean of the college from 1960 to 1966. Although keenly interested in public affairs, and possessing an extraordinary grasp of the facts about American presidents and presidencies, his main contributions centered on education, social, and religious history.

Glatfelter's knowledge was encyclopedic when it came to Adams and York Counties. Throughout his active teaching career (1949-89) and well beyond, he produced a stream of scholarly and popular articles on local history topics, published as newspaper essays, magazine articles, pamphlets, scholarly monographs, and books. His short history of the Pennsylvania Germans, The Pennsylvania Germans: A Brief Account of Their Influence on Pennsylvania, appeared in the Pennsylvania Historical Association's History Studies series. It is still in print.

Within this corpus, one must take account of the robust two-volume histories published in the 1980s. The first was an authoritative history of the college: A Salutary Influence: Gettysburg College, 1832-1985. It is on his substantially revised and expanded doctoral dissertation, Pastors and People: German Lutheran and Reformed Churches in the Pennsylvania Field, 1717-1793 (1980-81), that Glatfelter's scholarly reputation will primarily rest. In these volumes, Glatfelter assembled biographies of 250 Lutheran and Reformed pastors, the histories of more than 500 congregations, and a narrative that ranged from the origins of the two churches to their establishment as independent organizations.

Reviewers found Pastors and People remarkable for its both exhaustive sourcing and sound arguments. Writing in Pennsylvania History, James Tanis called the work "monumental," adding that for students of Pennsylvania history, it deserved place on a shelf "with a small group of essential studies." Tanis went further, noting that Glatfelter's books "will long remain a central reference volume for anyone interested in colonial life in the Middle Colonies and in 18th-century Protestantism, both in America and abroad.

"In addition to his scholarly contributions, Glatfelter was active in professional organizations relating to Lutheran history, Pennsylvania Germans, and Pennsylvania history, generally. He was a director of the Pennsylvania German Society from 1976 to 1988 and served as an editorial advisor to the publications program for many years. Glatfelter held various offices on the council of the Pennsylvania Historical Association (PHA), which he had joined as a college student in the early 1940s. In a reflection piece for the 75th anniversary issue of Pennsylvania History, John Frantz of the Pennsylvania State University called Glatfelter one of the "Alexander Hamiltons" of the PHA for his work putting the association's finances on a sound footing. Glatfelter also served a term (1986-88) as president of the association.Glatfelter's influence was felt at Gettysburg College on various fronts, first and foremost through his teaching. His high standards and willingness to go the extra mile to help students reach their potential was legendary. Known for its rigor, his historical methods course influenced generations of students, a number of whom went on to earn a doctorates in history and enjoyed successful careers in academe and cognate fields.

Aside from his labors as dean and department chair, Glatfelter chaired virtually every important committee at the college. He was called on by a series of presidents for counsel and remained willing to meet classes or individual students to discuss local history well into his 80s. In 1987, he received the Lindback Foundation Award for Distinguished Teaching.

Although he was a much-admired member of the Gettysburg College community, Glatfelter's passion for local history found its greatest and most satisfying outlet in his work at the Adams County Historical Society, where he served as an unpaid executive director from 1959 until 2001. At the historical society, Glatfelter was fully in his element. He organized and grew the collections, wrote memos guiding future researchers, jointly authored studies on everything from church history to land warrants, and answered innumerable reference questions.

Teacher, scholar, archivist, public historian, lay churchman, and mentor to many, Charles Glatfelter lived an exemplary life. It is pleasing to note that only weeks before the onset of his final illness he was wheeled through the construction site of the new Seminary Ridge Civil War Museum in the very building where he had served as director of the Adams County Historical Society. Thanks to a million dollar gift by local physician and historian Dr. Bradley Hoch, the first floor of that museum will be called the Charles H. Glatfelter Welcome Center. Charles Glatfelter could have asked for no more apt or satisfying memorialization.