In the March Issue of the American Historical Review

The March 2022 issue of the AHR brings a completely new look to the journal in what marks its first major redesign in 50 years. Readers will see a variety of changes in the print journal and its digital platforms, including a new cover design; new typography; a refresh of our website and social media platforms; the launch of a rebranded and expanded podcast, History in Focus; and a fundamental reconceptualization of how we present articles and reviews. 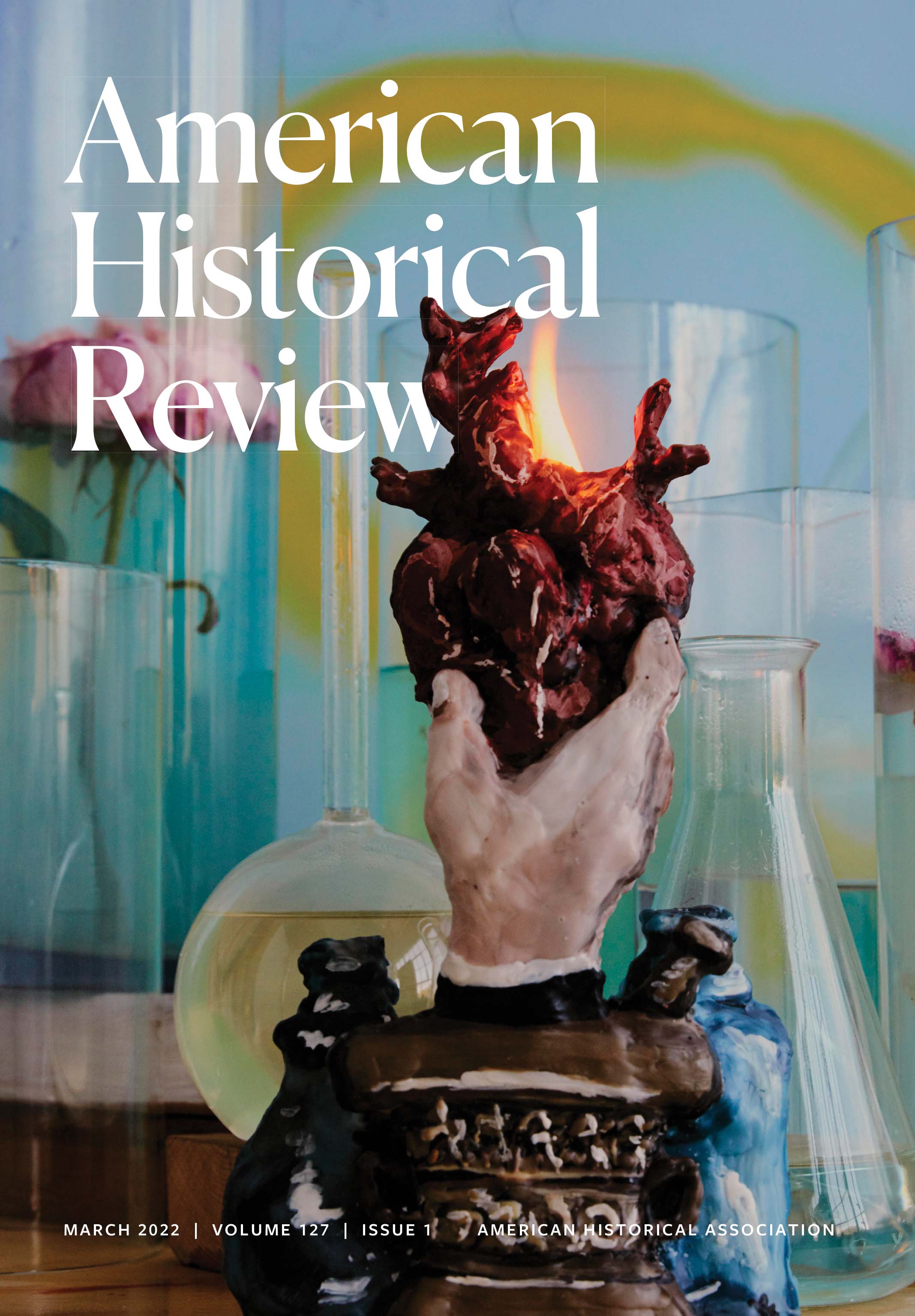 The Embalming of William of Orange is a wax representation created by candlemaker Janie Korn of a 2018 exhibition at the Historisch Museum Den Briel. When William the Silent, Prince of Orange, was killed in 1584, the court physician embalmed his body on the day of his death and aimed to preserve it for eight to ten years. The exhibition’s curators invited Caro Verbeek, an art historian and curator, to reconstruct the historical smells of the embalming, which included notes of myrrh, oregano, sage, olibanum, styrax, benzoe, lavender, thyme, rosemary, iris, rose, and musk. Verbeek is a member of the Odeuropa team, whose work on the history of smell is introduced in the inaugural AHR History Lab. Photograph courtesy of the New York Times.

Most notably, this redesign establishes the AHR History Lab, a new experimental space in the middle of the journal. The lab is driven by a single question: How can the AHR help reimagine the practice of history in the 21st century? This space will provide a highly visible site to rethink historical content, form, and method. Over the next five years, the lab will invite teams to develop projects around pressing historical issues that make original interventions into research and teaching while at the same time speak to expansive audiences. Projects will involve practitioners of history from across the discipline, including academics, teachers, digital humanists, archivists, community activists, museum curators, documentarians and filmmakers, writers, poets, musicians, composers, and visual artists. Their results will appear in the pages of the AHR and in new digital platforms designed to reach wider audiences. The History Lab is intended to open up the pages of the journal and the discipline to the diverse work of practicing historians today.

This issue will be the first to include the lab, presenting two projects at the cutting edge of the discipline. William Tullett (Anglia Ruskin Univ. Cambridge) and Inger Leemans (Vrije Univ. Amsterdam) lead an expansive interdisciplinary conversation on approaches and methods in smell history, part of the lab’s yearlong project on historical smells with the Odeuropa research group. Gathering historians, chemists, curators, and digital humanists with expertise in sensory mining and olfactory heritage, Odeuropa aims to develop novel methods for collecting data about historical smells from text and image collections and to foster their dissemination through olfactory research and public exhibitions. Additionally, the lab showcases a forum curated by Michael Goebel (Freie Univ. Berlin) that brings together 12 historians who draw on their own areas of specialization to rethink how we conceptualize the history of nationalism in our present moment of reactivated and often militant nationalist rhetoric.

The lab is also the new home for the AHR’s popular History Unclassified feature. In March, we include two essays about discoveries and dead ends in the archives. In “The Book as Archive,” Alex Hidalgo (Texas Christian Univ.) shares his research into a handwritten account of a stillbirth of conjoined twins in 18th-century Mexico that was stitched into a book of natural history. Hidalgo uses this material to contemplate how curatorial acts challenge our ideas about archives, the materiality of books, and the preservation of memory. Jennifer Lambe’s (Brown Univ.) “Christine Jorgensen in Cuba: On Dormant Leads and Archival Dead Ends” demonstrates how apparent archival dead ends can lead to new questions, actors, and subjects through the story of the world’s first transgender celebrity and her performances in 1950s Havana.

In addition to the new History Lab, the AHR redesign changes how the journal presents book reviews. Some of these changes are simple. For example, the “Reviews of Books” is now simply “Reviews.” Others are more radical. While the journal will continue to publish book reviews, it will also regularly review other forms of historical scholarship, including digital humanities projects, exhibitions, and podcasts, as well as films, television, and literature.

How can the AHR help reimagine the practice of history in the 21st century?

Finally, the AHR is launching an expanded Featured Reviews section that will be guided by these new selection criteria. The March 2022 issue includes a set of reviews about history podcasts introduced by Daniel Story (Univ. of California, Santa Cruz), the host of the new AHR podcast History in Focus. Christopher Goscha (Univ. of Montreal) and Shawn McHale (George Washington Univ.) review each other’s recent monographs; both books address the same foundational moment in postcolonial Vietnamese history from very different perspectives.

The scholarly articles section of the journal remains unchanged. It begins with the AHA presidential address by Jacqueline Jones (Univ. of Texas at Austin). Her address, “Historians and Their Publics, Then and Now,” looks at past presidential addresses to highlight the AHA leadership’s persistent concerns about the future of the profession. At the same time, she captures silences around questions of gender, ethnicity, and race and the ways in which they have distorted our understanding of the past. Jones concludes with a discussion of the public-facing turn in history practice today and the role of historians’ advocacy in it.

The issue’s seven articles open by examining war and dispossession. Judd Kinzley’s (Univ. of Wisconsin–Madison) “Wartime Dollars and the Crowning of China’s Hog-Bristle King: The Dubious Legacies of US Aid, 1938–49” explores how US wartime procurement programs for unusual raw materials like hog bristles created powerful transnational businesses with lasting links to both government and US markets. Next, in “Fiduciary Colonialism: Annuities and Native Dispossession in the Early United States,” Emilie Connolly (Brandeis Univ.) studies annuities and trust funds established by federal authorities as a critical, understudied feature of Native dispossession in the early United States, focusing on how Native people tried to shape the terms of these fiduciary arrangements.

These pieces are followed by two articles on the history of gender and sexuality. In “‘Do You Call Yourself a White Man?’ Nationalism, Criminalization of Interracial Sex, and the Policing of White Male (Hetero)sexuality in South Africa during Apartheid,” Susanne M. Klausen (Penn State Univ.) analyzes the criminalization of interracial extramarital sex through South Africa’s Immorality Act of 1950 to offer new perspectives on the connections between sexual regulation and racial order. Tamar Herzig’s (Tel-Aviv Univ.) “Slavery and Interethnic Sexual Violence: A Multiple-Perpetrator Rape in Seventeenth-Century Livorno” utilizes a transnational and gendered lens to analyze the public, state-sanctioned rape of enslaved female Jews by Muslim and Catholic men to complicate historiographic notions of early modern religious pluralism and interethnic relations.

Three final articles explore the influence of shifting politics and environments on questions of mobility. Cian T. McMahon’s (Univ. of Nevada, Las Vegas) “‘That City Afloat’: Maritime Dimensions of Ireland’s Great Famine Migration” offers a social history of 19th-century Irish migrant experiences aboard ships and how they influenced community solidarity within the Irish diaspora. In “Blood and Bone, Tears and Oil: Climate Change, Whaling, and Conflict in the Seventeenth-Century Arctic,” Dagomar Degroot (Georgetown Univ.) examines the expansion and contraction of ice in the early modern Arctic and the behavioral patterns of polar bears and whales to interweave a discussion of climate and economic history with the animal turn in history. Finally, Samuel Dolbee’s (Harvard Univ.) “Empire on the Edge: Desert, Nomads, and the Making of Ottoman Provincial Borders” offers an intervention in emerging environmental histories of borderlands by exploring the intersection of politics and the environment in the late 19th-century Ottoman Empire.