In the March Issue of the American Historical Review

Fittingly enough, volume 126 of the American Historical Review opens with a plea for “slow history,” 2020 AHA President Mary Lindemann’s (Univ. of Miami) entreaty for taking a deep breath “to consider what benefits going slow offers to research, writing, and instruction.” The March issue of the AHR offers just that opportunity. That’s because in 2021 we shift from our previous breakneck pace of publishing five issues a year to a much more manageable four. Yet, doing so means each issue will contain more material, giving readers an opportunity to take their time in perusing the contents. In addition to Lindemann’s AHA presidential address, the March issue features five full-length articles, two History Unclassified essays, reviews of video games and films, and a review roundtable on the history of Islam. 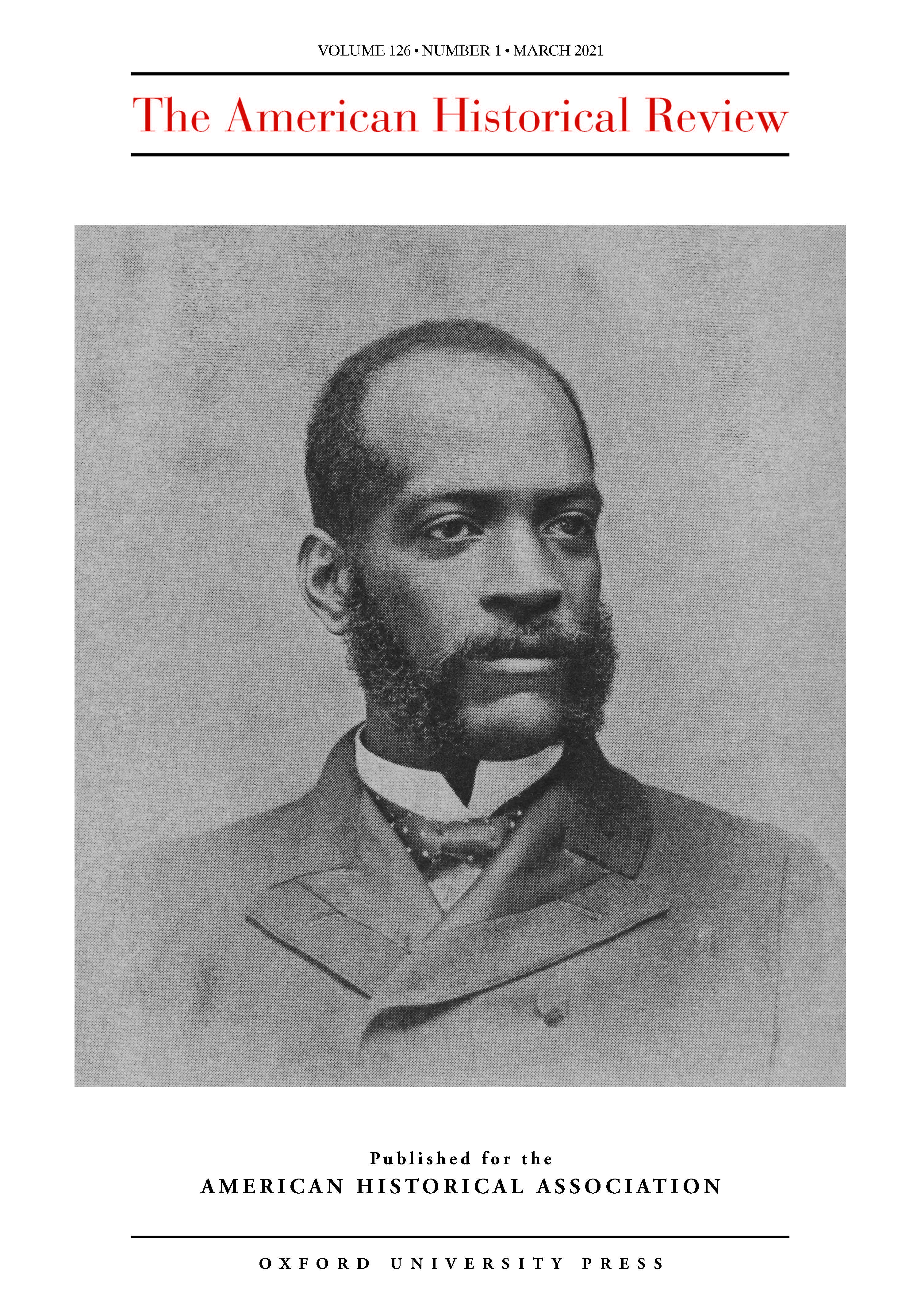 Before returning to Havana in 1902, where he eventually won a seat in the Cuban House of Representatives, cigar maker, journalist, and politician Rafael Serra lived in New York City for nearly two decades. He was one of the architects of the ideal of a republic for all that came to be associated with his close political ally, the poet and journalist José Martí. With this photograph, published in 1896, Serra ensured that the Afro-Latinx New Yorkers who played such a central role in the evolution of Cuban nationalism would not be completely erased from the historical record of their movement. In “Cuban Racial Politics in Nineteenth-Century New York: A Critical Digital Approach,” Jesse Hoffnung-Garskof uses digital tools to explore the experiences of Black Cuban migrants in the Gilded Age city. Photograph of Rafael Serra courtesy of the Schomburg Center for Research in Black Culture, Manuscripts, Archives and Rare Books Division, New York Public Library.

The articles run the gamut from the material culture of the Renaissance to the sounds and smells of the Russian Revolution. In “Befeathering the European: The Matter of Feathers in the Material Renaissance,” Ulinka Rublack (Cambridge Univ.) considers the emergence and significance of cross-cultural objects in the context of trans-Atlantic cultural exchange. Her article charts the spectacular rise in importance of feathers in dress during the Renaissance, their relation to collecting practices, and their material relevance well into the 17th century. Rublack argues that the meanings of feather-work in Europe were influenced by encounters with the Americas, whose artistry 16th-century Europeans greatly admired. The article offers an alternative to accounts that present this era of early conspicuous consumption solely as a means to celebrate the prestige of rich patrons and instead inquires into how material culture might interact with human perception and the mind.

In another essay about the transmission of culture across boundaries, Iris Idelson-Shein (Ben-Gurion Univ.) discusses the corpus of translations of non-Jewish texts into Hebrew during the early modern period. Her article, “Rabbis of the (Scientific) Revolution: Revealing the Hidden Corpus of Early Modern Translations Produced by Jewish Religious Thinkers,” argues that such translations suited the combination of attraction and anxiety with which many members of the Jewish religious elite observed the cultural developments of the early modern period. Anxious about the potential hazards entailed in direct exposure to non-Jewish texts and ideas, Jewish translators became cultural gatekeepers of non-Jewish worldviews. Idelson-Shein shows how they mistranslated both deliberately and accidentally, added and omitted, giving new meanings to non-Jewish works and concepts, and harnessing their sources to meet their own unique agendas as they confronted new, secular ideas.

A third article traverses more modern transnational terrain. In “Cuban Racial Politics in Nineteenth-Century New York: A Critical Digital Approach,” Jesse Hoffnung-Garskof (Univ. of Michigan) reappraises the racial politics of the 19th-century Cuban independence struggle in exile through an analysis of the experience of Rafael Serra and other Afro-Cuban activists in New York City. Serra (featured on the issue’s cover) led a community of Afro-descended Cuban migrants to the city that worked with José Martí to create the multiracial Cuban Revolutionary Party. Hoffnung-Garskof makes use of digital tools for network visualization and mapping to illustrate the evidence of race-based, class-based, and nationalist social networks among Serra’s constituents. These networks, he shows, facilitated a range of political strategies and alliances, including cooperation with African Americans. In presenting the digital evidence, Hoffnung-Garskof also offers a critical appraisal of the digital methods, tools, and labor arrangements made possible by these research techniques.

Feathers, ideas, politics . . . and mold. In “Mold’s Dominion: Science, Empire, and Capitalism in a Globalizing World,” Gerard Sasges (National Univ. of Singapore) traces the scientific discoveries in fermentation that transformed early 20th-century food-processing technology across the globe, especially in the production of alcohol. Focusing on the careers of a pair of biochemists, Albert Calmette and Jōkichi Takamine, Sasges shows how their distinctive experiments with mold were remade by, and in turn helped to remake, the political economies they encountered in colonial Indochina and the Progressive Era United States, respectively. Understanding how a single technology could take on two radically different forms allows Sasges to explore how empires and capitalist enterprises combined to send mold along pathways that both reflected and transcended imperial boundaries.

The final article in the March issue returns our focus to a singular event in one country, namely the 1917 Russian Revolution. In “Sounds of February, Smells of October: The Russian Revolution as Sensory Experience,” Jan Plamper (Goldsmiths, Univ. of London) offers a novel approach to this monumental upheaval, insisting on the significance of its sensory elements—the sound of gunshots from unusual places, the smell of burnt police files, the stench of the crowded Smolny Institute where the Bolsheviks plotted their next moves. Using a wide array of diaries and memoirs, Plamper tracks in detail how people of various backgrounds expressed a new experience of time in a sensory idiom, and how they ultimately became habituated to the new sounds and sights that characterized the revolutionary moment as a world-historic event. Moving beyond the dichotomy of discourse vs. “raw” experience, Plamper, a historian of emotions, conjoins the histories of experience, the senses, and affect as an integrated, simultaneous sensory-emotional-cognitive process recognized even at the time by the avant-garde artists who were contemporaries of the Russian Revolution.

The extra room afforded by the slow(ed) production pace allows the AHR to supplement these articles with other material. The March issue includes a pair of History Unclassified essays. One, by José Ragas (Pontificia Univ. Católica de Chile), examines the multiple efforts developed by scholars to document the vast repertoire of ephemera—graffiti, signs, flags, testimonies—generated during the massive Chilean street protests of October 2019. The other, by Andrew Denning (Univ. of Kansas), explores the role historically themed video games have in popular understandings of history, and how they might be used by scholars in teaching and research. Denning’s essay is accompanied by three reviews of video games in the popular Assassin’s Creed series. The issue also includes six reviews of films of interest to historians, both fiction and documentary, dealing with issues of race, ethnicity, labor, and popular radicalism.

Finally, the March issue includes an innovative feature, a “review roundtable” in which seven scholars of Islamic history offer their assessments of The Wiley Blackwell History of Islam, followed by a response from Armando Salvatore (McGill Univ.), one of the volume’s editors. Subscribers will have a full three months to work their way through all this material before the June issue, so they needn’t rush.