Continuing the Careers Conversation: The Malleable PhD Sessions at AHA 2014

Two and a half years ago, AHA Executive Director Jim Grossman and then-AHA president Anthony Grafton issued a challenge to the historical profession in an essay titled “No More Plan B: A Very Modest Proposal for Graduate Programs in History” (Perspectives on History, October 2011). The authors called for historians to abandon the idea that for graduate students, careers beyond the professoriate of necessity represented a mere afterthought—an unappealing alternative that appeared on the horizon only when an academic position was not in the offing.

The effort by Grossman and Grafton to promote the “malleable PhD” stemmed from several factors. Graduate programs are producing more historians than the academy can absorb in highly coveted tenure-track jobs. Moreover, some graduate students discover that they do not want to pursue a career in academia in any case; their interests lie in areas other than research and teaching. Grossman and Grafton contrasted the richness and vitality of the current historical enterprise with the narrow employment options that traditional graduate programs presented to their students. They wrote, “This breadth and range, this openness to new ways of thinking and working, somehow disappear when we consider our students’ careers. We don’t tell them on that first day, ‘There are many ways to be a historian; there are many ways to apply what you’ve learned to a career.’ This matters for two reasons, not necessarily in any order. First, it ignores the facts of academic employment; second, it pushes talented scholars into narrow channels, and makes it less likely that they will take schooled historical thinking with them into a wide range of employment sectors.” 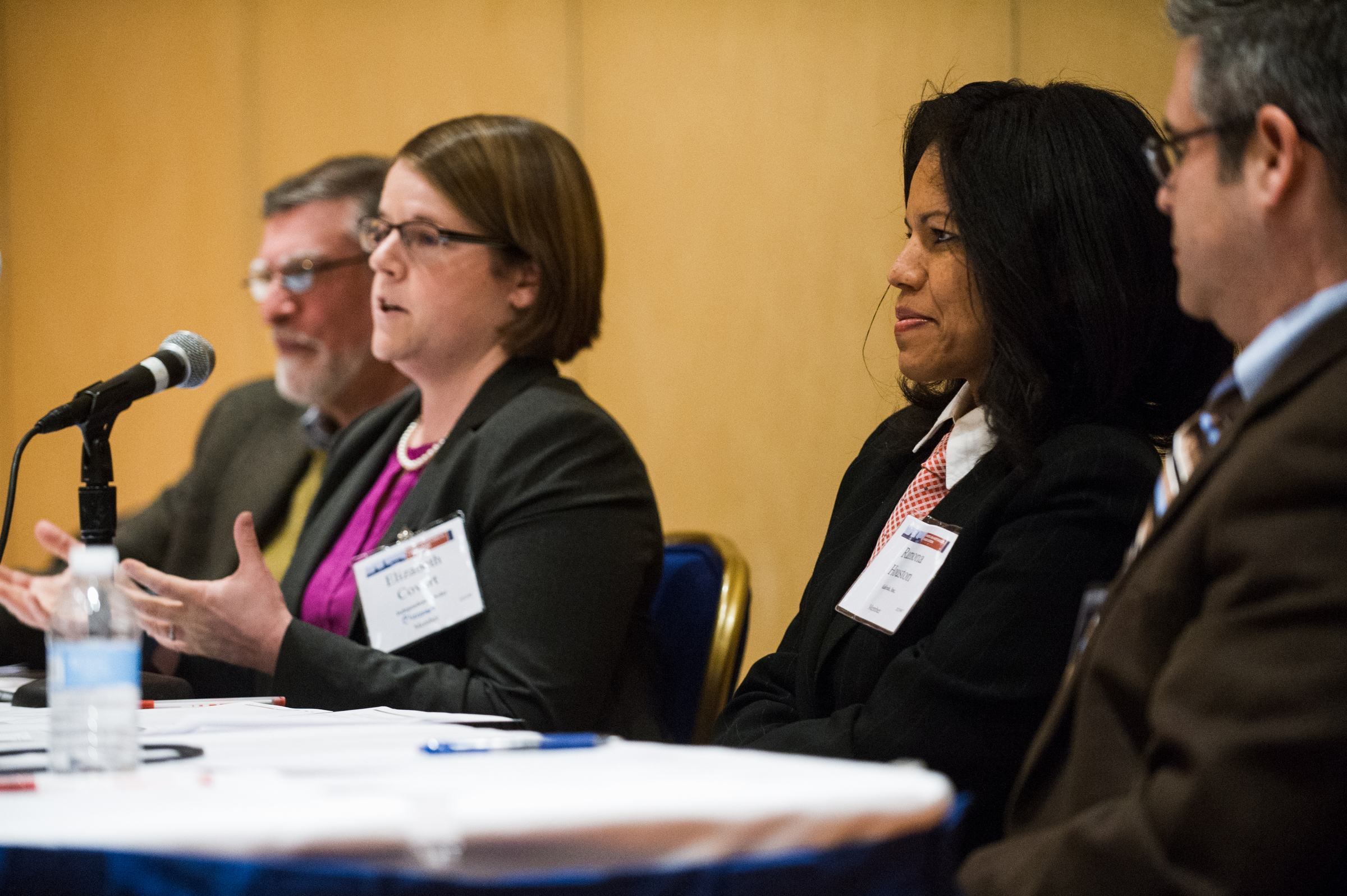 The 2014 annual meeting of the AHA provides evidence that an ensuing conversation about the malleable PhD has transformed the way we talk and think about a whole range of issues—graduate education, the kinds of jobs historians are prepared to fill, departmental cultures, even the nature and needs of American society in general. A Friday morning panel titled “Finding and Loving a Government Job, Part Deux” (a continuation of a discussion started at a workshop at the annual meeting the year before) attracted a standing-room-only crowd eager to hear firsthand accounts of historians working in congressional offices, the US Army Center of Military History, the Office of the Secretary of Defense, and the US State Department. John A. Lawrence, a congressional staff member for forty years (most recently former chief of staff to Nancy Pelosi, the lead Democrat in the House of Representatives) suggested that “much of contemporary political discourse reveals an appalling lack of historical understanding” and issued a call for more history PhDs to pursue jobs at all levels of government.

A Saturday afternoon session, “Getting to the Malleable PhD,” featured panelists who were filling or had filled myriad roles as stakeholders in this conversation—graduate student, faculty adviser, director of graduate studies, department chair, and academic dean, as well as “post-acs” (people who entered the academy but have left it) and “alt-acs” (people who pursue academic careers that aren’t professorial, on campus or outside the academy). The audience heard from a public-policy maker and founder of a consulting firm, an independent scholar, and a public historian. The interviewing workshop, a fixture at the annual meeting that provides a chance for “interviewees” to speak to “interviewers,” included not only faculty representing large research universities, small liberal arts colleges, and community colleges, but also a historian representing a fundraiser for a nonprofit, an entrepreneur, a digital humanities public-historian, and archivists and librarians, among others.

Two roundtables on Saturday focused on how PhD programs had prepared—and in some cases failed to prepare—the panelists for careers in museums. Presenters affirmed the value of traditional graduate seminars, which teach students to do research and to read and synthesize a great deal of material. At the same time they agreed that they would have found helpful classes in subjects useful to a wide variety of pursuits, including project management, staff reviewing, audience research, and budgeting. They lamented that their graduate education did not prepare them to work collaboratively with their classmates; instead, traditional programs glorify the solo operator, the individual toiling away alone in the library. Certainly many forms of employment--outside the academy but also within it--demand that people work together on committees or on research projects, work that relies on cooperating within a group.

The Grossman-Grafton essay might have jump-started a national conversation about the malleable PhD, but it did not invent it. At the meeting in Washington, Robert B. Townsend and Maren Wood reported on the results of their study “The Many Careers of History PhDs”; they found that one-quarter (24.2 percent) of the 2,500 historians who earned a degree between 1998 and 2009 were working in jobs other than those at two-year or four-year institutions of higher learning. Townsend and Wood also found that PhDs from elite institutions were just as likely to work outside the professoriate as graduates of nonelite institutions. The “No More Plan B” call to action was less the trumpeting of a new phenomenon and more a belated reaction to developments that have been unfolding in the profession (and presumably all of the humanities) for some time now.

Perhaps, then, the question is, How can the AHA promote national policies related to graduate curriculum and placement that alleviate the presumed isolation of the many graduate students who, for whatever reason, do not follow the traditional path into academia? This concern speaks to the so-called culture question—the notion that the vast majority of graduate programs devote the bulk of their human and financial resources to preparing students for the professoriate; presumably graduate faculty would resist efforts to revise their curricula and professional-development and placement strategies in light of current-day realties related to alternative careers for history PhDs. In December 2012, the AHA received a grant from the Andrew W. Mellon Foundation to explore ways to broaden the horizons of history PhDs. Leaders of that effort, called the Career Diversity Project, include Anthony Grafton, who serves as director; Robert Weisbuch, former president of the Woodrow Wilson National Fellowship Foundation, a senior adviser to the AHA; and the AHA’s coordinator, special projects, Julia Brookins, a University of Chicago history PhD, who serves as project director.

Certainly doubts linger about the efficacy of the malleable PhD initiative in all its iterations. At the “Getting to the Malleable PhD” session, panelists and members of the audience engaged in a spirited debate about whether academic administrators would have any incentive to institute measures that might threaten their National Research Council graduate-program rankings, which are based primarily on placements in tenure-track positions. Some people question whether the mere act of acknowledging diverse career paths for history PhDs constitutes an implicit denigration of traditional practices of PhD graduate programs, as well as an explicit warning to young would-be professors that they have little hope of landing a tenure-track job. Some argue that malleable-PhD talk will have the unfortunate effect of keeping alive graduate programs that do a poor job of preparing their students for any kinds of jobs, in academia or outside of it, programs that leave their students debt-ridden and demoralized at the end of their studies. And finally, the malleable PhD is dependent to a large degree on employers who appreciate historians’ skills and broad way of looking at the world.

At the end of the “Getting to the Malleable PhD” panel, Robert Weisbuch commented on the lively presentations made by the panelists following nonacademic career paths, and suggested, “The world needs more, not fewer history PhDs.” He said the academy should seek to increase the supply of citizens who can write well, think critically, understand historical antecedents, and evaluate different kinds of evidence in a nuanced and sophisticated way—and that those citizens should not be concentrated solely in academia but rather employed throughout the labor force in business, nonprofits, government, finance, and politics. No doubt discussion about the malleable PhD will continue, as individual historians tell their own stories of the career paths they have chosen, and as systematic efforts such as the Mellon Career Diversity Project help bring students, faculty, administrators, and employers into conversation with each other about all that a historian can be and do.

Jacqueline Jones, a former AHA vice president, Professional Division, is the Walter Prescott Webb Chair in History and Ideas and the Mastin Gentry White Professor of Southern History at the University of Texas at Austin. Her publications include Saving Savannah: The City and the Civil War and A Dreadful Deceit: The Myth of Race from the Colonial Era to Obama’s America.

As Jacqueline Jones notes in her coverage of the “Malleable PhD” sessions, one of the most important issues regarding the employment of history PhDs beyond the professoriate is what departments can and should be doing to prepare their students. Two recent articles in Perspectives pick up this topic:

Thomas Bender, “A Call for Reflection and Change, Again: The Education of Historians for the Twenty-First Century, Ten Years Later,” January 2014.

James Banner Jr., “The Preparation of Historians: Much More to Do,” February 2014.