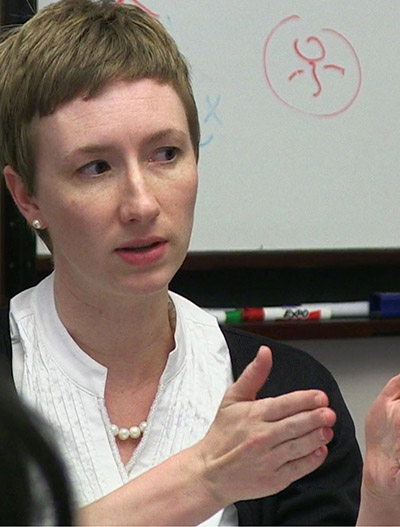 Kate Merkel-Hess is an assistant professor of history and Asian studies at Penn State University. She currently lives in State College, Pennsylvania, and has been a member of the AHA since 2002.

As a teenager, I was committed to studying piano. As a college student, I was focused on being a journalist, with an interest in global affairs. I was an East Asian studies major and so I was studying Chinese language and taking Chinese history classes with scholars like Valerie Hansen, Annping Chin, and Jonathan Spence. In my senior year, I took a seminar with John Lewis Gaddis on “Doing History.” That was the first time I thought about the broader discipline. The thrill I felt in studying and thinking about China and my excitement about the possibilities of history came together after that.

I’m at different stages with two projects. I’ve just completed the manuscript for my first book. It examines the Rural Reconstruction Movement, an effort by elites in China to modernize rural people from the 1920s through the 1940s. I argue that in crafting an agenda for rural reform, the movement generated a notion of a modernity that was situated in the villages, rather than the city.

I’m beginning work on my second book, which sits at the intersection of warlordism, communism, and gender in China in the 1930s and 1940s. I’ve been looking at women who were sympathetic to or affiliated with the Chinese Communist Party, but who were also related to Nationalist-affiliated “warlords,” the regional powerholders who governed China throughout this period. I’m thinking about the way that personal intimacy was utilized—both historically and in popular memory—to shape stories about political conversion, the power of communist ideas, and the centrality of women’s liberation to the CCP.

My thinking on several issues has broadened and deepened since graduate school. Being in the classroom more regularly means that I am motivated to consider how I can better translate what we do as historians into the curriculum. I have been challenged, in particular, in trying to think about what gets left out of the narratives that are encapsulated on syllabi and played out in lectures. This has been particularly salient in teaching world history, which can be such a dash through time, and thus has a tendency to collapse into a progressive narrative. On a related note, I have been involved in ongoing discussions about how digital resources and tools are changing how we do research and teach. I was thinking about some of those issues as a graduate student too, but not in the systemic and institutional way that I am now.

The Dissertation Reviews website is an incredible resource. It features constructive reviews of recently filed dissertations and so is really the best way on the web to learn about new research. My favorite parts of the site are “Fresh from the Archives,” which features write-ups of the ins and outs of foreign archives, and “Talking Shop,” which has run recent pieces on things like personal safety when conducting fieldwork and blogging about ongoing research.

ChinaFile is sponsored by the Asia Society and hosts a range of writing about China. I particularly recommend the “books” section, which features short interviews with authors of recent books on China, including many historical works.

Being a historian provides a lot of opportunities for outreach. Writing is one of those for me, and I have taken advantage of new media opportunities to write and publish in a range of venues. But the one I value most, and which stimulates intellectual exploration in ways that can keep one productively off-balance, is being in the classroom. There are, of course, different registers in the classroom, and I enjoy them all—big lecture courses provide a different setting for reflection and inquiry than do small undergraduate seminars, and those are different still from graduate courses. In all those settings, learning to reach out to the many kinds of students one encounters at a big land-grant institution is a challenge that I feel really matters.

I received the very good advice that being part of AHA would aid my integration into the discipline. In recent years, though, my AHA membership has served me in another way too. My own research has remained focused largely on historical topics and questions centered in China, but a lot of my graduate training was in world history. Being part of the AHA—having the AHR land on my desk every few months, attending a range of panels at the annual meeting—those things help to remind me of the bigger tent that we are all in, and keeps me engaged in the debates and themes that are beyond my own window on the discipline.

I don’t have a single anecdote, but at this year’s meeting I experienced the transition from job seeker (which I was when I last attended the annual meeting, in 2010) to junior faculty member. One of my responsibilities at Penn State has been to oversee the history department’s job preparation and “professionalization” work with graduate students, and so I attended the meeting this year in that role, providing support and feedback to the students from our department who were interviewing for jobs. Experiencing the increasingly competitive job market once again through the eyes of current and recent PhDs affirmed for me that graduate programs have a responsibility to robustly prepare students for academia and beyond.

I can’t imagine a better job. I feel fortunate every day to wake up and do the work I do. And it seems to me that it’s a critical and exciting time to be a historian, as the methods and modes of our work shift. I’m so pleased to be a part of that endeavor.