In situations of protracted crisis—and I would place the current academic job market in that category—it can be useful to learn about the coping strategies of others. Even if the particularities of someone else’s strategy make it utterly inapplicable to oneself, merely contemplating an alternate approach can jostle the mind and encourage thinking outside the box. It can supply the new slant that helps to turn a perceived dead end into a relatively open horizon. Information and anecdote can, in other words, be salutary. It is in this spirit that I decided to devote a column to the case of people close to me: my stepdaughter, Jessica Sewell, and her husband, Andrew Johnston. A recent trip to China to visit them and their seven-year-old son, Ben, gave me the opportunity both to travel to China for the first time and, more important in this context, to see the way of life they are carving out for themselves through a bold response to the job crisis. I was heartened by what I saw.

Jessica and Andy both hold doctorates in architectural history from the Department of Architecture at UC Berkeley. As a two-career couple with a young child, their commitment to living in the same place led them to apply for and then accept tenured associate professorships at a new university in Suzhou, China, that is run jointly by Xi’an Jiaotong University and the University of Liverpool. They moved to Suzhou, in the eastern part of the country about an hour’s drive from Shanghai, in the summer of 2012. Neither of them speaks Chinese or had previously gravitated to China as an object of study, but China is of professional interest to them as the country where the largest amount of the world’s new construction will take place in the next few decades. It is also, consequently, a country that has begun to send a very large number of students to the United States for training in architecture. Jessica and Andy don’t envision staying in China indefinitely. Rather, they have opted for a family adventure and taken a very calculated professional gamble. They’re wagering that the experience of living in China will not only be personally broadening but that an in-depth acquaintance with the Chinese system of higher education will better equip them to find at home the kind of positions that they are seeking. 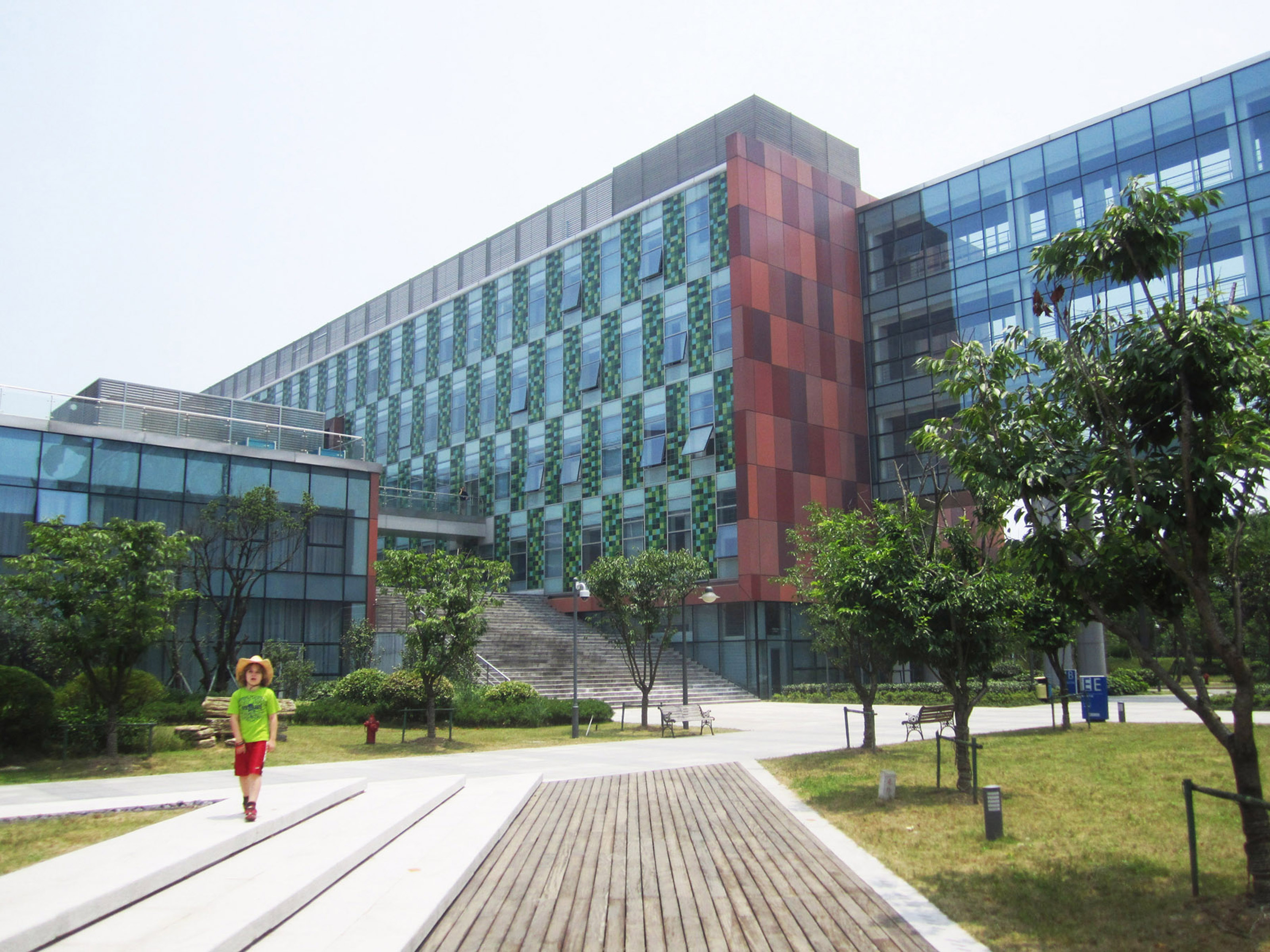 It is the status of English as lingua franca that makes the whole venture possible. The language of instruction at Xi’an Jiaotong Liverpool University (XJTLU) is English, and the student body, recruited largely in China but also in Taiwan and elsewhere, arrives proficient. The very international faculty—a mixture of Asians, Europeans, North and South Americans, and Australians—also have English as their common language. Hence faculty members need only English for purposes of work and to establish informal relationships with their colleagues outside of work. XJTLU provides its faculty with rudimentary training in Chinese as well, but it is possible to get around a medium-sized city like Suzhou (which in the supersized metrics of contemporary China means a population of 5 or 6 million) using only English. Most shopkeepers have enough English to make transactions; taxi drivers—taxis are plentiful and inexpensive—can be instructed by means of names and addresses presented bilingually on smartphone screens or on prepared “taxi cards”; the city has constructed the first two lines of what will eventually be an inclusive subway network. Obviously one would prefer to navigate Suzhou in Chinese, but in a pinch one can make do as an Anglophone.

The Chinese are eager to recruit foreign faculty in those fields, like architecture, in which the long-term effect of the Maoist Cultural Revolution was to leave them, in the second decade of the 21st century, without a pool of native mid-career professionals. People like Jessica and Andy and many of their colleagues at XJTLU are thus, in effect, substitutes for China’s own missing generation. To facilitate the recruitment of such people, the Chinese government offers favorable terms of employment on a country-by-country basis: US nationals, for example, are permitted to work in China for three years without paying taxes. XJTLU adds other favorable terms to the mix. For faculty at Jessica and Andy’s level, an important carrot is a subsidy either for housing or for a child’s education; in a two-career family like Jessica and Andy’s, each member of the couple can claim one of the subsidies. The result for the Sewell-Johnstons is an eminently affordable apartment of some 2,000 square feet in a new, air-conditioned tower whose grounds include an outdoor swimming pool. Their son, a denizen of that swimming pool (he was the last person out of the water on the day of its annual closing), attends a private English-language international school where class size is about half that of an American public elementary school. The apartment tower, Ben’s school, and Jessica and Andy’s university are all located, together with several other universities, in Suzhou Industrial Park, a sprawling new district of Suzhou created over the past decade on land formerly occupied by farms. The Sewell-Johnston family are very much participants in the meteoric rise of a new urban China, experiencing that historical moment firsthand.

Suzhou and its location within China have much to recommend them. The old city at Suzhou’s core has been a center of commerce since the 10th century and is famous for its canals, covered bridges, and especially its collection of exquisite classical landscape gardens whose names (“Humble Administrator,” “Master of the Nets”) evoke their creation by the mandarin bureaucratic officials who figure so prominently in Max Weber’s sociological theory. The old and the new China thus stand side by side in Suzhou. Furthermore, readily accessible from Suzhou is Shanghai, which, with a population of some 23 million, supplies a bracing dose of unbridled cosmopolitanism. Visiting it for the first time in the company of the Sewell-Johnstons, who already knew its contours, I was surprised that in terms of sheer scale and energy, and with its riverfront, its skyscrapers, and its quarters featuring Western-style architecture of 1920s and 1930s vintage, it reminded me more of New York than any other place I’d ever been. I found myself seduced by this hint of familiarity in so unfamiliar a metropolis. I wished I could stay longer and explore Shanghai—and regarded Jessica and Andy’s geographical proximity to it as a measure of good fortune.

It was in fact the energy that I observed all around me during my brief, ten-day visit to China that formed my dominant impression of the country. Many people on the streets of Suzhou and Shanghai, or on the brand-new subway line going from Suzhou Industrial Park to the city’s Times Square (its real name) on a Saturday night, seemed palpably happy and optimistic, much in contrast to the mood of the people I am accustomed to seeing on the streets and public transportation of Chicago and Paris. In particular, people in large stores—I am thinking of an upscale supermarket-cum-toiletry store in Suzhou’s Times Square—looked to be in the first, hopeful blush of infatuation with consumer goods, a state of mind no longer available to Americans. Even if I suspected, as a jaded Westerner, that their infatuation would sooner or later meet a bad end, I couldn’t escape the feeling that the 21st century was “happening” in China rather more than in those places I typically inhabit.

I don’t want to romanticize relocating to China as a way of finding satisfactory academic employment in an anemic job market. Nor do I want to suggest that going halfway around the world is feasible, either temperamentally or in practical terms, for everyone. But, at least in this case, it has proven more feasible than I would ever have imagined. For all the inevitable disruption that comes with such a move, Jessica, Andy, and Ben have rather quickly settled in to their Chinese life. Jessica and Andy enjoy teaching at XJTLU and find their students bright and receptive and their colleagues stimulating; moreover, the leadership opportunities available on a new campus have enabled them to grow professionally. Ben loves his international school. The family has hiked on the Great Wall and vacationed in such places as the Philippines and Australia. Jessica and Andy sometimes point out, rightly, that the generational cohort to which my husband and I belong benefited from a much more advantageous academic conjuncture than the one that greeted them. But when I compare their career path to ours, I’m struck not only by our obvious (and unwarranted) luck but also by what stick-in-the-muds we were.

Scholars have always traveled, sometimes out of curiosity about the wider world (Tocqueville), sometimes as part of missionary projects (Matteo Ricci), sometimes on the personal invitation of princes (Voltaire, Diderot), sometimes as political exiles, sometimes in response to economic demand for their expertise in other countries. The conjuncture of the opening decades of the 21st century—a combination of increasing global interconnectedness and a shortage of posts in the United States—may make a period of employment abroad a hallmark of the current generation of young American PhDs. It is not a strategy for everyone, but it has a long pedigree.