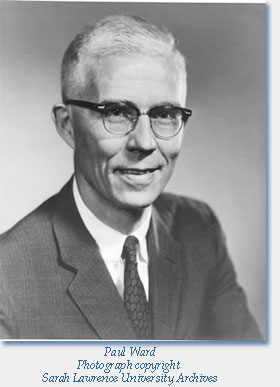 Paul Langdon Ward, the American Historical Association's executive secretary from 1965 to 1974, died on November 13, 2005, in Gwynedd, Pennsylvania, at age 94. He was survived by his wife (Catharine Frazee Wakefield Ward), a brother, daughter, and three sons.

Ward's parents were United States citizens working as medical missionaries in the Middle East when he was born at Diarbekr, Turkey, on February 4, 1911. His lifetime of service to others—especially to the historical profession—drew upon this family model. He took a BA degree from Amherst College in 1933 (Phi Beta Kappa), then an MA (1934) and a PhD in history (1940) from Harvard University. He was an assistant professor of history at Russell Sage College (1941–42), and a research technician at the Office of Strategic Services and the Department of State (1942–46).

Ward moved to China as professor (1946–50) and acting treasurer (1947–48) at Huachung University. With Maoist forces descending on the countryside, it was deemed prudent for Ward and his family to leave for the United States. He spoke movingly of that train ride to the coast. The rail cars were patterned on the European style of compartments for eight people. From Huachung and at each subsequent stop, a Chinese couple would enter the compartment, ride silently to the next station, exit, and be replaced by another couple in turn. That Ward's university friends had arranged this “safe escort” for him and his family to their port of embarkation reflected the esteem that his personal and professional conduct had earned among his Chinese associates.

Paul Ward joined the history faculty at Colby College (1951–53), and then became department head at Carnegie Institute of Technology. In this latter capacity (1953–60), he guided his colleagues through a revamping of the Western civilization courses, shaping them along the lines of the document-based or discovery methods that became so popular throughout the historical profession in the 1960s.

Ward served as president of Sarah Lawrence College (1960–65), where he demonstrated a lifelong concern for women's educational and career opportunities. In spring 1965, he brought his many talents and enthusiasms to the AHA headquarters at 400 A Street, SE in Washington, D.C.
His arrival was particularly important for two reasons. Notwithstanding the generous efforts of two senior scholars who held the post in consecutive years, the Association had not had a full-time, permanent executive since 1963, and Ward's appointment coincided with the multiple opportunities of Lyndon Johnson's Great Society funding of humanities and social science projects. Ward set out with three ambitious objectives: to promote research and scholarship; to enhance history instruction in schools, colleges, and graduate programs; and to make the AHA a visible and effective partner among the foundations, governmental agencies, educational organizations, and congressional committees involved with academic issues nationally and in Washington, D.C.

Early in Ward's tenure, the AHA coordinated the Belmont Conference on bibliographical services available to historians and the Ann Arbor Conference on the uses of statistical methods in historical research. He expanded the work of existing AHA committees, launched a half-dozen new ones, and enticed all sorts of historians and teachers to join in. A man of skillful persuasion, he engaged many of the profession's leading figures to shoulder committee assignments or act as AHA liaisons to other agencies. When Congress expanded the National Defense Education Act (an American response to Sputnik) to include history instruction, Ward drew a couple hundred college and university faculty to a national conference in Colorado (1965) to brief them on how best to establish NDEA institutes for history teachers in the schools. Two years later, he did the same in St. Louis in a three-day workshop for historians eager to apply for the various programs financed by the federal government. In 1969, Ward was instrumental in mobilizing the prestigious organizations in the American Council of Learned Societies with the United States Office of Education to establish CONPASS (Consortium of Professional Organizations), which focused on the training of teachers who would become the trainers of future teachers in the various ACLS disciplines.

Ward never wavered in his commitment to professional standards or social justice. In 1966–67, the AHA joined with the Organization of American Historians (the Joint Committee for the Defense of the Rights of Historians under the First Amendment) to try to prevent Helen Clay Frick (daughter of the late 19th-century steel baron) from stopping the publication of Sylvester Stevens' book on grounds that she objected to the author's treatment of her father. After extensive litigation, the judge found for Stevens. As a consequence, all historians were better able thereafter to pursue their research and analyses thanks in no small measure to Ward's sustained intervention. In 1968, he secured the AHA Council's consent to move the organization's annual meeting from Chicago to New York City, because of that summer's police riot at the Democratic National Convention.

As an in-house administrator, Ward was warmly supportive of staff initiatives and flexible hours, especially since the work of the day often involved considerable travel to help nurture projects generated either in the field or from AHA headquarters. At 400 A Street, he set in motion the early rounds of computerized processes the better to meet members' needs. He also helped to shape the constitutional reforms of the early 1970s that democratized the nomination and election of AHA officers and expanded the vice presidencies to the three current divisions.

Ward's own field of specialization in history involved Tudor England and historical theory. In his career, he was a member of the Board of Directors of the Harry S. Truman Library Institute, a fellow of the Society of Religion in Higher Education, and a member of the Medieval Academy of America, the Organization of American Historians, the Conference on British Studies, and the American Association of University Professors. In retirement, he devoted himself to committee work within the Episcopal Church and to the publication of its texts in the peace movement. He was by any measure an extraordinary man, exemplary as an historian, as a persistent advocate of human rights and reasoned discourse, as a colleague, and as a friend.