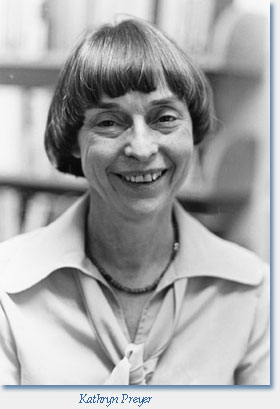 Kathryn Preyer passed away on April 19, 2005, at the age of 80. She received her BA from Goucher College and her PhD from the University of Wisconsin. Apart from a single year as an instructor at Rockford College, she spent her entire teaching career in the history department at Wellesley College, where she was a dedicated and unusually successful teacher of early American, American legal and constitutional and other subjects in American history. She was devoted to her students and to the college, and known for the uncompromising rigor of her historical approach. She asked no less of her students than she did of herself, and she was one of the finest researchers in her primary field—the history of American constitutional law in the late 18th and early 19th centuries.

Kitty Preyer was a fine and distinctive scholar. She was, in Isaiah Berlin's terms, a hedgehog, devoted to knowing "one big thing." Her "one big thing" was the role of law in the creation of the American republic, and especially, the role of judges in articulating that law. Everything she wrote over her long and productive career spoke to that problem, and of course the choice of that problem resulted from her "single central vision," that the rule of law, supervised by a competent judiciary, is the key to the success of democratic society. Her related sub-theme concerned the democratization of the criminal law in a constitutional regime. She sometimes personified the problem by analyzing judicial appointments, especially in her great article on the selection of John Marshall as Chief Justice of the United States.

Kitty Preyer was of course an historian, not a lawyer, though she spent a year (1962–63) as a Carnegie Fellow at the Harvard Law School, which became very much a home away from home for her. She was a student of Merrill Jensen and Merle Curti at the University of Wisconsin, where she was particularly influenced by Merrill's devotion to the rigorous analysis of source materials and to both his and Merle's profoundly progressive understanding of the origins of our national state. Her dissertation was a study of the Judiciary Act of 1801, a piece of legislation still one of the cornerstones of the federal judicial framework, and a work of scholarship that has never been replaced or surpassed in nearly 50 years. In it, and in her later work, she displayed a dual competence in history and law, perhaps the first of the historically trained legal historians to do so.

Merle and Merrill taught Preyer that style was related to content, and she never forgot. Hers was a style that was quietly magisterial—Hemingway meets Oliver Wendell Holmes.

Kitty Preyer was a political historian of the law who understood fully that law resides in a social and political system. Alas, her faithfulness to documentary evidence (a commitment she brought to her long advisory support of Maeva Marcus' Documentary History of the United States Supreme Court) and her reluctance to publish until she had her ideas and text "just right," meant that she did not put into print much of the groundbreaking research that she had undertaken. The deeper point is that her relatively parsimonious publication record, in part the result of her primary dedication to her role as undergraduate liberal arts teacher, belies the huge influence she has had over the years on the scholarship of early American legal history and, more indirectly, on public understanding of the primary role of law in American history. Reading over her list of publications, one realizes that she reviewed every significant book in early American legal history published since 1958 for one or another of the major scholarly journals. These reviews are a remarkable tribute to the breadth of her knowledge, the depth of her historical insight, and her uncanny ability to criticize without hurting. She was, in my judgment, among the great legal historians of the last half century. Her gem-like essays will always be monuments to her unique amalgam of intelligence, originality, breadth of vision, historical sensitivity and deeply humane vision. That her scholarship on the early 19th century remains so germane to today's conflicts of law and politics is a testament to the enduring worth of what she wrote.