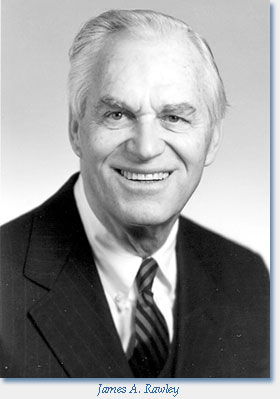 James A. Rawley, a widely respected historian of the Civil War era and American race relations and a biographer of Abraham Lincoln, died on November 29, 2005, in Lincoln, Nebraska, at the age of 89. A native of Terre Haute, Indiana, Rawley earned his BA and MA at the University of Michigan. After serving in World War II, he studied at Columbia University under Allan Nevins, David Donald, and Merle Curti, receiving his PhD in 1949. Rawley taught at Hunter College and Sweet Briar College, where he published his first book, Edwin D. Morgan: Merchant in Politics, 1811–83 (1955), and served as chair of the history department for four years and chair of the Division of Social Studies for three more.

After moving to the University of Nebraska in 1964, Rawley was chair of the history department for a decade while writing four more important books on the Civil War era, with an emphasis on race, slavery, and emancipation. His Turning Points of the Civil War (1966) won an immediate and lasting audience on campuses across the country. Introducing generations of undergraduates to the political and military events of the Civil War, the book is still in print after 40 years. In 1969, Rawley published what is possibly his best known book, Race and Politics: "Bleeding Kansas" and the Coming of the Civil War, recognized as that generation’s definitive account of popular sovereignty in Kansas Territory during the 1850s. Meanwhile, he edited another popular book, Lincoln and Civil War Politics (1969), that joined Turning Points as a perennial classroom favorite. After yet another book on the Civil War era—The Politics of Union: Northern Politics during the Civil War (1974)—Rawley adopted an innovative quantitative approach to historical research in The Transatlantic Slave Trade: A History (1981). In a painstaking analysis of fragmentary sources, he contributed to the systematic attempt to identify the origins, destinations, and eventual fates of the more than 10 million Africans who suffered enslavement throughout the Americas. Sharing the common themes of race, slavery, and emancipation, these six books have commanded regular use and durable respect from a generation of scholars and history students. Meanwhile, Rawley published a long list of influential articles, including his most frequently read and cited, "The Nationalism of Abraham Lincoln" in Civil War History (1963).

During his 23 years at University of Nebraska, Rawley won most of the highest honors that the university bestowed, including the Outstanding Research and Creative Activity Award, the Carl Happold Distinguished Professorship, and the Pound-Howard Distinguished Career Award. Upon retiring in 1987, he continued to research and write, mentor junior colleagues, and contribute to the historical profession at large. In 1990, he published Secession: The Disruption of the American Republic, 1844–61, tracing the origins of the Civil War for undergraduates, and then accepted the challenge of writing a complete, one-volume biography of Abraham Lincoln, Abraham Lincoln and a Nation Worth Fighting For (1996). In his last book, London: Metropolis of the Slave Trade (2003), Rawley returned to the subject of the transatlantic slave trade. The University of Nebraska Press will publish two additional books, A Lincoln Dialogue and New Turning Points of the Civil War, which were in manuscript at the time of his death.

Throughout his 60-year career, Rawley contributed energetically and generously to the historical profession as a longtime and active member of the American Historical Association, the Organization of American Historians, the Southern Historical Association, the African Studies Association, the Association for the Study of African American Life and History, and the Abraham Lincoln Association. Among other professional distinctions, he was a fellow in the Royal Historical Society and a fellow in the Society of American Historians. In Nebraska, Rawley contributed to the Nebraska State Historical Society as its president, a member of its Executive Board for 20 years, and a trustee of its Foundation for nearly three decades. He was perhaps most widely recognized for establishing the OAH’s James A. Rawley Prize, which honors and encourages outstanding scholarship in the history of American race relations, passing on the torch, so to speak, to the next generation of historians of race, slavery, and civil rights. In 1998, a gift to the AHA established the Prize in Atlantic History, which recognizes outstanding historical writing on Atlantic worlds before the 20th century.

Renowned for his generous support for scholars throughout our profession, Rawley was personally self-effacing but intellectually forceful, an ideal colleague and a warm friend to all who knew him. University of Nebraska President James B. Milliken, who studied under Rawley, characterized him "as an extraordinary scholar and teacher and an important presence on the campus for many years," concluding that "I am among the many who will miss him greatly." He is survived by his wife of 60 years, Ann, two sons, and three grandchildren.