Highlights of the 120th Annual Meeting 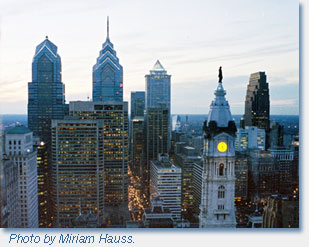 More than 5,500 historians came to Philadelphia to attend the 120th annual meeting of the American Historical Association, held January 5–8, 2006. Returning after 43 years to the city where it last met in 1963, the AHA not only found a city in a celebratory mood—commemorating the tercentenary of Benjamin Franklin, one of its most famous citizens—but was also fortunate to have balmier weather than could be expected. 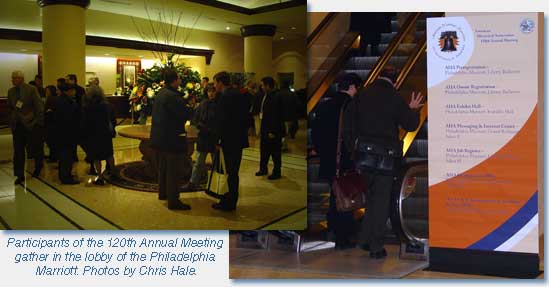 It was a perfect setting for what was essentially a recasting of the annual meeting. All the traditional features were there: the plenary session, the book exhibition, the Job Register, the presidential address, the awards ceremony, the multitude of regular panels, and the business meeting. Then there were the innovations introduced this year: roundtables, precirculated papers, poster sessions, and "experimental" offsite sessions, all designed to provide more opportunities to more scholars while also giving greater scope for discussion and debate.

Building on a recently invented tradition, the AHA launched the 120th annual meeting early on Thursday afternoon with a workshop for directors of graduate studies (which was, in fact, open to anyone interested in graduate education). Participants discussed challenges faced by those who conduct graduate programs and examined some available tools for solving problems. Several other sessions on this first day included one intended to provide guidance about the meeting to new attendees, a presidential roundtable session that focused on civic and ethnic dichotomies, and a precirculated paper session on new interpretations of the civil rights movement. 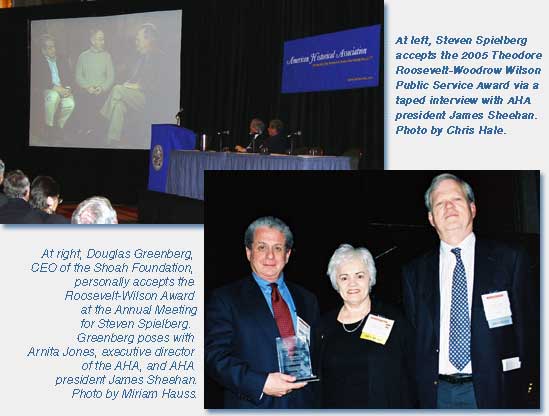 The highlights of Thursday evening were the presentation of the AHA's Woodrow Wilson-Theodore Roosevelt Public Service Award to Steven Spielberg, the founding chair of the Survivors of the Shoah Visual History Foundation, and the plenary academic session. The award was received on behalf of Spielberg (who could not attend) by Douglas Greenberg, the president and chief executive officer of the foundation, who said that Spielberg stated that he was accepting the award on behalf of the 52,000 survivors of the Holocaust who sat for the cameras [and recorded their histories]. A brief film of a conversation between Greenberg, AHA President James Sheehan, and Spielberg was screened for the large gathering. 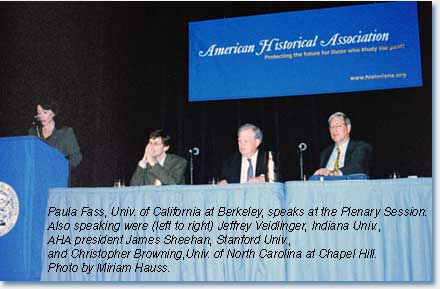 The plenary session, which was chaired by Sheehan, focused on a discussion of the relationship between history and memory, looking in particular at eyewitness accounts as historical sources. The panelists, Christopher Browning (Univ. of North Carolina at Chapel Hill), Paula Fass (Univ. of California at Berkeley), and Jeffrey Veidlinger (Indiana Univ.) described, from multiple perspectives, the varieties of memories, the modes of their transmission, and the ways in which they can be used by historians.

Sessions, Open Forums and Other Presentations

As always, choosing a session to attend among the many that were offered in any time slot—those sponsored by the AHA as well as those organized by 46 affiliated societies—was perhaps the most difficult task for the enthusiastic attendee. The overarching theme of the 120th meeting was "Nations, Nationalism, and National Histories." Not surprisingly, a large number of sessions were devoted to explorations within this rubric, but there were also many that were not (like the panel on Sunday that focused its attention on the Mughal emperor Babur, or the Saturday session on the shaping of gender identity in the medieval world). In addition to the usual luncheon meetings and receptions, which provided an opportunity to meet fellow scholars on a more informal plane, there were many open forums that facilitated discussion. Three new modes of presentation also attracted particular attention this year, with roundtables (including one on blogging) proving the most popular, perhaps because they allowed for a freer exchange of ideas. The poster session (located in the Millennium Hall of the Loews) was also considered interesting, as it gave an opportunity to interact with the presenters in a less structured but more direct manner. 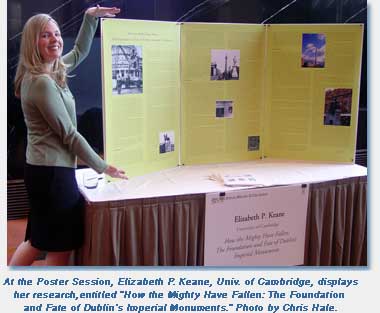 The experimental sessions—especially the session involving daylong consultancy visits to local museums—also proved successful innovations that could usefully be repeated.

Among the regular sessions were those dedicated to explorations of a single work or one scholar's oeuvre. An overflow crowd attended the session that focused on Roger Chartier and his work, for example. Also noteworthy were the three sessions organized by the Scholars' Initiative on Yugoslavia, in which the panelists examined the complexities of creating historical narratives in a conflicted region.

The prime events of Friday were the awards ceremony and the presidential address. Linda Kerber, the president-elect for 2006, announced the awards, and James Sheehan, president for 2005, presented them to the winners (see the related article). 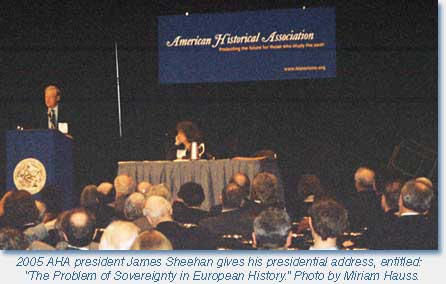 In his presidential address entitled "The Problem of Sovereignty in European History," Sheehan, in unadorned, but captivatingly direct and pellucid prose analyzed the nature of the elusive concept of sovereignty. A major problem, Sheehan said, was the tension between sovereignty as theory and the "messy reality" of sovereignty as practice. (see the full text of the address in the February 2006 issue of the American Historical Review).

At the 120th Business Meeting of the AHA, held on Saturday, January 7, 2006, the reports of the executive director, the division vice presidents, the nominating committee, and of the new editor of the AHR were presented. Two resolutions—one on the government's policy on treatment of foreign prisoners, and one opposing the regulation of the academic community through academic bills of rights—were presented to the meeting and were adopted after some spirited discussion over an amendment moved from the floor, and a rescinded call for a quorum. James Sheehan, the outgoing president, who chaired the meeting (with Michael Les Benedict, AHA's Parliamentarian, providing support from Robert's Rules of Order when needed), symbolically handed over the AHA's historic gavel to the incoming president, Linda K. Kerber, at the end of the meeting. 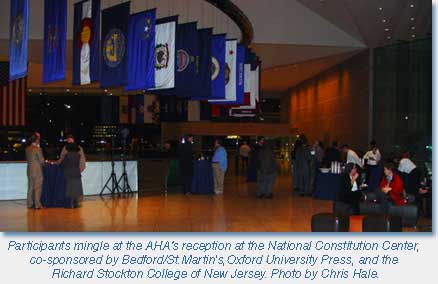 In a unique departure from tradition, the AHA organized a gala event on Saturday in collaboration with the National History Center, and with the support of Bedford/St.Martin's, Oxford University Press, and the Richard Stockton College of New Jersey. Held at the impressive National Constitution Center, the event, to which all meeting attendees were invited, attracted a fairly large gathering. Those who came were able to see the special exhibition on Benjamin Franklin and also had the chance of sitting in on a live, dramatic multimedia presentation entitled Freedom Rising. 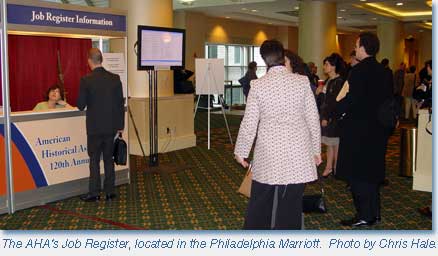 The majority of historians attending the meeting were not looking for a job. But for the 800 or more who were, the AHA Job Register loomed large and was their main focus. More than 1,500 interviews were conducted in 300 plus searches. Notably, perhaps signifying an upsurge in job opportunities, more search committees accepted c.v.'s on site; at the same time, many aspiring job candidates had more prearranged interviews than usual. 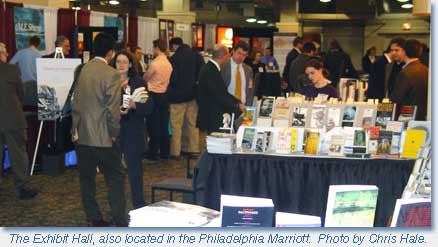 The exhibit hall, located in the Marriott's Franklin Hall, had 97 different companies—mostly book publishers—exhibiting in 145 booths. The larger attendance at the meeting meant that more people spent more time in the hall, sampling—and often acquiring—the many new products on display, from books to CDs. Several of the exhibitors donated items to the AHA, to be passed on to faculty in universities affected by Hurricane Katrina.