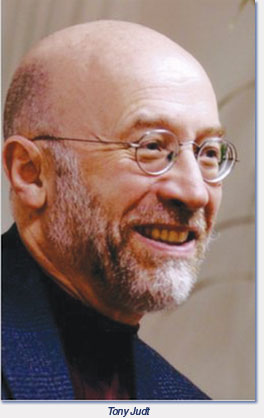 Founder and director of Remarque Institute; scholar of modern Europe

Tony Judt died on August 6, 2010, after a long and courageous struggle with amyotrophic lateral sclerosis (“Lou Gehrig’s Disease”). He held the Erich Maria Remarque chair in European studies at New York University, where he also founded and directed the Remarque Institute.

Born in East London in 1948, he was trained at King’s College, Cambridge, and studied at the École Normale Supérieure in Paris. He taught at Cambridge as well as at Berkeley and Emory before joining NYU in 1987, where he served as a main exemplar and protagonist of its newly deepened commitment to serious scholarship and graduate education. His sympathetic and committed teaching at every level earned him the admiration and devotion of many students. At his death he was increasingly widely known for his historical work, for his intervention in public debates over politics and culture, and for the series of painfully honest and insightful memoirs of his own life and what it was like to live with his disease, published in the New York Review of Books (and which will be issued as a separate volume). He received the Orwell prize in 2009.

His first field of study was French social and working-class history, and the books he devoted to it (notably Socialism in Provence, 1979, and Marxism and the French Left, 1986) exemplified the simultaneous commitment to detailed empirical research, attention to the importance of local situations and differences, and recognition of the crucial importance of big ideas, that would mark him all his life. In those years he was politically and morally close to leftist activism, and his sometimes uncompromising intellectual temperament led him into polemical debates with other historians that overshadowed his substantive work in the eyes of some. A related youthful commitment to socialist Zionism drew him to spend much of the year 1966–67 in Israel, working in a kibbutz, and then as a translator and driver for the IDF after the Six Day War. That experience began a process of disillusionment with a country whose early promise he saw betrayed by militarization and religious zealotry, leading him to become one of the Jewish state’s sharpest critics in the last part of his life. Meanwhile his involvement with radical student groups in the 1970s prepared the ground for a parallel falling away from the intellectual left, moving him toward the highly critical reexamination he would conduct of some of the heroes of Rive Gauche culture and politics (notably Sartre and Merleau-Ponty) in Past Imperfect: French Intellectuals 1944–56 (1992), and later toward his warmly sympathetic account of the moderates and skeptics Léon Blum, Camus, and Raymond Aron in The Burden of Responsibility (1998).

In those works ideas by themselves occupied center stage, but Tony Judt’s earlier manner of considering them in a broad social and political frame returned in Postwar: A History of Europe Since 1945 (2005). Hailed by one reviewer as “the best book on the subject that will ever be written by anyone,” it is the product of exhaustive research in all kinds of sources, moves easily between countries and regions (its familiarity with eastern European people and events deepened by the author’s having learned Czech during the 1980s and establishing close ties with anti-Soviet activists), and combines a sweeping and powerful synoptic perspective with a sprightly attention to little-known and illuminating details. What animates the narrative at its base, however, is an engagement with European ideas, first with the “master narratives”—religious, national, Marxist—whose exhaustion cries out for new modes of analysis and synthesis, with the assumptions on which politicians based their projects and actions, and with what he saw as the vacuous and pretentious notions developed in the opaque language of poststructuralism during the 1970s. Above all the book is enlivened by its commitment to a certain idea of Europe itself, not the unifying faith in enlightened top-down administration that sustains the Eurocrats in Brussels, but a vision of a continent still able to draw energy from its differences, and—with the disasters of fascism, communism, and the two wars behind it, but not to be forgotten—holding the promise that the ideals of democracy and social welfare announced but so often betrayed in the past could find a degree of realization that seemed possible nowhere else. Judt loved many things American and cherished the life he made for himself here, but he remained a European, increasingly worried in the years he worked on Postwar that the move away from social democracy on this side of the Atlantic was creating a growing gap between the two continents, and that many American intellectuals were succumbing to the power of an aggressive and overly self-confident neo-liberalism somewhat in the way their European counterparts had given themselves up to the ideologies of extreme left and right in the mid-20th century. These concerns received elegant and forceful expression in the history and critique of recent social thinking and policy he published only a few months before his death, Ill Fares the Land.

Those who knew Tony Judt will always remember the mix of acuity, sympathy, and good humor he brought to conversations and the astounding power of his memory, which seemed to give him total recall for every one of the endless trove of books and articles he had read and movies he had seen. At NYU he made the Remarque Institute a lively center for contacts between American and European scholars and writers, and he served both as chair of the history department and as dean for humanities. As a colleague and administrator he could be tough and demanding, much in the way he was as a critic of both scholarship and politics, but he was also extraordinarily generous in his intellectual and personal support of colleagues both close and distant. His challenge to himself and others to ground present commitments in the old-fashioned scholarly virtues of linguistic competence, conceptual clarity, and responsibility to both sources and principles strengthened his university, just as it marked his public discourse and gave distinction to his writings.