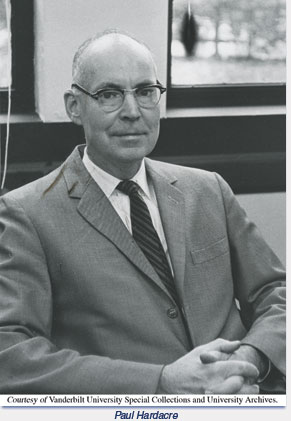 Life member of the AHA

Paul Hoswell Hardacre, who taught for 34 years (1947–81) at Vanderbilt University, died in Pasadena, California, on April 10, 2010. He was 94 years old. A native of Los Angeles, ventured north to earn his BA at Stanford University (1937), then reversed direction to undertake graduate study at the University of California, Los Angeles, where he received an MA in 1940 and the PhD in 1947. His graduate studies were interrupted by service in the Army of the United States, 1941–46, first in the Pacific War, during which he won a Bronze Star, then in the occupation of Japan. After lengthy subsequent service in the Army reserves, Hardacre retired as a lieutenant colonel. While conducting doctoral research at the Huntington Library in San Marino, California, Hardacre met Gracia Louise Manspeaker, whom he married in 1947.

Paul Hardacre’s research and writing focused on Stuart England. He authored The Royalists during the Puritan Revolution (1956), portions of a number of books, and numerous articles. His scholarship earned him a Fulbright Fellowship to the United Kingdom (1950–51), a Guggenheim Fellowship (1957–58), and a National Endowment for the Humanities Summer Stipend (1975). Following his retirement from the faculty of Vanderbilt University, Hardacre again based himself in the Huntington Library, where he researched, processed, and catalogued the large collection of Godfrey Davies papers and several smaller English historical collections. He also produced a valuable handlist of large numbers of microfilms of English historical manuscripts acquired by the Huntington from institutions that housed the manuscripts themselves. Further, Hardacre long served (1960–86) on the advisory (now editorial) board of the Huntington Library Quarterly. In 1993, Colonel Joseph Bampfield’s Apology, co-edited by Hardacre and John Loftis, was published by Associated University Presses, Inc. One episode (“Prudence Versus Passion”) in a British television series, The Trouble with Love, was based on the work.

At Vanderbilt, as V. Jacque Voegeli, dean of the College of Arts and Science emeritus and professor of history emeritus, has put it, “Paul Hardacre served . . . long and ably as a teacher, scholar and participant in numerous councils of the university. He chaired the Department of History from 1967–70, a period of rapid growth. In all that he did, Paul displayed sound sense of purpose, conscientiousness, good judgment and fairness.” Hardacre’s selection as department chair and as chair of the University Committee on the Installation of Chancellor Alexander Heard attest to the high regard in which he was held by all who knew him.  So it was that the university bestowed on him the Thomas Jefferson Award (1971) “for distinguished service to Vanderbilt through extraordinary contributions as a member of the faculty in the councils and government of the University” and the college’s Ernest A. Jones Faculty Adviser Award (1979) for his advising of undergraduate students. On a personal note, Adam A. Hetnal, a Polish-born graduate student who went on to earn his PhD at Vanderbilt, recounts Hardacre’s kindnesses to a newcomer to the department and the United States, including “excellent cups of tea” brewed in Hardacre’s office during their conferences, and Thanksgiving dinner with the Hardacre family.

During Paul Hardacre’s post-Vanderbilt years at the Huntington Library, Mary L. Robertson, then chief curator of manuscripts, recalls, he not only conducted research but regularly attended conferences, lectures, and seminars at which he asked “gentle but penetrating questions,” made “constructive suggestions,” and “introduce[d] himself to new (and especially very young and uncertain) readers in his field.” “A quiet, courtly, and self-effacing gentleman,” he was “respected and liked” “for his kindness, expertise, and generosity.” Robertson also remembers the hospitality of Hardacre and his family to Huntington friends during the Hardacres’ annual August week’s break at Carpinteria, a Pacific beach community.

His wife Gracia Hardacre died in 1987. He is survived by their two children, Helen Hardacre, Reischauer Institute Professor of Japanese Religions and Society at Harvard University, and Alan Hardacre, a software engineer for Hewlett-Packard. Paul asked that there be no public memorial service.  His children request that memorial contributions be made to the Huntington Library, 1151 Oxford Rd., San Marino, California 91108, and designated for the Manuscripts Department.