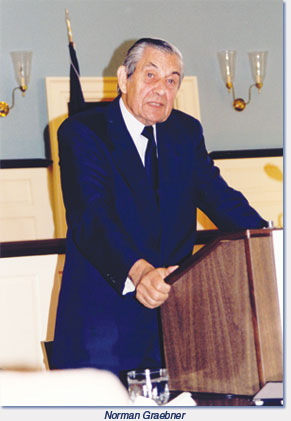 Norman Arthur Graebner, internationally acknowledged as an authority on United States history and American diplomacy and a leading exponent of the realist school in the study of American foreign policy, died after a brief illness at Charlottesville, Virginia, on May 10, 2010, at the age of 94. He was born in Kingman, Kansas, on October 19, 1915, and came of age in Milwaukee. He attended the University of Oklahoma and served in the U.S. Army’s occupation forces in Japan during 1945–46. After earning his PhD at the University of Chicago in 1949, where he studied under Avery Craven, he taught at Iowa State University and the University of Illinois before joining the history faculty at the University of Virginia.

Graebner was Randolph P. Compton Professor of History and Public Affairs emeritus at the University of Virginia and recipient of the university’s highest honor, the Thomas Jefferson Award. “He has lived the scholar’s life with qualities of intellectual vigor, human kindness and collegiality that few can equal,” University President John T. Casteen III noted. “In an age when the term ‘gentleman and scholar’ may be used loosely, he was the real thing.” Graebner received many other awards, including honorary degrees from more than a half-dozen universities, and was a Harold Vyvyan Harmsworth Professor of American History at Oxford University and a Thomas Jefferson Visiting Scholar at Downing College, Cambridge.

When Graebner was appointed to the faculty of the University of Virginia in 1967, students at the University of Illinois felt abandoned, and a touch peeved. “University administrators at Urbana were indignant that one of their most brilliant university lectures and seminar conductors had been lured away,” claimed Virginius Dabney in Mr. Jefferson’s University. His diplomatic history classes at both Illinois and Virginia were overflowing, frequently numbering in excess of 500. At Champaign, one of his classes was aired directly over the radio to an estimated 75,000 listeners. Former students remember Graebner as a dedicated teacher with carefully honed lectures and as a speaker who delivered them eloquently. “I have never heard an instructor give such spellbinding addresses,” a former student at Charlottesville recalled. Another former student remembered “the energy and the passion” that he employed in his lectures. Not surprisingly, Graebner took considerable satisfaction in being a good teacher. In his A Twentieth-Century Odyssey: Memoir of a Life in Academe (2002), he noted: “Teaching is largely a private matter, and no university condemns service to students in all of its forms. How faculties respond to the challenge of teaching reflects, in large measure, a sense of calling, perhaps a feeling of obligation, and the prospect of rewards in personal satisfaction.” But he also recognized that research and writing—the pulling of one’s thoughts together in an organized fashion—also was important to the process of distilling ideas.

Graebner was the author, co-author, or editor of more than 30 books and some 130 articles, essays, and book chapters. Included among his most influential works dealing with diplomatic history and American foreign policy are Empire on the Pacific: A Study in American Continental Expansion (1955, 1983); The New Isolationism (1956); Ideas and Diplomacy: Readings in the Intellectual Tradition of American Foreign Policy, with commentary (1964); Foundations of American Foreign Policy: A Realist Appraisal from Franklin to McKinley (1985); America as a World Power: A Realist Appraisal from Wilson to Reagan (1984); and Reagan, Bush, Gorbachev: Revisiting the End of the Cold War, with Richard Dean Burns and Joseph M. Siracusa (2008). He was the lead author of American and the Cold War, 1941–91: A Realist Interpretation (2010), also with Burns and Siracusa. At the time of his death, Cambridge University Press had accepted his manuscript, prepared with Edward Bennett, The Slow Death of Versailles for publication in 2011.

The distinguished historian Walter LaFeber observed that “Graebner, in both his publications and popular lectures, gave ‘realism’ a needed scholarly historical basis.” Graebner repeatedly warned that references to such criteria as morality and legality, frequent in the practice of American statecraft, often muddled matters of state interest. Consequently, he was critical of such idealistic presidents as Woodrow Wilson, who proved one of its most stubborn practitioners. In America as a World Power (1984), he questioned those “moral and legal principles that left no room for change.” Another president, the wily Franklin D. Roosevelt, was imprecise, too often captured by his interest in the “internationalist creed” and an illusory interest in abolishing such notions as “spheres of influence.” Graebner was also acutely aware of the dangers posed by military interventions for ill-defined purposes. He reminded his audiences that wielders of American power often were tempted by that vision President John Quincy Adams feared most of all: that the United States might attempt to become dictatress of the world.

It is in his reading of the Cold War that Graebner is, in many ways, both impressive and devastating. For him, the Cold War was something akin to a farce of ideological perversity. American assertions that the conflict was being waged for liberty were nothing short of ridiculous. Containment was a policy that was bound to go pear shaped, and pear shaped it did—in the bloody theatres of Indochina. Wither, then, the idea of American exceptionalism, which pales in the broader arena of state self-interests. Calculate and be cautious, or be damned. One of his last works, co-authored with Richard Dean Burns and Joseph M. Siracusa, reaffirms the realistic critique of the Cold War after the fact.

He is survived by his wife, Mary Moon Graebner; a son, the Rev. N. Brooks Graebner of Hillsborough, NC; a daughter, Emily Tillotson of Rapid City, SD; and three grandchildren.